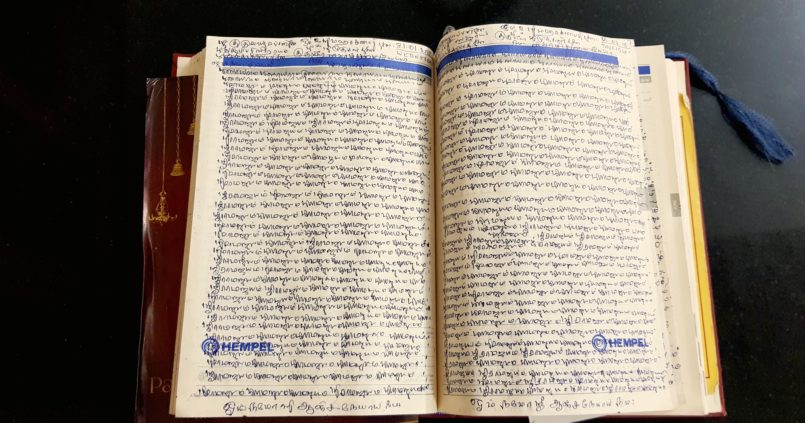 My grandfather, my thatha, has always been a man of habit. At age 89, he still goes out for a walk every morning. He still counts the exact amount of money in his pocketbook before stepping out and accounts for every anna spent when he returns home. He lights the diya every evening. For a few decades now he has been taking his medicines before every meal. These days he also spends the morning studiously deleting unwanted good morning messages from his WhatsApp feed. And, for as long as I have known him, when he is done with a bath, he spends a portion of the day in front of a diary writing out the same thing, over and over again.

Since 1987, not long after he retired as Class II Income Tax officer, thatha has been filling up one page a day with the words Sri Rama Jayam, meaning Jai Sri Ram in Tamil. Every single day, the same words repeated until they cover the entire page. He doesn’t use a special pen. Ordinary ball-points are fine. And he doesn’t need special paper. Any notebook will do actually, though for decades now he has been using diaries emblazoned with the names of the companies his sons work at. The handwriting does not matter either, although he does print clear, legible letters with no sign of tedium at having written the same thing over and over again. The point isn’t calligraphy or aesthetics. The diaries are not meant for anyone else to see.


The internet tells you many things about Rama Koti or Likhita Japam, the practice of meditating by writing the name of the divine. You will find blogs that speak of the physical and mental health benefits of writing Sri Rama Jayam, YouTube videos that advise parents on the best technique for their children to get into the practice, stories of people getting Limca records by writing the words out to form pictures from the Ramayana, discourses on how the word Rama predates Vishnu’s seventh avatar and explanations for how dedicating your life to the phrase does not mean discarding Shiva (the ‘ma’ in Rama, according to this view, comes from Om Nama Shiva, and so Sri Rama Jayam allows you to venerate both Vishnu and Shiva simultaneously).

But thatha isn’t inspired by any of these theories. Others in the family, including his father and mother, occasionally wrote Ramajayam as well, but without any consistency. Until it was his chitti, his aunt, who left a deeper impression. In 1981, with his retirement still half a decade away, thatha, then living in Bombay, visited North India, a trip that took him to Vaishnodevi in Kashmir and the Char Dham in Uttarakhand. But it began in Delhi, where his chitti – who had four full books of Ramajayam – asked him to take those up to Badrinath and when he was in the banks of the Alaknanda, one of the headstreams of the Ganga, to tear our each page and drop it in.

“She believed that when you drop it in, the effects of her devotion will be on all the people who dip into the river. So I did that. I tore out each sheet, and I put it into the river,” he said. “That was an impetus… it was there before but now it stayed in my mind. When I was in my office I couldn’t devote time to it. But as soon as I retired, I started.” He retired on October 31, 1986. That December or at the latest by January 1987, he began writing Ramajayam. At first in diaries that he had collected from his office, later in those of his son’s companies. And he hasn’t stopped since.

“I feel guilty if I don’t write it. There is no rhyme or reason for this, I’m not doing it for anyone, but it is that way.”

If he happened to miss a day or more – like the week he spends on the pilgrimage to the shrine at Sabaramalai every year – he makes it up when he is back home. As far as thatha can tell, and knowing my grandfather this is not something he would say lightly, he has not missed a day in 31 years. We did a rough calculation while talking about how much he has written. 200 times a day. Every day of the year. Since 1987. Even with the most conservative estimate, that comes out to 2.2 lakh times.

When I mentioned this number, thatha is hardly moved. “There was one person who managed to write it 1 crore times. Of course, all of his day was spent writing Sri Ramajayam, there is no way you can manage that many times otherwise, but still, it is 1 crore.”

Thatha’s Ramajayam books are not in one place. Indeed, their spread is almost a map of the homes he has spent time in over the years, across the houses of his four sons and a few other locations: an old-age ashram that he helped run in the family village in Tirunelveli, in Tamil Nadu’s far south; a retirement community in Coimbatore; a family house in Bombay; and maybe even a few at my parents’ house in Doha. But each one looks alike and having seen them all my life, I could recognise one anywhere. A classic company diary, with good paper stock. The book somewhat thicker than its original heft, because each page has been filled to the brim, margins and all. Opening older ones might include remnants of the past – a pamphlet that thatha was looking at then or a receipt. The current one will have the pen tucked into it, and usually a photograph or two, that he’s holding on to for the moment. The same words might fill every one of them, but each one is also the fruit of a year’s labour, and so carries the memories of those 12 months.

Unlike his chitti, thatha does not have a clear plan for what he would like done with the books, in part because they are not in one place. “Once I thought of giving them to the Chinmaya Mission. In some temples, like the one in Sidhbari, they invite people to send in their Ramajayam books and keep them in a room under the sanctum sanctorum. But I don’t have a clear plan. I also don’t have the patience to roll each page and make it into a garland, like they do at Anjaneya temples.”

If someone were to do something with his books after he is gone, thatha says, he would like them donated to a temple. But he reiterates that he did not think of how to dispose of them, and that is not why he wrote Ramajayam all these years. It is not even about Ram. Thatha insists he cannot call himself a Ram bhakt, and is happy to worship at all temples.

“Somehow I have done this. It stuck in my head, and I started doing it and I have done it all this time. I can’t explain it. It gives me peace of mind, and that is what matters.”