In pursuit of a prayer 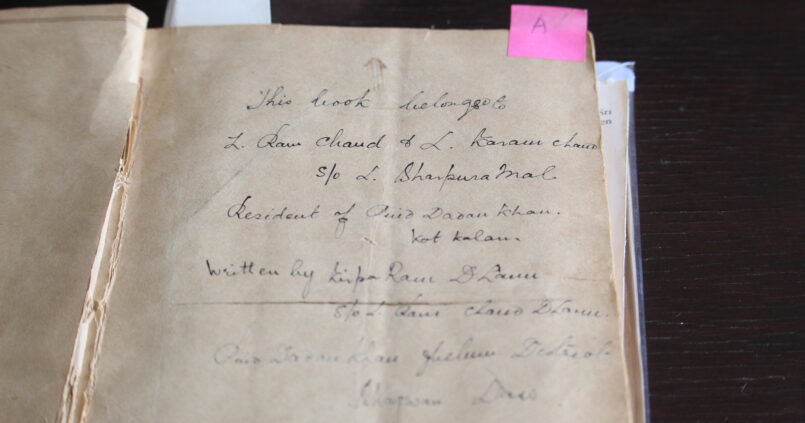 In the chaos and confusion of the Partition exodus, as people scrambled to carry with them objects of value and utility, it is remarkable that my grandfather, Kirpa Ram Dhawan, chose to carry with him 2 bound volumes of books belonging to his father dating back to the 1870s. Even more remarkable is that these volumes have survived for another 70 plus years, being handed down from him to my father, and then to me. They are the only physical manifestation of my paternal family’s life pre-1947 that I have ever seen. The link is not just to pre-Partition Punjab, but all the way back to the 19th century and my great-grandfather and great-great-grandfather.

The importance placed on such a book by the family is not surprising. My father, Yudhishtar Raj Dhawan was an avid reader, and I grew up surrounded by books. I remember my father’s mother and elder sister, who didn’t receive too much formal education, too were avid readers of Hindi books. My father shared with me that although he and his sister were very close, their only disagreements when they were growing up were over who would get to read a newly acquired book first.

This story starts with what was just an attempt to find a physical object relating to my family’s history and heritage for an online course writing assignment in 2019. It was the beginning of a fascinating journey of discovery where through a handwritten manuscript, I learned about my great-grandfather, Ram Chand Dhawan (1843-1903), his life and his reading habits. I learned about Sufi poetry, its importance and prevalence in Punjab, and of a particular acrostic style known as Siharfi; I learned about the significance of the Urdu language to north-west undivided India; and I probably found out the subliminal reasons why I started learning Urdu post my retirement in 2019.

While hunting for objects, I remembered a couple of old books that been given to me by my father several years earlier and on examination, I found a collection of books, written in the Perso-Arabic script, bound together. In the type-written notes that my father had thoughtfully inserted into the books, he mentioned that these books in Urdu, Punjabi and Farsi had belonged to his grandfather, my great-grandfather. These notes are printed on plain paper and pasted on the inside covers of the books. They were probably intended for his children and descendants, who he assumed would not know how to read Urdu or understand the context.

What however caught my particular attention was the reference made to a 5-page prayer handwritten by my forefather that was included in one of the volumes. I located it and found it to be written in a beautiful calligraphic hand that I first mistook for printing. It was on plain rectangular paper, yellowed and fragile with age. The title page was more decorated than the rest and the pages were framed and panelled. The writing was contained within thin ink line borders and was in two columns separated by a coloured divider on each page.

I tried to make out what the Urdu text said. However, I struggled with the hand-written flourishes and was not sure if I was reading classical Urdu, Farsi or Punjabi. I was just able to make out the invocation at the start of the text which said Ya Rab, Mushkil Kusha (O Lord, Remover of Difficulties) which certainly sounded like a universal and enduring entreaty, and the right note on which to start this voyage of discovery. This was definitely an invocation and not a title since it had no direct relation to the text.

On having made this discovery, I was now resolved to try and get the text translated to fully understand what it contained. My initial attempts revealed that it was indeed in archaic Punjabi rather than Urdu, but I had trouble finding someone with the knowledge necessary to do a faithful translation. Fortunately, through friends I was introduced to Afzal Saahir, a prominent Lahore-based Punjabi poet, culturist and radio host who agreed to undertake the transcription of the hand-written text and then translation of the prayer into Urdu. He also kindly offered record a vocal rendition of the prayer once the translation work was completed. One of the other books I found had a bookplate indicating the date of June 8, 1876 when the book, Heer Waris Shah, was purchased and the name of the bookseller, Qutub-al-Din, in the town of Talagang. It is a reasonable assumption that the prayer is too from around that time period.

The verse is high quality, and the text very much followed in the Sufi tradition of Divine Love. The prayer is 116 lines long, comprising 29 verses of 4 lines each. Each verse has its own rhyme pattern that is repeated through the 4 lines. A particular point of interest in my father’s notes was the fact that each stanza began with a successive letter of the Urdu alphabet, staring with “aliph”, moving on to “bey” etc. Afzal confirmed this and told me that this acrostic style of verse was known as Siharfi and was particular to Punjabi Sufi poetry. This style had been employed by prominent Punjabi Sufi poets over the years as well as the Sikh Gurus in their scriptures.

What also emerged was the presence of the “takhallus” or pen name of Manjh Bhan which was included, as is customary, in the last line of every verse. We were not able to find any other information or work under this name. The translator wondered if it was my great grandfather’s pen name. I had no evidence to support that supposition. Since there is no reason to think it was my forefather who had penned the religious verse under this name, one can only assume that this piece of work was known to my great grandfather and that the work moved him enough to want to write out the entire 116-line prayer in his own hand and to keep it safely for posterity.

The transcription and basic understanding of the text led me explore more into my great-grandfather’s life through family histories that my father and his two brothers had compiled. Ram Chand Dhawan (1843-1903) was the elder son of Dewan Bharpura Mal Dhawan of Pind Dadan Khan, District Jhelum, Punjab. Dewan Bharpura Mal had served Maharaja Ranjit Singh and had been given the title of “Dewan”, that he and his eldest male descendants continued to use.  Ram Chand completed his schooling in Lucknow, living with his maternal uncle who served as a Deputy Collector there. He then returned home to Punjab. Ram Chand had a successful career in the Public Works Department and retired to the family home in Pind Dadan Khan, living comfortably off income from his properties.

Pind Dadan Khan is a town in the Jhelum District, Punjab, Pakistan. It is located on the banks of the Jhelum River, 243 km NW of Lahore, and is off the present-day expressway going north from Lahore to Islamabad. This is where Ram Chand Dhawan lived, and where my father was born and did his primary schooling in Urdu. The family then moved to Lahore where my father completed school and college in Hindi and English.

Ram Chand had one son, Kirpa Ram (1888-1975), my grandfather, who was born relatively late in Ram Chand’s life. When Ram Chand Dhawan passed away in 1903 at the age of 60, he left behind his wife, Draupadi Devi and his son who was then just 15 years old. My father and his siblings never got to meet their grandfather. They however had fond memories of their grandmother, who they called Bey-Bey.

An amusing anecdote from my process of discovery relates to writings on a piece of paper that was pasted on one of the blank pages in one of the bound volumes. Family notes indicate that it is in the hand of Dewan Bharpura Mal, Ram Chand’s father. I was very eager to figure what my great- great-grandfather had written. This is what it translated to “pooja shakkar, chawal, misri, shehd, moong sabz” (prayer sugar, rice, rock sugar, honey, moong vegetable).  I thereby learnt about that worthy’s grocery buying habits, which I suppose are as much a part of my heritage as the other material. The only reason I can think of preserving something so prosaic was that it was a rare surviving sample of his handwriting.

My journey is not yet complete. I am in process of translating the Urdu translation into Hindi, trying my best to retain the poetic cadence. One that is done, I will undertake a translation into English.

To my father, Yudhishtar Raj Dhawan, and his elder brother, Sri Krishan Dhawan, for having preserved Ram Chand Dhawan’s legacy, and for passing it on to me. This effort is dedicated in their memory with great love and affection.

To my father’s younger brother, Prahlad Bhagat Dhawan, who collated the family’s history, the Dhawan Gatha, from which the information on Ram Chand Dhawan is taken.

To Vikram Nair, Gurgaon and Dr. Durre Ahmed, Lahore for introducing me to Afzal Saahir.

To Afzal Saahir for having taken on the work on translation with such enthusiasm and for having made a wonderful reading of the original text.