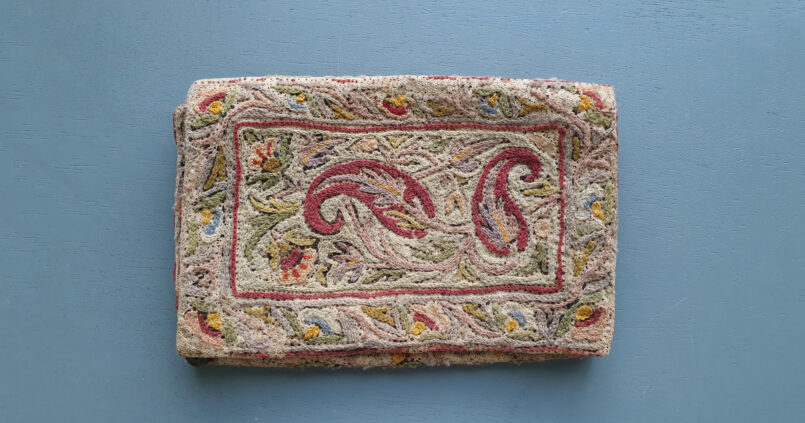 This is the story of Fakhr-u-nisa and her purse. But his is also very much my story too. From a young age I was drawn to objects that carried with them the weight of history and memory.

I grew up in Abu Dhabi and moved to Lahore after the sudden passing of my father in 1987. My dadi would often come and stay with us in our house on Sarwar Road, Cantonement. I loved her unconditionally and yet her visits made me sad. Draped in a white char-moam ka dupatta she would move around the house in slow measured steps. She would walk to every framed photograph of my father displayed around the house, and clean it with the edge of her dupatta. Inevitably she would begin to cry. My mother would often console her by giving her one of my father’s personal belongings – his toothbrush, his wallet, his leather folder….

The years rolled by and around the time I was preparing for my Senior Cambridge exams as a teenager, I asked her to bring me something of hers to remember her by. From my own prized possessions at the time, I decided I would give her my silver pendant that read ‘Saba’, in Urdu, as a measure of fair trade. I had memories of her trying to wake me up in the morning as I buried my head under the pillow. She would recite every Urdu or Persian couplet she could think of with my name in it. I would toss and turn irritably with my mother tut-tutting close by.

On her next visit, as promised, she took out from the folds of her dupatta, an embroidered purse, as frail as her hands. She was almost 90 years old at that time and there was an enthusiastic consensus in the family that she would live to be a hundred. As she handed me the purse, she explained that it was a souvenir that her husband – my dada – Gulam Hussain Khan Qizilbash, had brought back with him from one of his business trips to Kashmir. Even at that age, I remember feeling deeply honoured and immensely proud of now being the owner of this heirloom.

The envelope clutch purse measures 6 inches in width and 4 inches in height. It is covered in very fine crewel embroidery – a type of surface embroidery using wool and a wide variety of different embroidery stitches. The purse was handmade in Srinagar, Kashmir and gifted to my grandmother roughly ninety years ago.

Fakhar-u-nisa was born in 1903 in Dalhousie, Himachal Pradesh, India. She had two brothers and a sister named Kalsoom Her daughter and my aunt, Saeeda Khanum, told me recently of an incident her mother had narrated – how during the devastating Kangra earthquake of 1905, her family had, in the panic following the tremors, forgotten a baby Fakhar-u-nisa lying on the bed! “I don’t know how I survived”, she recalled.

In 1925, Nisa was married to Ghulam Hussain Khan Qizilbash. She settled in Dalhousie and spent the winter months in Rawalpindi. They had six children together, with my father, Muzammil Hussain Qizilbash being the second youngest. The air was thick with hope of independence and the promise of a new land. Ghulam Hussain and Nisa were so sure that Gurdaspur district – of which Dalhousie was a part – would be carved within the boundaries of Pakistan, that they began the construction of their dream house in the picturesque hill station.

The three-storied house was completed in 1945. Each floor had two bedrooms. It was painted sage in colour, and was quite a sight to look at! But as the family was in Rawalpindi, the house was put on rent with the intention to return the following summer. However, Ghulam Hussain’s health deteriorated and he eventually passed away in October 1946 – a full year before Partition.

Many years later, Nisa expressed to her youngest daughter that at the time of her husband’s passing, “mein ne to kamar bandh li thee”. There was no time to grieve with so much to be done, as the youngest child was barely a year old. One of her brothers advised her to pack her most essential and precious belongings and return to Dalhousie to live in her own house.

A large sandook was pulled out and selections of what to take along to Dalhousie were made. Amongst the most precious was an embroidered bedspread that she had handmade in 1927. She had been pregnant with her first son when her husband brought back a trolley cloth from Calcutta, and requested her to expand the design on a full bedspread.  Proud of her creation, a special bed had been made for displaying it. A paandaan – brass betelnut box, was also thrown in as a daily essential.

But as Nisa was packing for her return to the sage-coloured house in the hills, her cousin, Mushtaaq, came to advise her that moving back wasn’t a safe option anymore as the Partition was now inevitable. They were no longer as sure that Dalhousie would be a part of Pakistan, and the realization broke everyone’s hearts. Around that time, Nisa’s sister in law, Ghulam Fatima, who was herself a widow, moved in to help in the children’s upbringing. Till this day, the image of the betelnutbox that was meant to be carried “home” to Dalhousie, has been engraved into the memories of her two surviving daughters. The Urdu couplet engraved under the lid read:

The only item that Nisa clung to till the final years of her life was the Kashmiri embroidered purse. In few, measured words she had conveyed to me that it was a gift given to her by her late husband. It seemed as if she had held this purse close to her heart in her most difficult times. Its frail condition acted as a testimony to the hardships she had faced. Her warmth seemed to have transferred into the fibers of the purse from holding on to it for 7 long decades.

Since then, it has travelled with me to the United States as I left for higher education, moved with me to New Delhi as I adjusted into my newly married life and eventually found a more permanent home in Dubai. My connection to this object runs deep and strong. I keep it in a box with other family heirlooms surrounded by a nutcracker, a pair of spectacles and an old iron tweezer. My daughters rush over to peer over my shoulder in awe whenever I open this box to feel my dadi’s warmth.