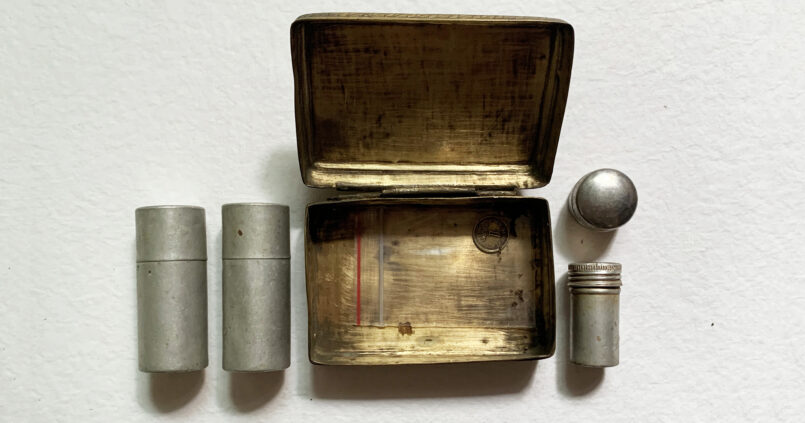 Much like today, even in the 1920s, Bombay was the city of dreams. Like many other people during that time, my paternal grandfather, V. Ramachandran or Tatha, as we called him, moved to Bombay from his hometown of Srirangam, Tiruchirappalli, Tamil Nadu to find work. My father often tells me that Tatha used to admire the work done by local artisans and believed his country had a lot to offer to the world, which also  led to him being involved, to a certain degree, in the Indian freedom struggle. Fully engaged in the movement from Bombay, members of my family remember him partaking in the Salt Satyagraha and other rallies. This deep-rooted love for his motherland and all it had to offer was swiftly passed down to his children as well.

On one of his trips back to Srirangam around the 1930s, he picked up this hand-crafted metal box. I believe it was a rather miscellaneous container, meant to hold anything one would like – odds and ends, maybe even jewellery. But like so many other things, Tatha found a way to make this his own. It is cast in bronze with an intricate design all over, including the sides. The outside has rounded edges so it doesn’t cut or hurt anybody. As the engravings are made by hand, the box feels delicate and full of purpose; the imperfections adding to its charm. There are variations in the pattern, even though it looks uniform from afar. As a designer, I can instantly tell the difference. It would have taken the craftsman a decent amount of time to make it and it would have cost a certain amount as well. Sized at 100mm by 65mm it feels solid when held and fits easily within the palm.

Tatha used this box as a paan box, and furnished it with his requirements. Inside are two repurposed kumkum boxes, and the longer cylinders actually once held camera film reels. Each of these was for a different ingredient. In fact, even after fifty years of it not being used, there are traces of ‘edible chuna’ and ‘katha’ to be found inside the containers. How beautiful is the fact that even the passing of years could not disintegrate the remnants of a daily habit. My father tells me that my grandfather would carry this box with him every single day as he used to consume three or more paans daily, and would source fresh betel leaves from wherever he was in the city at that point. There was a panache to this habit that my father finds difficult to forget even today.

When Tatha passed away in 1969 in a road accident, this box was in his leather bag at KEM Hospital in Bombay. The doctor handed the leather bag to my grandmother and she refused to take it, as she was distraught at the time. It dawned on her then that in the coming years, without her husband by her side, she would have to raise ten children, the youngest being ten years old, all by herself. Standing next to her, my 14 year old father took the leather bag from the doctor; claiming that it felt valuable; it was the last thing my Tatha touched. He has carefully guarded this treasure ever since, keeping it in his wardrobe for the last fifty years. During this time, he has lived in three cities (Bombay, Delhi, Madras) and changed multiple houses over the years. But the one thing that accompanied him everywhere was the sole memory of my Tatha, which is embodied in this paanbox.

Every now and then, my father pulls out the box to run his hands across it. I guess it keeps the connection alive, even after so many years of his father not being around. But I only learnt about this box recently, and despite never having the opportunity to meet my Tatha, it instantly felt familiar. It is through this small piece of material history that I’ve been able to learn more about the man my father often described as highly principled. I have heard that he believed in speaking only the truth. He would prefer walking within the city if he didn’t have money rather than travel ticketless on the bus. He believed being well-read was very important. Education was paramount. He wore only khadi clothes, championing the Swadeshi Movement. And regardless of where he lived, he remained rooted in his South Indian heritage and values.

I recognise a lot of these traits in my father, and see them in myself too. Growing up, I was a rebel child. I wanted to be cool and western and didn’t really consider the importance of where the family was from, and how to be proud of that heritage. But over the years, I have learnt to fall in love with my cultural roots. This paan box brings to life the many things I am forever astounded by within the landscape of diverse craft in our country. I understand the value of handmade things; I’m more touched by the imperfections and details of things that require time and care, and are bound by personal and cultural history.

I am incredibly grateful to have been introduced to my Tatha’s cherished belongings, at a time when I would come to value them the most. Understanding our family history tied in to a larger, national history, and how all of it can be traced back through a little paan box. As a designer, my grandfather’s love for the handmade resounds in my own craft and way of work. And just like that, when you are not looking, life comes to a full circle. And to me that is the beauty of finding yourself.