The hope in black and grey 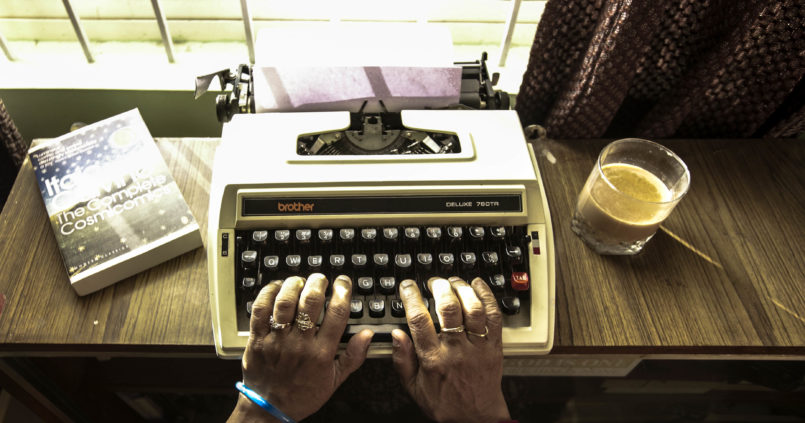 My mother was sixteen when she starred in her first movie as a heroine. It was 1972, and she had only just arrived into the spotlight. A decade she spent expressing every imaginable emotion onto the big screen. She was in no place more comfortable than she was in the heart of the frame. A place where all eyes were on her, where the world kept spinning around her yet she was still the same.

When the world was in the tip of her fingers, it was snatched away by a terrible choice in marriage and an abusive husband who covered her with a blanket of shade. She was forbidden to act from there on. She was forbidden to do anything. Such was the construct of a sturdy emotional cage. She took the violence in her stride, quietly turning her every hope and dream into little solitary screams. She was afraid, constantly afraid. Yet she was trapped in an abusive arrangement. She was a finely tuned violin that was now being plucked apart. 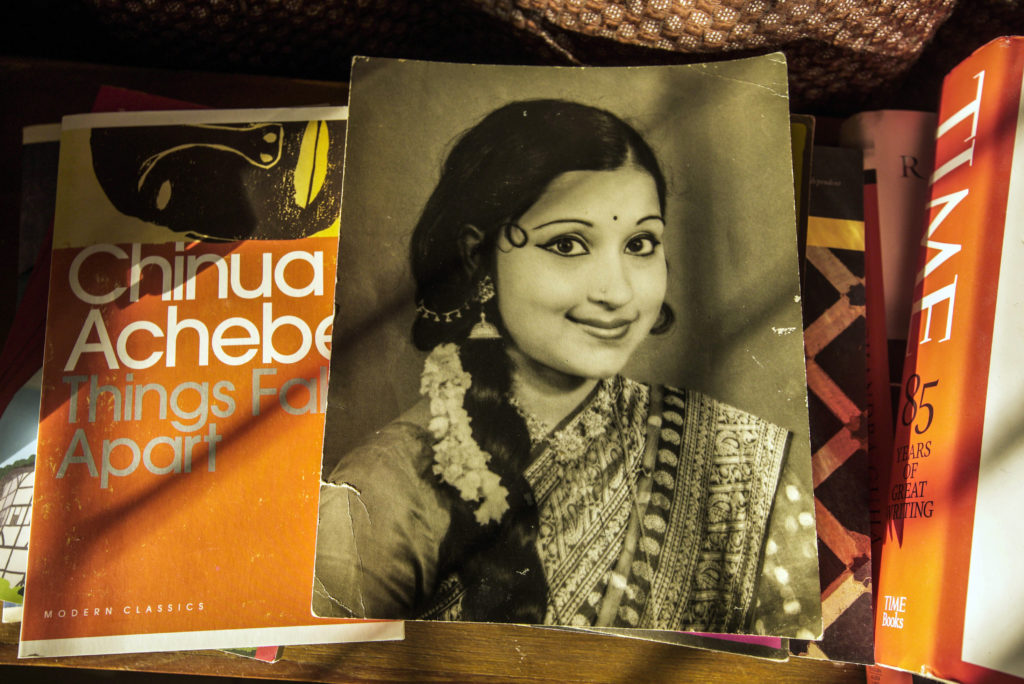 Then one day, a sliver of hope arrived. It was sent in mockery by my father. ‘Since you like to be the centre of attention, maybe you can learn this and become a receptionist in some little hotel.’ he had signed off on that little note. It was an unused typewriter sent from Saudi Arabia to Bangalore. A ‘Brother 760 TR ‘ portable typewriter. She had never felt the need to write anything before, she had never even had the time- she had jumped straight from school to the Poona film Institute. Yet she was enamoured by this little machine.

She waited for my father to step outside and then locked all doors and windows. The moment the noise of his scooter faded into the distance, she bolted to the stack of old newspapers and found her greasy old time machine. Though my father had bought this for her, she knew that it was out of spite and she hid it so that he wouldn’t burst into a rage someday and break this precious little metal contraption of hers. She gingerly opened the cover and pressed those keys with a glee that hadn’t graced her face for years. There had been nothing or so little to look forward to for all these long years. For the first time that day, she suddenly felt she had a reason to get up and rediscover herself. 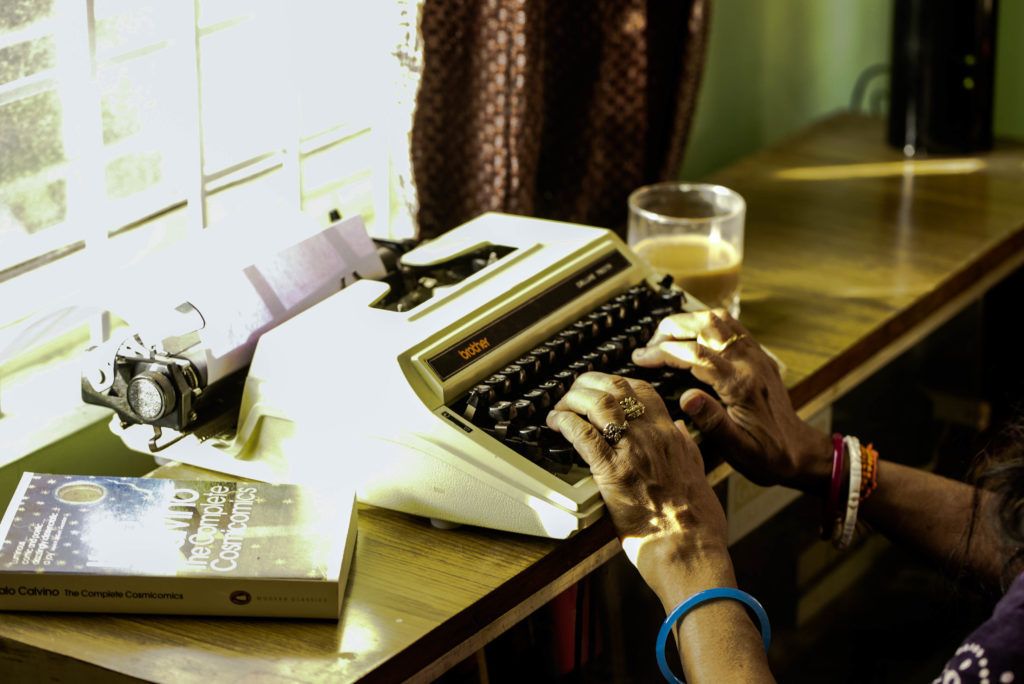 She felt a hope that was cloaked in black and grey. Black when the ribbon of the typewriter was new and grey when it was fading away. The black gave her hope and the grey made her articulate her expression to the finest detail. This fleeting sense of expression would soon become her forever escape.

As the house turned quiet, you could hear her beating away at the typewriter keys like a woodpecker on a hidden tall tree. She learnt as much as she could on her own and started to take classes when my father was travelling abroad. She became a junior typist and then a senior typist in a span of two years. Her life was a living misery but this was her singular window of joy and hope. A place where she rekindled her ambition and imagined a world where she was in the spotlight again. In one of her diary entries she wrote ‘If I got a role now, I would suggest to my director that my character knew how to type. I could maybe write a letter to my lover. Maybe I could write a song. Who knows. The possibilities are endless.’ Yet in real life, her dream of possibilities could not survive in her brittle mind. As the silence grew and the dark only got darker, she found that her newfound river of joy too was fading away.

One fine day, she packed up the typewriter in a box and put it up on the uppermost shelf. Her situation was now dire. There is no room for joy when you are trying only to survive. Years later, my father was in terrible health, I was turning into an adult, our voices were finally rising against his violence and we all felt the plastic bag slowly lift over us so we could breathe again.

My mother had to now make a living to support us. I remember accompanying her to office blocks for her interviews to become a receptionist. ‘You are an actress, maybe you should try acting.’ one of them said as they rejected her for a lack of experience. Her two little certificates of typewriting qualification had turned yellow after all these years, seemingly weightless. It took her a while but she concentrated on those very words of rejection and found her way into the big screen after 20 long years. She wasn’t in the spotlight anymore and not many people remembered her; she was a blur in the background but she didn’t really care.

A few years passed and I found the typewriter in a dusty corner of my room. I was an aspiring writer by now and I was trying my best to invoke the gods of writing by following their every ritual. I dusted off the typewriter and started to type on its QWERTY Keyboard with the same authority that I found myself having in front of a computer screen.

As the tick and tock of my typewriter echoed through the house. I heard my mom immediately rush towards me and told me to get off the chair and took my place in an instant. She looked at me sternly, a look that rarely came my way. She said, “That is not how you type. You put the paper in gently, find your alignment and hit each key firmly but not hard.” I had seen my mother go through a million emotions and back, but I don’t think I had ever seen her this confident. She wasn’t even this sure as the camera rolled and cut immortal frames of her and more. I quietly nodded, took the seat again and started typing my sentence. To my surprise, I was cut off with a “No! You haven’t earned a full sentence. You need to only type the alphabets till you deserve that honour.” So I spent days after that typing a series of ‘A’s followed by a series of ‘B’s and so on.

Today, my mother is sixty. She doesn’t really have the time to write amid all of her song and dance in the movies. Yet when she’s home and I am writing on the typewriter, I hear her lower the volume of her music player in the distance. I know she’s listening to me through the thin walls that separate our rooms. Listening to correct any mistake that I might be making. Listening to the sound of what was once her every hope when there appeared to be none at all. 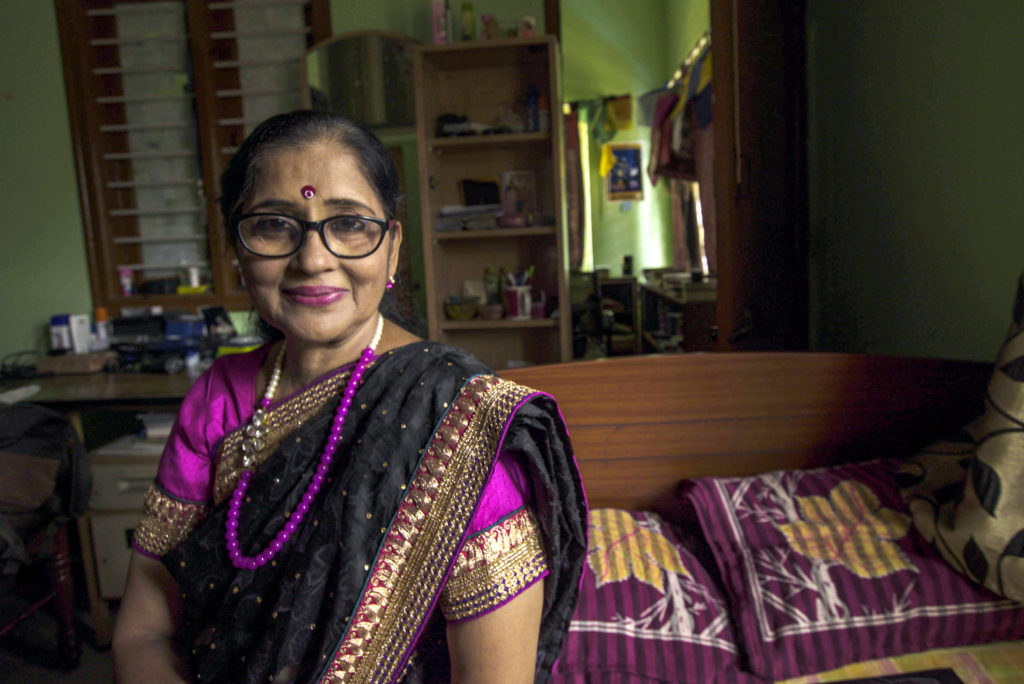