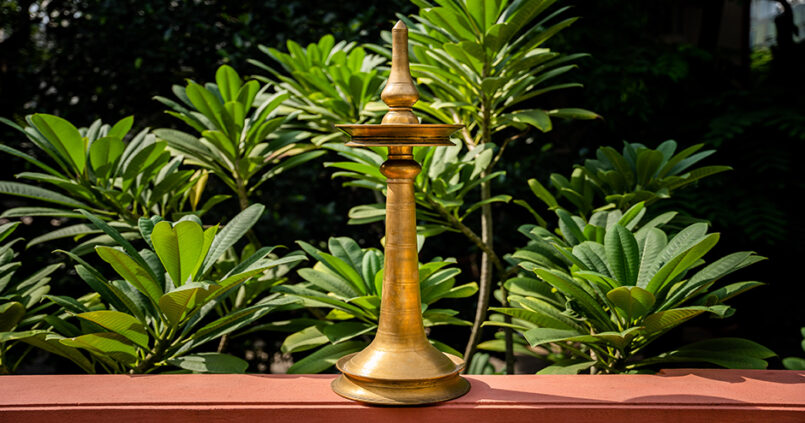 Pradeep Chakravarthi leads us up to his terrace that is nestled in a thicket of mango and jackfruit trees. On a sunny, brisk morning we eagerly wait to see what he produces from his storeroom of carefully maintained heirlooms. From between the colonial era furniture and stacks of photo albums, emerges a 2’6” tall bronze lamp. After a gentle dusting, we can admire the soft luminescence under the morning Madras rays. The lamp is in a typical design of a 12 inches wide circular base that tapers in and out again into a rim. From there, the thick stem of the lamp meets the circular oil container that matches the width of the base and the top of the lamp ends in an elongated bulb.

The lamp is modest compared to its ornamental counterparts that are embellished with sculpted birds and five- or six-stared oil containers. But there is a captivating elegance and ease about the simplicity of the design; the smooth, undisturbed surface of the cool, heavy brass and the concentric circles that are intermittently etched along the body of the lamp. The nilavilakku, as it is commonly called in Kerala, or the vazhaipoo vilakku as it is known in Tamil, is common to both states. Nilam, meaning floor, is in reference to the floor-standing lamp while vazhaipoo likens the top of the lamp to the banana flower. The exact date and origin of Pradeep’s vilakku is unknown, but it can be traced back to beyond the 1930s in Madurai. It belonged to his paternal grandmother, Rangammal Raghavan, who might have even inherited it from her father. She bought and passed down lamps to each of her six children, including Pradeep’s father, S Chakravarthy.

Most of Pradeep’s memories associated with the nilavilakku surround the festival of Karthigai Deepam — the auspicious festival of lights celebrated in the South after Deepavali. Growing up, Pradeep observed the technical steps of setting up the lamp for the festival from his mother, Nirmala. Dressed in her fine 9 yards wedding sari called the Korai podavai, she would handle the messy process with focused patience and care. The five wicks must be laid precisely, all clockwise in harmony with the rotational pattern of the earth, around the circular oil holder — one each for the four directions and one towards heaven. The slight downward slope of the oil container was engineered in such a way that the angle at which the wick met the oil was perfectly optimised. Even with a little bit of oil, the nilavilakku would remain alight, from 6pm to 6am, with a steady flame. The rim was designed in a way that there was very little soot in the lamp as the wick burned. For generations now, the nearly 100-year-old lamp is reliably brought out every year and placed in the pooja room or in the hall with an intricate kolam drawn on the floor in front of it, adorned with flowers, and decorated with manjal and kumkum. The result is a beautiful celestial scene of twinkling lights against the gleaming bronze tones of the vilakku.

Just as Pradeep helped his mother in the preparations for Karthigai Deepam, whenever the lamp is brought out for its annual festivities, his son now assists him; ushering in light, joy and prosperity, and passing on an heirloom in the form of tradition. In this way the next generation learns how to sollow a process with care and patience and recognise the philosophic significance of the advantages of lighting a lamp rather than cursing the darkness. Pradeep’s name has a lamp (deep) in it and his mother would often remind him to live into the meaning of his name of spreading wisdom and light to those around him when he grew up. Those words of advice given during Karthigai as the lamp was lit proved to be an inspiration for him even after he lost his mother at a young age. The lamp, her words, the festival being celebrated together with the meaning told to him continue to inspire him.

This object is from a home in Madras. It’s part of a series in collaboration With Love, Madras, an upcoming book that explores the city through its homes. Follow @withlovemadras to know more about Madras’ rich history, its charming characters, and the beautiful spaces within its homes.