The tale of a travelling lehenga 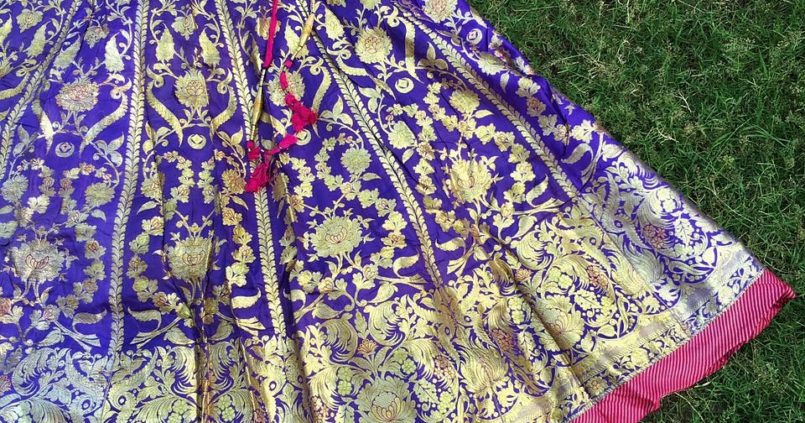 This lehenga was given to my paternal grandmother as part of her wedding trousseau in 1930 and dates back to that time, most likely having been made in Varanasi. It accompanied her when she got married and moved to Ajmer, Rajasthan from her natal home in Indore. She would wear it on special occasions such as family weddings. Many decades later, she presented this lehenga to my mother, who then brought it to her home city, Jodhpur.

The lehenga is fashioned from silk and real gold-polished silver zari. The silk is a deep purple while the intricate embroidery is of a gold-hue; the lining is of cotton and the hems are fuschia-hued. It has been slightly altered only for its length; otherwise, its proportions, design, and pleats remain as it was originally made. The diameter of the lehenga is over 3.5 metres. Apart from the surface designs, there is no other stain or wear and tear. It is in pristine condition, and as you unwrap and examine the garment, it would be hard to believe that it is over a century old. But yes, while the fabric and the lining are still intact, the metallic hues have somewhat undergone a change, the sheen diminished in some places.

My grandmother used to store it in wrapped in a malmal (fine cotton fabric that is heavier than muslin) dupatta in an enormous wooden majoos, cabinet-box, in a dressing room in our ancestral haveli in Ajmer. My mother carefully keeps the lehenga wrapped in an old muslin dupatta (scarf) and stores it in her cupboard in her maternal home in Jodhpur alongside her other older sarees and garments. It smells of the inside of cupboards and boxes and I like to think of it as the smell of her story: of whispered feminine confidences, shringaar, tinkling jewellery, and speaking fabric.

I remember being in utter thrall when my mother unwrapped the lehenga from its muslin envelope and laid it out on the bed in my maternal grandmother’s room in Jodhpur many years ago. The extraordinary intricacy of the patterns, the depth of the purple, and the fact that its sheen and quality have remained undiminished over time made it seem as much as of the present as of the yesterday. Given my deep love and interest for personal family history and textile heritage, this lehenga represents a spectacular confluence of the two. I also recall seeing a photograph of my mother wearing the lehenga along with a bright saffron odhna (scarf).

I have been privileged to have worn it on at least two occasions and hope to do so once again in the future. I last wore it about a decade ago and honestly speaking, I am not sure if I fully grasped then the enormous significance of wearing something that represented the exquisite craftsmanship of a bygone era and which had journeyed across India to be worn in multiple contexts and by different generations of women: my grandmother, mother, and myself. Yet, it has always remained in my mind, even serving as the inspiration for a short story I wrote about a haunted lehenga!

However, this lehenga is laden with so many layers that I can only wonder what stories will emerge once I begin to unravel their threads. I imagine it being painstakingly made in an atelier in Banaras. I see it being transported to Indore. I imagine it being packed along with other precious items for a new bride’s journey in a distant, unfamiliar land. I think of the years it spent lying in an enormous wooden box in a haveli before making the journey to yet another city and sharing space alongside garments belonging to another life and era. And I wonder what journeys it will witness in the future.