The vanity set from my mother’s trousseau 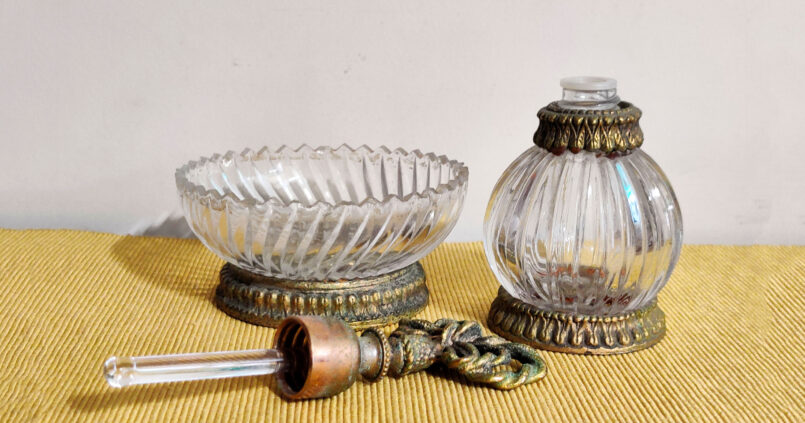 Since childhood, I’ve been extremely fascinated by any old objects or photographs lying around the house. Things that other family members would disregard as rusty or outdated, I would curiously inspect. A few months ago, a twenty year old me was hurriedly searching for some cosmetics in my mother’s drawer, when I came across this beautiful perfume bottle, a traditional ‘ittardan’. I was surprised at how in all these years I had never seen it before and why it wasn’t in use anymore. In order to find out I started questioning my mother incessantly.

The form is extremely dainty – a spherical crystal-like glass body, with indentations at regular intervals. The top and bottom is made up of metal, maybe copper or bronze, and seems to be gold plated. It is highly ornamental with intricate carvings and a twisted rope bow on the top, used as a cap, to screw and unscrew the glass applicator stick. The ittardan is in fact, quite modern and resembles a perfume flacon. It measures 5” in length, and the width at its base is 2”. The bottle opens by softly rotating the metallic top in an anticlockwise direction. Over the years, the metal has developed a layer of patina and the glass body has bear marks of wear, but it remains elegant, nonetheless.

The fragile bottle had been buried among miscellaneous objects for far too long and seemed neglected. It took my mother a while to recall where she had gotten it. In 1996, one year before my mother, Preeti Kanoi, got married, her family took what was perhaps their first international trip to Hong Kong. That was where my nani, my maternal grandmother, had bought a four-piece dressing table set, which would form a part of my mother’s wedding trousseau. The marriage took place in early 1997 in Calcutta; it was a traditional Marwari wedding ceremony. As was customary, the couple received several gifts from friends and family. Among these, my mother also received a set of ittars, the remnants of which showed me only last year. It might have been one these ittars that she had once store in her prized ittardan.

In those days, the vanity table was a prominent part of the bedroom, and women would be particular to adorn it beautifully with various objects of their choice. This set of four included an oval-shaped mirrored tray, a powderbox, a photo frame and the ittardan, all made by an American brand called ‘Stylebuilt’, which rose to popularity first in the 60’s, with its signature metallic gilding. My mother recalls how she used each of these items on her dressing table for several years.

I immediately knew that the next thing I had to do was locate the other three pieces to complete the set. With some effort, my mother and I found the tray and the powder box in different drawers of the house. Funnily, the photo frame had been on display in my living room for over six years, but I was unaware that it belonged to any set. The oval tray measures 13” in length and has an ornamental rose and vine gold-plated border all around. The mirror is in fragile condition with a few marks and scratches. The photo frame is also oval shaped and measures 5” in length and approximately 3.5” in width. It has the same rose carving on top and bottom, as the tray; and a black velvet back. The powder box now looks like a simple glass bowl, since the ornamental top broke a few years ago. It has similar indentations as the ittardan and rests on a carved metallic bottom that is now dismantled from its glass structure. It measures 3.5” in diameter. It is interesting to note that the gold on all pieces has worn out in its own way, and while in some places one would see a greenish growth, in other places there is a dark brownish sheen.

Seeing the ittardan along with the entire set after so long had brought back many memories of the days gone by. My mother recalled how the gold was spotless and shiny and looked quite regal. It stirred up conversations between us and she narrated stories from the early days of marriage. The set had been in use for some years, after which she chose to display other things from her trousseau on the vanity-top. When we moved to a new house, the trend of having a dressing table was not as prominent as before. With no suitable space to display this beautiful set together, it got divided into various rooms or stored away in drawers.

While the powder box broke during the shifting process, the ittardan became outdated in comparison to the chic perfume atomizer bottles. The mirrored tray was used on the side table before the mirror came loose. The photo frame has remained in use with a picture of lord Ganesha in our living room. Eventually, these objects got buried in time, as were the memories attached to them. The comforting thing about objects, however, is that each time you find them in some corner of your house, every small memory comes rushing back. Now that these objects have been found again, I am sure that I will keep them as treasured as they once were.