Tunes of an untuned radio 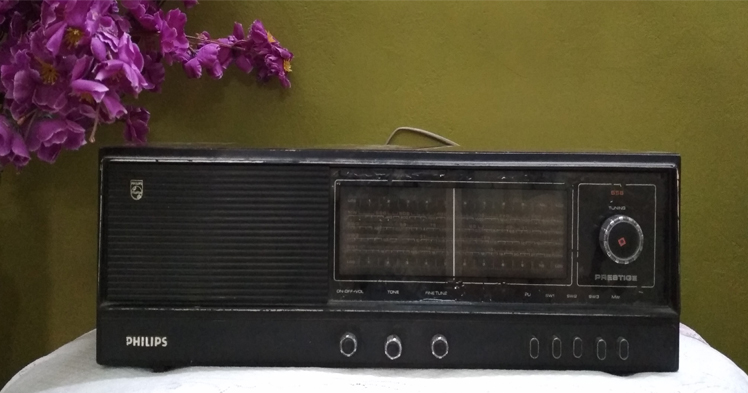 In 1978, two years after my great-grandfather’s demise, this Philips radio, type RB 556/02S was bought at the price of 1000 rupees by my grandfather, Mukut Yadav. It replaced a black tape-recorder he had, until his friend; who also owned an electronics shop in Kishangarh, convinced him to buy a radio. My grandfather saved for months from his already meagre income, without my grandmother’s knowledge and bought the radio to her surprise.

“Ankur Electronics”, he remembers the name of the shop with a smile. The shop soon shut down and a pharmaceutical store now stands in its place.

This radio now, sits amidst the dust in what our household calls a bukhari, which translates to a small storage space located right under the ceiling or sometimes – underground; paid attention only during the Diwali cleaning spree. I have lost count of the number of Diwalis I have seen this radio being taken out of the bukhari, dusted and offered back in the care of spider webs.

Every year before the festival, I climb up to clean the bukhari and I see this radio; and like every other year, I carefully hold it while gasping in fear of falling lizards and spiders. And then, I know the drill—dust it, wipe it, and finally plug it in. My mother laughs at this unannounced ritual which has formed over the years. What follows next is a very risky terrain of potholes filled with hope and hopelessness. A frail hope – yet a hope, that this year unlike others, it will start tuning. On the other hand, a hopelessness which whispers the condition of radio in negative but harbours you to the hope, oiling your expectations. I pack it carefully with optimism and love, wishing that the dust and spider webs play their magic on the radio which is now nothing more than a brown rectangle wooden box. Each year, I see the faded model number – fading, weak wires – weakening, and scratches – increasing here and there. Yet, it is brand new every year.

My grandfather fondly remembers the day he bought it in the house. Teasing my grandmother who stands beside him under the veil, he says, “I did not tune it even once. It was your dadi who used to listen to Dilip and Rajendra Kumar’s songs all day long.”  She smirks and dismisses it as a lie.

I speak to her later that day, while she stitches fall to her sari – which even at this age with poor eyesight, she does with her own hands – away from the clumsiness of tailors’ sewing machines. While neatly running thread along the fabric, she knits stories to my heart about coming to this house as a child bride, toiling through the household chores and humming songs of the then-super hit movies, Pakeezah, Chupke Chupke and Noorie to name a few. Every month, she went to watch cinema with her sisters in Ajmer, an adjoining city to where we live and later discussed the movie at lengths for a week.

My grandparents still fight over the corner in which the radio was kept in our old house. My grandfather says it was the taaq (a shelf built into the wall) while my grandmother believes it was outside the kitchen. I continuously asked him why he bought the radio worth so much money if he himself never listened to it. He smiled and turned his head away to feed dry chapatis to the stray dogs. My grandmother has a weakness for cinema and music. She now listens to FM every morning, starting with bhajans, followed by afternoons fading into balmy 90s nostalgia.

“Don’t you feel like listening to songs on the radio?”, I ask her. She adjusts her veil saying, “Hmm. We should get it repaired next year” and falls silent. Even our hearts know that there’ll be no tunes playing on that radio, not next year and not the year after that.