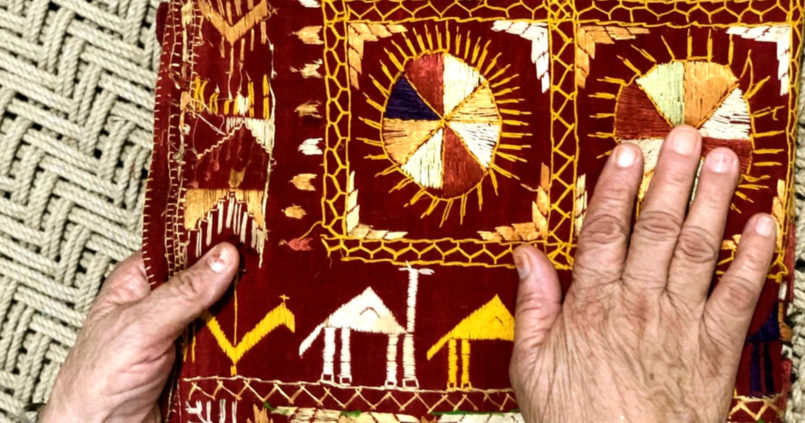 My dadi, Sardarni Manjeet Kaur would often share stories from her childhood, in particular focusing on the relationship she shared with her mother. Jangir kaur, bebe ,was born in 1930’s in a village called Ablu Kotli, Tehsil Gidderbaha in the Muktsar district of Punjab. She was the daughter of Sardar Prem Singh Sidhu and had four other siblings. Bebe was only 14 years old when she was married into the Bhullar family and had six children of which my grandmother, was the oldest.

According to dadi, bebe would always be busy with household chores. And when she was free of her duties, she’d busy herself with weaving, making rugs, shawls and bedrolls and doing hand embroidery on phulkari dupattas and stitching baaghs for ceremonial purposes. Bebe’s daily attire consisted of printed collared kurtis, white salwars with 5′ inch open paunchas, complete with a pair of juttis, her hair braided with a paranda and saggi on her forehead. Bebe’s family were farmers and the women also worked in the field to pick cotton.’Her wedding procession came on camels’, dadi would tell me. Never having heard or seen such rituals nor having met bebeji, I became fascinated with these tales especially when told that our personalities were similar.

During those times, weaving and embroidery were considered very important skills for women to know. All the women of the pind (village) would sit together in a group, where they’d spend hours weaving, exchanging gossip and laughter. The story of this ‘vari da bagh‘ begins with bebeji. It was hand-embroidered in around 1965 and given to my dadi as part of her wedding trousseau. The ‘vari da bagh’ literally means garden of the wedding trousseau and is made of hand-dyed and hand-woven cloth called ‘khaddar‘ using high quality untwisted silk threads called ‘pat‘ that come from Kashmir. The bagh is embroidered heavily in a darn stitch using an ordinary needle without any tracing, drawing or patterns. At those times, baghs with flowers made using cluster stitch was mostly worn by women belonging to a higher socio-economic class.

The khaddar cloth is usually in one of the four colours of white, red, blue or black and each colour represents something unique. This one is red which is usually for young brides. It is 2.5 metres in length and around 1.5 metres wide. My dadi told me that when this bagh was embroidered for her the women sang ‘suhag‘ songs that depicted the future life of the bride and offered her good wishes. It is quite unique because of the motifs that bebe has stitched. While most baghs have geometric prints, this one has peacocks, human stick figures and even jewellery as motifs. Jewellery articles including kangans (bangles), karanphool jhumkas (earrings) gulubands (bracelets) are embroidered in yellow thread to show that they are made of gold. Bebe has also shown different types of peacocks, a still one and a dancing one with its wings spread. A row of human figurines form the motif border.

The last time dadi wore this was at my dad’s wedding during the the ‘jaggo‘ ceremony. Traditionally, the jaggo ceremony would happen at night with much fanfare to alert the village about the upcoming wedding. It literally translates to ‘wake-up’ and is accompanied with customary singing and dancing. Family members of the bride and groom will dance carrying earthen pots decorated with oil candles. The women of the family, especially the mothers of the bride and groom wear traditional baghs to be identified as the mother of the bride or groom. Some time back, while looking through my parents wedding album, I found photos of dadi wearing this bagh. I had heard about it before but on seeing the photograph, immediately asked to see it. Dadi took it out of an old trunk and it was wrapped in a mulmul (muslin) cloth. Along with the odour of the trunk from years gone by, I could smell bebe’s love on it as well. Given its pristine condition, its hard to believe that it is so old. Not a single piece of thread is out of its place.

My dadi died of a heart attack in February 2022 and while organising her belongings, I found the bagh again. It now sits with layers of tissues in its folds in a cupboard in my village, Lakhewali in Muktsar, Punjab. The extraordinary intricacy of the design, the fine thread work on such a thick cloth and the ever so shiny thread bridges the lives of three generations of my family- a great-grandmother, a grandmother and me, a granddaughter.