A Window into the World: Krishna Mitra’s Doll Cabinet 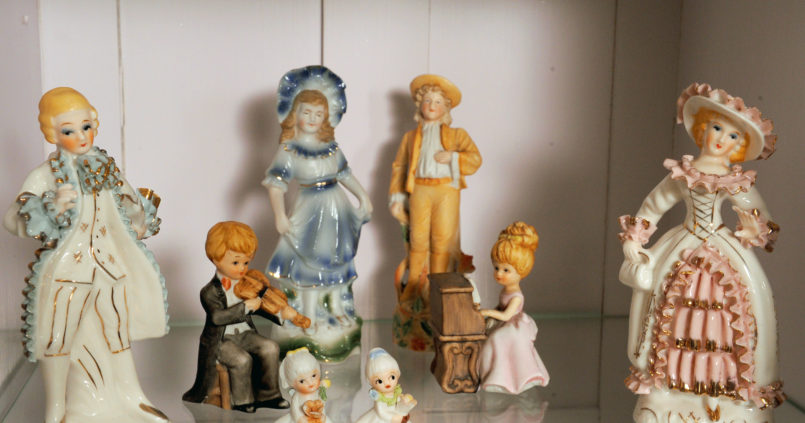 
In the spring of 1957, my grandmother, Krishna Mitra, then a nineteen year old bride, walked into her husband’s home in south Calcutta with hopes, dreams and a wooden showcase to house dolls. She journeyed from her paternal home- in an old neighbourhood in the older part of the city- to her husband’s art deco style house with its trellised windows and gravel path. And along with her wedding trousseau went the showcase, a present from her father.

In those days, it was customary to include a cabinet for dolls in a bride’s wedding presents; this was at a time when most brides were no more than ten or twelve years old. The doll’s showcase possibly travelled with many child brides, across paddy fields and city by lanes, keeping pace with palanquins and jostling on boats across Bengal’s wide rivers. For these child brides, the doll’s showcase served as an antidote to homesickness, as a pacifier to deal with the pangs of separation at a tender age. In a strange new life, it was a vestige of the familiar and the known, a reminder of a home so far away. And though my grandmother was no child bride, custom demanded that a doll’s showcase follow her to her affinal home. Complete with a set of miniature silver utensils- the wooden showcase found pride of place in one corner of the marble floored drawing room in her new house. But my grandmother dreamt beyond the roles of domesticity that the young owner of such a showcase was generally relegated to. She wanted to fill this wooden cabinet, with its glass paned doors and rounded patterns, with dolls from across the world. And that’s just how it came to be.

The showcase originally only came with a three-piece set of porcelain dolls: individual statues of Romeo and Juliet, and a clock with the two lovers from Verona engraved on its two sides. Inherited by my grandmother from her own mother, this hundred year old set is no longer complete: my great-grandfather broke the clock by accident sometime in the 60s. But Romeo and Juliet stand, their slender porcelain bodies poised gracefully, enduring one decade after the next, united forever in my grandmother’s glass doored showcase.

The next few additions to the showcase came from unexpected sources. In the 1970s, steel utensils were the rage among the ladies of Calcutta- lighter and more convenient alternative to silver and brass. Easy to wash and easy to store, these steel utensils were bought from women vendors who went from house to house in the afternoon sun, calling out their wares in hoarse tones. The ladies of the house would hurry down to the courtyards, inspecting the steel plates and marvelling at their lightness. A bargain would be settled on. Steel containers were bought, in exchange for porcelain dolls and statues from the old Calcutta houses. Antique figurines, created by master craftsmen and shipped from Europe, would incongruously find their way to the straw baskets of these utensil sellers.

My grandmother however, lay on the other side of this transaction- frequently buying the porcelain dolls that were discarded by Calcutta’s old houses, in exchange for a few aluminium plates. From the baskets of the utensil women, these porcelain statues came to inhabit my grandmother’s doll showcase. Cinderella with a pink frilled gown and Prince Charming. Tiny statues of children playing the piano. Two nuns from a convent in France, their white robes lined ever so slightly with blue. A group of three forest nymphs occupied a lower shelf, their olive dresses and silken hair stitched on later by my mother’s aunt, to provide a degree of modesty.

And that is how it went on. Whenever a relative or friend was slated to travel abroad, my grandmother would request for a doll from the country he was headed to. In pre-liberalised India, at a time when people asked for foreign lipsticks and perfume and watches and duty-free Scotch, my grandmother asked for dolls from abroad to add to her collection, a request that left most amused and which none would refuse. Her enthusiasm was infectious and soon relatives and friends took it upon themselves to add to her collection. Soon the shelves of the cupboard came to be occupied by certain undersized ambassadors from around the world. Within the glass panes of the cupboard, they created a world of their own, so different from the one outside. With no memory of past conflict and no instinct for future hostility, the dolls from across the world, shared space amicably, blissfully unaware of the frictions their countries were struggling with in the real world.

A family friend posted in Tehran brought a doll with jet black hair and a layered gown, a coin sticking out of her turban. Next to her stood tiny ‘Peevie”, a brown fringe masking her brows and a cheeky grin on her lips, her sundress reminiscent of a Florida summer. On a lower shelf a Buckingham Palace guard, complete with the black and red regalia, stood at attention next to a bare chested Roman gladiator wielding a shield.

It was a labour of love. Every two months, the showcase would be unlocked and its inhabitants would be taken out. The shelves would be dusted and the porcelain dolls would be washed in large tubs of soap water. My grandmother would sit on the floor- her arms covered in soap suds till the elbows, washing each doll and recounting the tale of its discovery to her two daughters- my mother and my aunt. Some from utensil women, others from kind relatives who went abroad and yet some more through inheritance- my grandmother’s collection of dolls came to represent a veritable preserve of art, heritage and above all, memory.

In 1987, three decades after she walked into her husband’s home with a doll’s showcase, my grandmother had the opportunity of going to Disney World, on a trip to the US. Later, she would write to my mother about having gone on the “It’s A Small World” ride which features dolls from different countries dancing and singing in the spirit of global peace. “It brought tears to my eyes”, she wrote, her hand writing slightly shaky in parts: her meningitis was starting to set in.

My grandmother, Krishna Mitra, passed away two years later, at the age of 51. I was never to meet her. I came to know her only through stories related by my mother before afternoon naps, and anecdotes at family gatherings. And her legacy continued to live on: our relatives and friends continue to bring a doll or two to add to the showcase on their return from a foreign land as a tribute to her, half expecting my grandmother to step out of one of the rooms and clap her hands with childlike excitement. A pair of rosy cheeked Belgian dolls was added by my mother’s school friend some years back, their long lashed eyes closing at certain angles.

My mother continues the tradition of periodically cleaning out the shelves and soaping the porcelain dolls and dusting the panels. My sister and I sit around her, listening to the tales surrounding this doll and that. And every time, we glimpse a little more of the grandmother we could never meet.