Woven khadi from a wedding trousseau 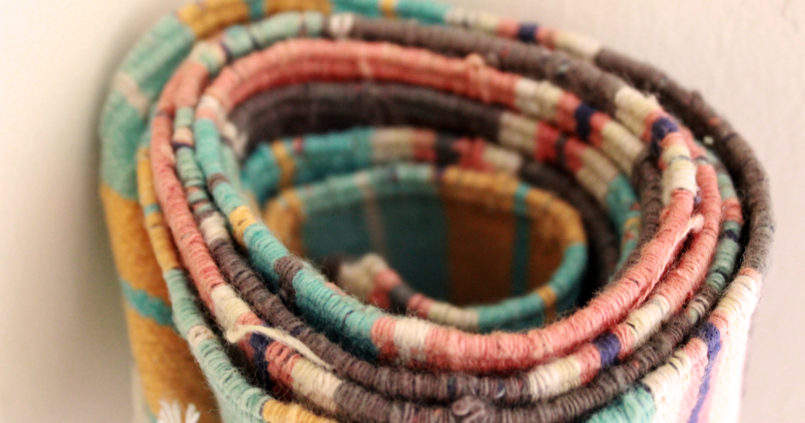 I never had a chance to know my nana ji, grandfather, Havaldar Bajrang Singh Manhas. And the little that I do know of him is through my mother’s stories. She speaks fondly of him like any other daughter would, and quickly gets lost in a world from a past that belongs only to her parents and her. From what I’ve gathered, my grandfather was an Havaldar in the British Indian Army. He hailed from Sialkot, which is now in Pakistan and was in military service for a total thirty-five years, including his time in World War II, first in the Signal Corps and then in Griff. Later he joined the Border Roads Organization, and it was during his time there that the famous ‘Jalebi Road’- which curves and loops like the concentric circles of a jalebi- in Leh was constructed. But no matter what his post or office, like the ideal military man, he lived the values that had been ingrained in him during the course of his service. A life of particularity and punctuality, one of order and routine. And whether it was homes or belongings, everything was given great care and affection, these habits passing down to his children as well.

When my grandfather passed away on May 7, 1988, my mother, Anu – ‘guddi’, as her parents lovingly called her- had already been married for four years. As a part of her wedding trousseau, her father had provided her with everything he could think of that might make life in her new home comfortable and familiar. She received rugs, bedroom furniture, and even smaller household items like utensils and a radio. After her father’s death, all his gifts from her marriage became a direct link to him, her escape to her past.

These items were all stored in trunks, safe from wear and whether, and there was one particular trunk which my mother opened whenever we insisted upon it. In it, were old clothes – saris, suits shawls – all the things from her trousseau that were precious to her. It also contained these old soap bars, which made the entire trunk smell like sandalwood and rose. And because of this, for the longest times, these were the fragrances I associated with the past.

Apart from that one trunk, no others were opened. Though I’d be seeing them since I was 15 years old, it was only a few months back that another one was opened in front of me. It contained so many items that I had never seen before. My sister and I went through them with bated breath and anticipation because we never knew what treasure we might unearth. That day, I came across two gorgeous khadi durries- rugs- that I had never seen before. Six feet in length and three feet in width, they are multi-coloured with horizontal lines spread across their expanse. Though my mother doesn’t know exactly where these durries were bought, she suspects that they were likely woven by the local villagers of Hoshiarpur, where the family lived before my mother was married and moved to Kangra. Among other places in India, the Hoshiarpur region is famous for Panja weaving, flat durries made from dyed cotton yarn, which is what these most likely are. The craft gets its name from a metallic claw-like tool called panja in the local dialect, used to beat and set the threads in the warp. 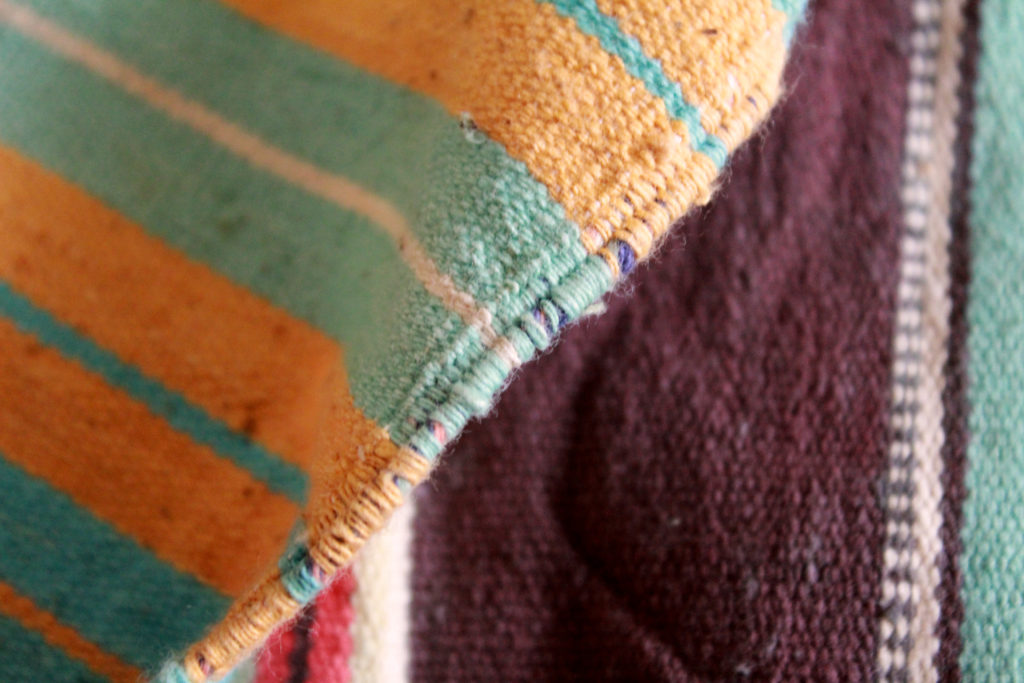 I remember removing the durries from the trunk and laying them out. I couldn’t help myself from asking my mother if I could take one to decorate my new house. Of the two, the rug I took is almost 37 years old and was a gift from my grandfather, though my mother had never used it, for fear of ruining it. The tapestry is colourful – brown, sky-blue, red, mustard, some dark blue and off-white even – in some ways, it looks almost like a landscape from a time gone by. In the very centre of the rug, there are two lines in chevron pattern, running width-wise. Both edges end in fringes, some thick and some thin, varying in width, which is likely a sign of the handmade.

When we first found them, I had no idea about the rug’s rich history, about the fact that they were gifts at such an important moment in my mother’s life. I just fell in love with the bright colours and I knew, from the moment I laid my eyes on them, that these would adorn my home. It was only when my mother began talking about them, caressing the rug’s threads, grazing her hands across the woven tapestry, that I realized that an object could mean so much to a person. I never knew before that day that our belongings could become our escape in reliving moments with people who are no longer around. The more my mother spoke about the relationship she shared with her parents – the rug acting almost like a mundane portal into her memories- the more my heart ached to witness this longing. Unlocking the old trunks had made her also unlock things that have remained latent for years.

At the end, these rugs might just be fabric woven together, but I want to preserve them as best I can, pass it on to my children and maybe one day, narrate all the stories that my mom once did to me. I want my children to know where they came from, to know their ancestors, to have physical traces of them. I can only hope that these objects become their refuge, as they had been for my mother and for me.