A lineage of Military Service 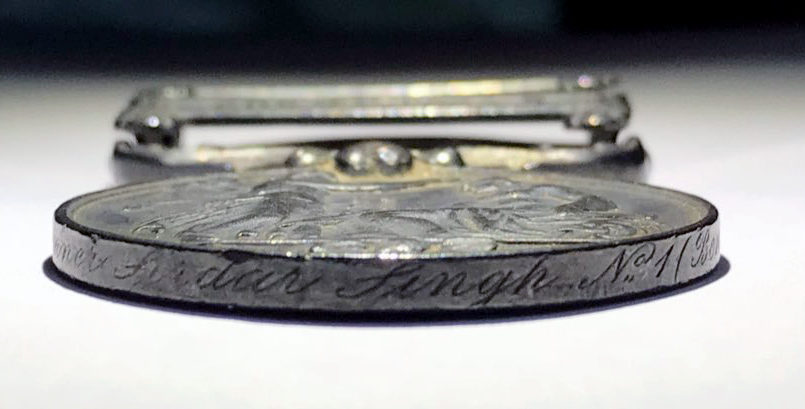 1. He served in the Burma Campaigns from 1885-87 (in the Third Anglo-Burmese War) and 1887-89 (Burma was annexed by British-Indian troops in 1886, which was followed by clear-up operation during the aftermath of the War).

2. He served in the Zhob Valley, North West Frontier of India (present day Pakistan) in 1890 (An expedition which took place under the leadership of Commander George Stuart White. It was a part of the North West Frontier Campaigns. Here the British and Indian troops fought Pakhtun tribesmen who adopted an hostile attitude towards them).

3. And lastly, he served in Tibet from 1903-04 (A British Expedition to annex Tibet, it was effectively a temporary invasion by the British Indian Forces under auspices of the Tibet Frontier Commission, whose purported mission was to establish diplomatic relations and resolve the dispute over the border between Tibet and Sikkim. In the nineteenth century, the British conquered Burma and Sikkim, occupying the whole southern flank of Tibet. The expedition was intended to counter Russia’s perceived ambitions to advance into Central Asia, and fear of Russian invasion of British India. The expedition reached Lhasa the capital of city of Tibet also home to then Dalai Lama. That is the reason why reverse of the medal depicts Potala Place, which was home to Dalai Lama)

The details of the medals he earned on these campaigns are as follows:

A lineage of military service is in my genes, for my grandfather, Amar Singh, too, was in the Army, serving in WW2. These medals were part of the belongings that were bequeathed to my father, Major Singh after his death. Since they had been retrieved from his belongings, we were certain they were his, but upon closer inspection of the medals, service records and badges, I found out the Burma and Tibet medal belonged to my great grandfather Sardar Singh.

Researching on such topics can be quite an exhaustive process, till you find some interesting details. My father remembered only a few things, since he had not seen Sardar Singh in person. But my father’s elder sister revealed to me that my great grandfather had retired as a subedar from the army and settled down in village Khanna Khurd near Ludhiana in Punjab. He had six children, my grandfather being the third. After retirement, he mainly focused on farming and was known as a Lambardar of the village, an elderly who advises people on several issues. It was my grandparents who looked after him and it is possible that my grandmother must have kept his medals safely along with the records of my grandfather. This is one reason why they were found together.

My grandfather, Sepoy Amar Singh, was inducted into the 1st Punjab Regiment on 1st November 1940, a regiment of the British Indian Army from 1922-1947. It was transferred to the Pakistan Army on independence in 1947, and later amalgamated with the 14th, 15th and 16th Punjab Regiments in 1956, to form the Punjab Regiment of Pakistan. Amar Singh was born in village Khanna Khurd, Punjab, but travelled across several places during World War 2. In 1941, he was posted in Middle East where he participated in Anglo-Iraq war, later in 1942 he served in Africa moving on to Burma, Singapore and Indonesia and returning to India through Vizagapatam.

Details of his medals are mentioned below:

For many, medals and other service memorabilia might just be pieces of metal and cloth till the time one realizes the history and the struggle that is undertaken to earn them. The courage and sacrifice of my ancestors is embedded within these medals; each disk, each ribbon is laced with their ambition and dedication. I was very fortunate enough to meet several military historians and WW2 researchers, who shared their tremendous research with me, and thus helped me locate details of my ancestor’s regimental history and the role they played during one of the darkest phase of World Wars. Today, I feel extremely proud of their services and the contribution they have made for the nation. It is an honour and also my responsibility to preserve these pieces of history which unfortunately many have forgotten.