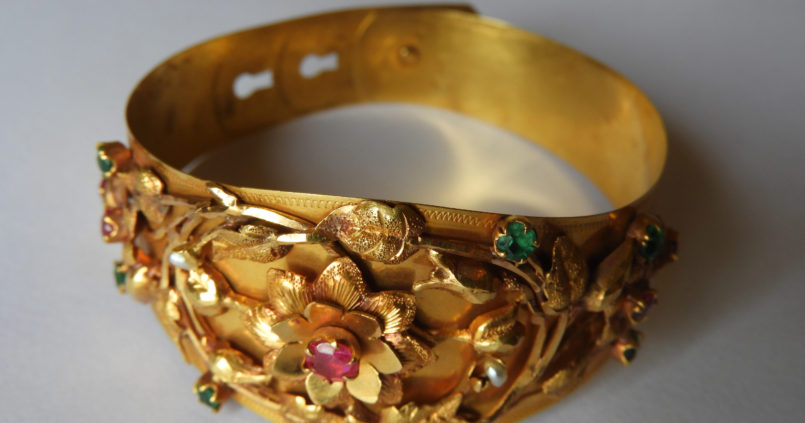 The very first time I first saw this exquisite piece of jewellery was in 2016, on my wedding day. I’d always heard of my maternal grandfather’s ancestry since childhood, and being born in a divided state has made me conscious about our political history – a history that this bracelet had survived. My grandfather, Bhabendu Bikas Majumder was born in the family of landlords from Panchgaon in Noakhali district (now in Bangladesh). He was however brought up by his maternal grandfather Gopal Biswas at Dashani, Khulna. He was one of ten siblings : three brothers and seven sisters.

My grandfather recalls his mother, Snehalata Majumder – to whom this bracelet originally belonged – to always be well dressed and adorned. Some of the family members even remember her being weighed against gold during her marriage. It’s no wonder that even after the loss of a huge amount of possessions during the Partition, she had enough to gift everyone from the next generation.

It was the 10th of October 1946, the day of Kojagori Lakhsmi Pujai, which is always performed in Bengali Hindu households during the evening on Purnima (full moon day) in the month of Aswin( mostly October). A Muslim woman who worked in the zamindari household informed the Majumders about the probable attack by the Muslims during the evening prayer the same day. But despite this warming, the puja was organized, as the Majumders probably could not fathom the amount of disaster awaiting them. In the evening – just as they’d been warned – gangs of Muslim men entered the household, plundering everything, killing the kanchas who guarded the doors, and taking the gold idol of goddess Lakhsmi. When they finally reached the landlord, my great great grandfather, Lakshmi Majumder,  the mob could not decide whether to kill him or not. He was a civil lawyer who had also helped a lot of Muslims. So they spared his life but chopped off his thumbs from both hands to weaken the spirit of the rich zamindars. It was the threatening to the Hindus of the district to flee to India.

The family’s Muslim friends and acquaintances advised them to convert to Islam as stated by Lakshmi Majumder in a statement (which is recorded in Communalism in Bengal: From Famine To Noakhali, 1943-47, 2005). Agreeing that this decision would be the best, he, along with other Hindus of the region, made their way to the nearby mosque to get converted as they had no other option.  But to their surprise, armed Muslim rioters were waiting to attack them at the mosque as well. The entire family abandoned their house and property and escaped to Dashani, Khulna and stayed there as long as the unrest continued. Meanwhile Snehalata Majumder threw away all her jewellery in the lake behind their house. When the riots had subsided, the family returned and found a house which was left unoccupied and started living in it. Surprisingly, they retrieved a large amount of possessions and  jewellery from their old neighbours. This bracelet in question is one such item, among many others.


Though the family continued to live in East Bengal during the Partition, they no longer had the same wealth or status. As a result, my grandfather’s elder brother came to India in 1948 looking for safer future, and my grandfather joined him in Calcutta in 1949 after finishing his matriculation. They stayed in a slum named Dilwar uddin Basti (presently near Picnic Garden Calcutta). They survived on the little money they had and on the daily wage that his brother earned. They contacted their eldest sister Renu, who was married in Calcutta, and went on to stay with her. In 1951, Dilip Majumder, my grand uncle joined the Chittaranjan Locomotive Works as a fitter. After finishing graduation from Bongobashi College, my grandfather joined as a Mechanical apprentice at CLW. He worked their till fifty eight and retired as a deputy chief mechanical engineer. The Partition not only divided the country but numerous families for their entire lives.

And so, this pair of bracelets has survived for a century since the turbulent times in which is was made. It measures  6.5 cm in radius and is fitted with stones of emerald, ruby and white pearls on pure gold. They are handcrafted and lightweight, and there is even a photograph of my great-grandmother, the original owner, wearing both bracelets on each arm. The pair was given by her to her daughter-in-law and my grandmother, Anjali Majumder, as a gift of marriage. Subsequently, on my own wedding day, one half of the pair was given to me. I had never met my great-grandmother in person but when I wore the piece which once belonged to her I was overwhelmed. The story of survival of this nonliving material is quite synchronized with the lives of my family members who could rebuild their fortunes after the crisis that the great Partition had brought upon them, and that is what makes it extraordinary and valuable.