A Secret History of the Mallik family 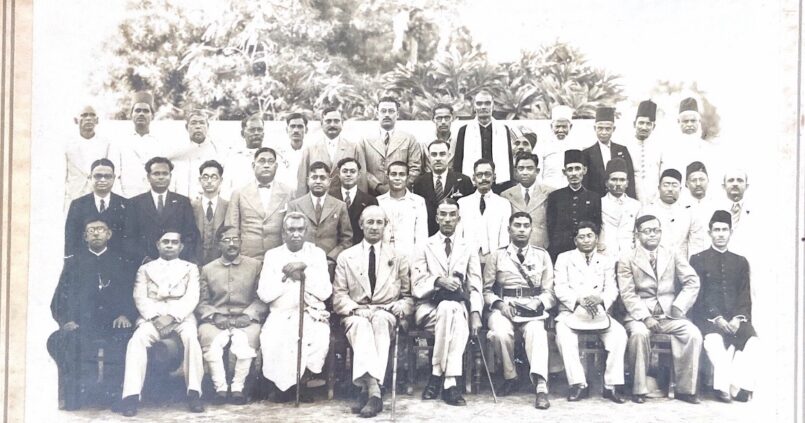 I belong to a mixed heritage family, born to an Anglo-Indian mother of Scottish-Irish ancestry and a Bengali Hindu father. Growing up, I encountered a wide-ranging but often contradictory memories and inheritances. My paternal grandfather, my dadu, died in 1990, almost a decade before I was born. He was a student of History at Presidency College, Calcutta and a well-respected and much-loved IAS officer. Amongst his many achievements, he was the Land Reform Commissioner and the Secretary of the Panchayat and Rural Development that introduced land reforms in West Bengal in the late 1970s.

Though my paternal grandmother, my thamma, stitched my childhood with stories of my grandfather, yet what dominated the narrative of my inheritance were the stories of Partition. My thamma came from an extremely wealthy, upper-caste zamindar family from Kishoreganj, present-day Bangladesh, who had lost everything during the Partition of India in 1947. I grew up seeing large framed pictures of the ornately designed mansions she grew up in and the elephants her family owned, hearing stories of the many palanquins her mother used for travel, and the large iron boxes that contained the gold mohurs that were bought off the revenue they collected. It is this story that remained central to the inheritance I was bequeathed; it was this story that pushed my family to go visit Bangladesh in 2014 in search of any remnants of a former life. But it was also these stories that overshadowed the legacy of my late paternal grandfather’s family- the Malliks (earlier, Mullicks).

My paternal great-grandfather, Kshirode Behari Mullick was born in Khulna, Undivided Bengal. My thamma didn’t know much about her father-in-law apart from the fact that he died in 1959, a few years before her own marriage, and that he was an established lawyer and an officer of the Bengal Legislative Council. In fact, my first ‘encounter’ with my great-grandfather was through a coffee-colored visiting card with the letters “Rai Bahadur Kshirode Behari Mullick: Bengal Civil Service”, and a framed picture of him, at an uncle’s wedding ten years back. The chaos of the wedding prevented me from probing deeper into who he was and why I knew so little of him. It was only years later that, as an undergraduate student of history, that I ran into my great-grandfather and his siblings in the books and readings I was assigned.

My great-great grandfather, Prasanna Mullick was a Dalit farmer, who had settled on the land his family had cleared a generation ago. It was in his memory that my grandfather and his 20 odd male cousins were bequeathed with ‘Prasanna’ as their middle name. To support their upward mobility, the family had adopted the upper-caste surname ‘Mullick’ in the mid-nineteenth century. But as the family lore goes, in 1902, the local zamindar, recognizing the growing value of the land, murdered Prasanna in an attempt to steal it.

However, his fourteen-year-old son, Kumud was able to sell the land and flee to Calcutta with his mother and five remaining brothers (Mukunda, Kshirode, Atul, Pulin, Nirode). In Calcutta, the family faced immense trouble finding accommodation due to their caste. Ultimately, it was a non-Hindu landlord who gave the family a place to stay. And in gratitude, Kumud hung the landlord’s photograph in his house for the rest of his life. Using the meager sum of money, Kumud managed to enroll himself into law school and eventually ensured all his brothers became lawyers as well.

It was during their tenure as front-rank advocates in the Calcutta High Court that the brothers decided to sit for the Indian (Imperial) Civil Service examinations. As a result, Kumud became the first Scheduled Caste officer of the Bengal Civil Service, soon to be followed by all his five brothers. My great-grandfather, Kshirode, eventually got elected into the Bengal Legislative Council in the 1920’s. Years later, the Government of India Act of 1935 put into motion the Assembly elections of the Bengal Province. As a result, A K Fazlul Huq became the Prime Minister of Bengal and formed the first government with Kshirode, and his younger brother, Pulin as its members, and their older brother, Mukunda as the Cooperative, Credit and Rural Indebtedness Minister.

In 1941, in response to the Second World War, the Naogaon Sub-Divisional War Committee was established and Kshirode was made its President. Despite his successful career in government service, the experience of caste injustice in the early years of his life never seemed to have left him. He and his siblings continued to be active proponents of their caste and the grievances they encountered. As a result, they were offered a Congress seat in the Constituent Assembly, however, they rejected it outright, as they considered the Congress to be a landlord party. As a representative of his caste and for his services to the Bengal Government, the Viceroy, on behalf of King George VI, awarded my great-grandfather the title and honor of first, Rai Sahib (1942) and eventually the more prestigious, Rai Bahadur (1945).

It was at the wedding I had mentioned earlier that I first met my grandfather’s younger brother Sunil. I distinctly remember a relativementioning to me that this bachelor grand-uncle of mine most likely had the medals that were awarded to my great-grandfather. However, this was mere speculation. Years later, in the summer of 2019, at a party hosted in our family house celebrating my undergraduate convocation, a grand-aunt (Sujit’s wife) gifted me and my younger brother each a 5-inch by 3-inch rectangular object wrapped in a shiny pink sheet. Assuming it was chocolates, we kept the gifts away. It was only in the evening, with the last of the guests leaving that we began opening the gifts. When we unwrapped the pink shiny paper, we found two dusty dark-greyish boxes that contained, to our utter surprise, the Rai Bahadur and the Rai Sahib medals. We later found out that after my grand-uncle’s death, these were discovered in his house. The citations that accompanied the medals, kept in an ornate silver scroll, were probably misplaced.

Each silver medal contained the title encircling the bust of King George VI on the front, and was engraved with my great-grandfather’s name and date of conferment on the back. These medals were minted at His Majesty’s Mint, Calcutta, which continues to produce medals for the Government of India.

That summer, my thamma also showed me a set of silver cutlery that belonged to my great-grandfather. While it was not typical for a 1920’s Bengali household to use cutlery while eating, my great-grandfather considered these as a symbol of his engagement with notions of westernization. As a student of history, I recognize the problems of an argument where lower caste individuals in India saw Westernization as a way of upward social mobility. However, for my great-grandfather’s generation, I believe it was a reality to counter caste oppression. The acclaimed writer, Nirad C Chaudhuri, describing this westernized Mullick family that his niece, my thamma, married into, writes in his 1989 Thy Hand, Great Anarch! India 1921-1952, “[they were the] most eminent leaders of their caste and were very wealthy men…. who on formal occasions even wore the full English morning dress.”

It was this history of caste struggle and of political action that remained relatively unknown not only to us, but to most members of my father’s generation. The objects in my household- the medals, the photographs, the silver cutlery- formed the link between me and the political history of my family. These objects remain the only tangible evidence of my great-grandfather’s inheritance. As I engage with these objects on my walls, in my kitchen, in the torn dusty photo albums, I recognize the secret history of my family. And now, I am left with the task of giving meaning to this inheritance.