A Matter of Time: the collection of Puran Singh 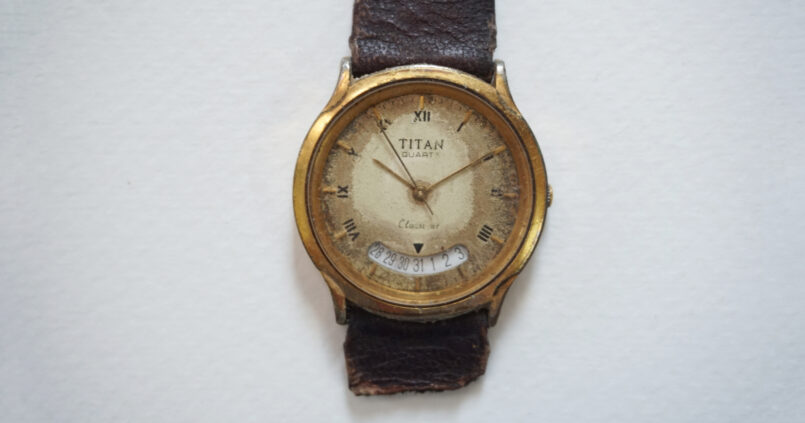 When my grandfather, Puran Singh, first visited Lucknow as a fifteen-year-old to participate in a function organized by the government school, he could have never imagined that one day, his fortunes would be paved by the same historic city. Puran Singh was born in 1935 in the quaint village of Velli, tehsil Budhana, Muzaffarnagar, United Provinces. His father, Lal Singh, was a hardworking farmer who expected his only son to learn the agrarian trades of tilling soil, sowing crops and harvesting. Growing up in the sugarcane belt of Northern India, my grandfather developed a passion for education – a rarity in his family – alongside fulfilling his father’s wishes of working in the fields. And despite not being officially enrolled in the primary government school of the village, he made sure to never miss even a single class. The teacher at the local primary school played an important part in kindling his passion for studies as he took it upon himself to educate my grandfather.

In the early 1950s, when India was a newly independent country, the Panchayat of the nearby villages decided to lay down rules against the practice of dowry, in order to lessen the unnecessary expenses that took place at weddings. In 1954, my grandfather’s marriage was arranged to my grandmother, Balbiri Devi, who belonged to a large household with twelve siblings, her father being the chaudhary of eighty villages. And yet, the baraat, the procession from the groom’s side that would ordinarily comprise dozens of jubilating relatives, consisted of only five people including my grandfather, making the wedding a rather intimate affair from his side. Despite being only nineteen years old at the time, he was particular enough to decline any offer of dowry and accepted but a token of one rupee from my grandmother’s family. This act of virtue can perhaps be seen as a cornerstone for how he lived the remainder of his life.

As it would aptly appear, my grandmother’s personality complemented my grandfather’s. She remained in the village all by herself for thirty-seven years, while my grandfather, who worked in the city, visited only during festivals. Taking care of their children as well as looking after the house and fields, she took all responsibilities in her stride. If my grandfather’s nature was to meticulously plan everything beforehand, my grandmother was easygoing and let destiny take its course. The couple was united only when my grandmother finally moved from Velli village to Lucknow city in 1996.

On that first trip to Lucknow in 1950, from the grand sum of Rs. 10 that my great-grandfather had given him for expenses, my grandfather bought his first copy of the Bhagavad Gita from the famous Gita Press at the railway station. This shlok from the Gita – karmanye vadhikaraste ma phaleshu kadachana, which roughly translates to: always think about your duty and work towards it without thinking of the fruits it will yield, the fruits should not be the motive of the action, became the mantra of his life. My grandfather believed in God, yes but more than that he believed in the moral duty of man. He owned a hardbound collection of the sacred Hindu texts, and since he was well-versed in Sanskrit, read them devoutly during his formative years. But what was greater than merely reading the Vedas, is that he made it a point to apply their teachings to his everyday life. He believed that it was only by sheer hard work that an individual could bring about a change within himself and the society.

Now that I look back, I realize how much his ethics have influenced my own personality. His daily attire of white cotton kurta pyjama was never complete without his wristwatch and a pen tucked into the chest pocket. A wristwatch may be a mundane item of utility, but to him it was an object of great value, for throughout his time, he remained conscious of time, both his and other peoples’. He made sure never to arrive late, and neither did he ever make anyone else wait for him. Over the years, this habit of punctuality trickled down to every member of the family, who adopted it as one of those subliminal and intrinsic traits.

I have three of his wristwatches in my bedside drawer, the oldest one being a Titan Quartz with a gold dial with roman numerals and a small space at the bottom to indicate the date. Almost thirty five years old, the brown leather strap has worn and weathered. But often when I hold it in my palm and trace the rough edges of the leather strap, I am reminded of my nana’s perseverance, of how much more there is for me to do, and how little time we all have to make a difference in our lifetimes.

After his marriage, when my grandfather decided to return to Lucknow, it was to pursue his Masters in Mathematics from the University of Lucknow. Upon completing the degree, he succeeded in securing the post of a Professor of Mathematics in Kanyakubj College and taught there for the next thirty-nine years.

It is often the quietest, most commonplace objects that bear the loudest testimonies of their owners. And so it is with my grandfather. Apart from his wristwatches, the other item he was attached to – perhaps because of his occupation as a Mathematics professor – was a palm sized calculator that he had bought on his travels to New York and Geneva to attend a UNESCO conference in the year 1983. As a child, I recall being in awe of the object because of its compact size and the fact that it was solar powered. I would consider it an honour if he ever asked me to fetch the calculator from his bedside table drawer. And over the years, I naturally used every excuse I could to be able to use it on my own. I’d stand near the window with the calculator in my outstretched hand, thinking that through my efforts, the solar powered calculator was getting charged. It may look ordinary to most, but it is special to me because it was so dear to my grandfather. Along with his wristwatches, it still sits safely in my bedside drawer.

In 1963, as a young man in his late 20s, my grandfather embarked on opening a school and named it Pioneer Montessori School.  This was not an overnight decision, though, but one whose passion had probably been ignited in his own youth, as the first person to have stepped out of an agrarian occupation. His intention of educating young children was not only to focus on basic textbook knowledge, but also to inculcate values of honesty and handwork. His motto, lived and learned, became “Work is Worship”. When the school first began in a rented premises, he paid for the students’ books and other necessary expenses from his own pocket. Word eventually spread and many eager parents turned up who were willing to pay the fee.

And so it was that from humble beginnings, my grandfather, Puran Singh, rose to not only become the Head of Department of Mathematics at a respectable government college in the city of Lucknow, but also establish a number of schools for young children, in an effort to make education accessible to all.  In the year 1964, he travelled to Barabanki, a district almost thirty kilometers east of Lucknow, to establish a school that had its roots in imparting quality education. The school that began in a rented room slowly grew into having its own premises and over the years spread to different areas of the city.

In 2014, my grandparents celebrated 60 years of marriage. One month after that, my grandmother passed away. Thirteen months after that in August 2015, barely 12 days before his 80th birthday, my grandfather left us too. It hurts my heart that he passed when he did, for he had planned to celebrate his 80th birthday among family and friends, but I know his legacy is well-preserved.

He left an indelible influence on my personality and my conscience. Having grown up around him, I have been witness to his passion and dedication to the tenet of education, and the respect and care he showed the staff that worked tirelessly with him. Over the years, I have imbibed so much by simply being in his presence – most importantly, the value of time and punctuality. On my twenty-first birthday, a couple of years after my grandfather had passed, I decided to make his habit of wearing a wristwatch a part of my daily attire too. Before that, I’d never cared to wear a wristwatch, but I wished to inculcate even the most mundane of his habits. And rather than a modern, digital watch, I chose to – like him – go for a gold dial, leather strapped analog. I have made this so much a part of my person, that now, something feels amiss if the watch is missing from my wrist for even a single day!