Cultural bridges of an era gone by 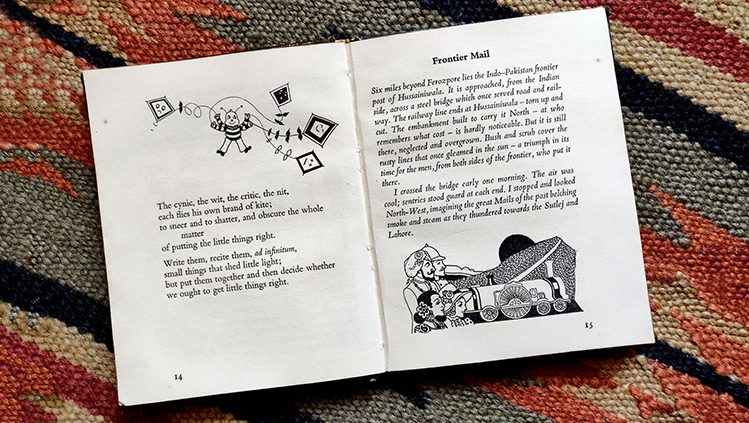 Recently, my husband and I were digging through and clearing several boxes of miscellaneous items that belonged to his father and grandfather. One box in particular was a treasure trove of books – classics, obscure Russian short stories, books on art. While my ‘to keep’ pile was growing in height by my side, I pulled out this tiny book and it immediately caught my attention.

Upon opening the book I read a little note addressed ‘To Promod’, my father-in-law. I had a vague idea that my father-in-law had visited Edinburgh and Zambia in the 80s for something called ‘Comex,’ a movement to bring unity, peace, harmony and oneness among the Commonwealth countries. Essentially a first of its kind, cross-border cultural movement.  I was excited. I had to find out more. But, before that a little bit about the book to give the reader some more context.

‘Let’s Put the Little Things Right’ is a book that was first published in 1973. It was written by Colonel Lionel Gregory, the founder of Comex – The Commonwealth Expedition. Comex was started in 1965 as an expedition from Britain to India in support of the multi-cultural ideals of the then called British Commonwealth. The book belongs to Promod Shanker (my father-in-law) and was presented to him by Colonel Gregory himself on Commonwealth Day on March 14, 1988. In the early 70s, my father-in-law was working with the Times of India group in New Delhi. At the time he was also a performing Sarod player under the tutelage of Ustad Amjad Ali Khan. He was introduced to Colonel Gregory by comrade and tabla player Kamal Kant Sharma. The Colonel wanted to record a song for which he needed resources and Promod Shanker helped him organise the same. However, this was only the beginning of their association. In the late 80s, COMEX invited the two Indian musicians to participate in the exchange in Zambia and Edinburgh. Colonel Gregory presented him the book in the hope of getting one of it’s pieces published by the Times of India.

The author attributes some of the ideas to conversations he had with Jawaharlal Nehru. I am compelled to include this opening excerpt from the book as a prelude. This will give you an introduction of how the idea of Comex came about from the founder himself.

“The idea came out of a meeting at the Gymkhana Club in Delhi in October 1962. China had attacked India along her northern frontiers and the Indian Army was committed to a duel in the mountains. In Delhi everything moved more quickly – bicycles, trishaws, taxis and people. Even the bullock carts on the outskirts of the capital were seen to trot. But most of all it was conversation that quickened. Debate ranged over the highest issues – only big questions were worth discussion. What support would be forthcoming from the United States? What attitude would Britain adopt? What should Nehru do? How should the Commander-in-Chief deploy his forces? These were only some of the questions that began and ended the day in every home, office and public meeting place. There were new and urgent reasons for going to the hairdresser, visiting friends or attending a bridge session at the club. It was good to talk, of course, but it also reduced the amount of work done.

Some of us had agreed to meet at 7:30pm. By 9:30pm we were all present – Sarjit Singh Garewal and his wife, Davindra, Prithi Singh, our hosts from the External Affairs Ministry and others. Conversation began with an observation on punctuality and continued with reflections on failing to keep appointments, to telephone, to answer letters and so on. It was then someone remarked that we ought to spend more time getting little things right. My friends toyed with the idea of starting a club for putting little things right with an ant, one of the smallest and most industrious of God’s creatures, as the motif; but it got little beyond being an idea.”

The book, that currently sits proudly on a little bookshelf in our humble Bombay rental is hardbound, about the size of a postcard. The black and white cover has an illustration of an ant in a tuxedo, which is implied to be the mascot of Comex at the time. There are 16 short stories or impressions written by the Colonel with illustrations by Lone Marslund. The pieces are varied in nature and describe observations made over time by the author about India and it’s culture, based on his experiences traveling around Northern India. The last piece is a note to the members of Comex 5. The first page of the book contains a hand-written note to my father-in-law from the Colonel and the pages have turned yellow with time.

When I first met Promod Shanker (a few years before I was married) I was truly in awe. His reputation preceded him. He was a hero to several of my colleagues and acquaintances in the music industry. And several others felt indebted to him for providing them with opportunities when they had none. But, more than that he was someone who carried the torch of humanity. His faith in all things good was insurmountable and this is the biggest lesson of life that I took from him. At this moment, I am left wondering how does one begin to articulate a life that was so multi-faceted in its very being? A life all encompassing of myriad fragments that when stitched together creates a timeless world of experiences.

As part of my research for this piece, I got in touch with Kamal Kant Sharma, the tabla player who went on the expedition in 1985. I also managed to get in touch with a lady called Gill Back, who had been on the same expedition and had reconnected with my father-in via Facebook a few years ago. I called her one Saturday evening – WhatsApp video call. She was enjoying the summer sun in her beautiful home in the Swiss Alps.

The year was 1985 and Gill was working in PR relations in London. A newspaper article about Comex caught her attention. They needed someone in PR to help raise money for the forthcoming expedition. Gill informed me that 1985 marked 21 years of Comex. The host country was Zambia.  She arrived in the capital Lusaka, a week or so after it started. When she reached there she was a bit surprised. This was nothing like she was used to. There was no organisation and everybody fell to role. In the modern world, of course we have a different term for it. We call it DIY culture.

Keeping in mind tropical weather conditions Gill had taken ‘light clothes’ for the expedition and one of the items of clothing was a sari. For some strange reason she had thought it would come in handy and had gone to the Pakistani quarter of London to buy herself one. It had already been a few days of the expedition and one day Gill had been going on about her business when she encountered Promod for the first time. There were 50 odd delegates taking part and she had not yet met all of them. However, that day she had worn a sari and thought that perhaps it was what caught his attention.

Comex was an opportunity, as you may have already figured out, to break down barriers and prejudices and pre-conceived notions and forge friendships across boundaries. One of the highlights of Comex was a concert by the delegates of various countries. This was to take place at the Presidential Palace in Lusaka. One day Greg (Colonel Gregory) brought an A4 sheet of paper with the ‘program’ for the concert written out in brown ink. Gill needed to find a printer to print proper programs befitting to be presented out to the high commissioners, ambassadors and other VIP guests who would be invited to the concert. Accompanied by my father-in-law, the two set off to various printing companies in Lusaka. The instructions were to print green and gold programs. They managed to find a company and six days before the concert the programs were printed in green and gold on glossy paper – a mighty irony in Gill’s observation considering the economic conditions of the state of Zambia.

As she shared this small anecdote with me it brought a smile to my face. The sheer simplicity of the moments that were shared by them 33 years ago solidified in my mind, the impact he had on peoples lives. This was how he liked to live. A great believer of the present, never worrying about the past or the future. It was his modus operandi.

“The universe is one being. Everything and everyone is interconnected through an invisible web of stories…One man’s pain will hurt us all. One man’s joy will make everyone smile.” – Shams of Tabriz