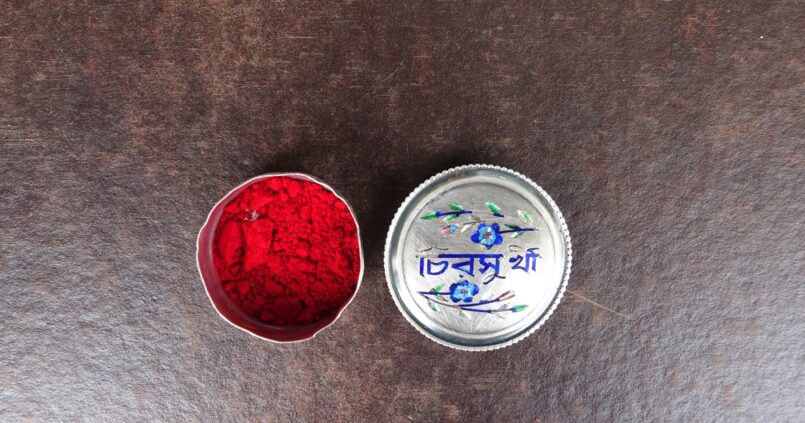 One of my fondest memories of my Thamma or paternal grandmother is from the 90s. I am sitting with her in our sprawling verandah overlooking a rose garden, and learning to sew. There was a certain warmth in the red oxide floor even on cold December afternoons like those. Hemming, French knot, satin and cross stitch—I’d find utmost pleasure in watching her embroider tablecloths and napkins, her hands aged and wrinkled, with sheer dexterity.

She would have been 98 this year. Born in 1922 in British Burma, Pratima Roy (née Das) had witnessed some of the most horrific events in the history of the Indian subcontinent. I have faint memories of staying up late in her room when she visited us in Durgapur, West Bengal during vacations, listening to stories of war and escape.

Satish Chandra Das, my great grandfather, was born and raised in Sonargaon in undivided Bengal. At 18 years of age, he was hired to play football in Burma, a country that was home to many Bengalis in the 19th century. Since Calcutta was the cultural capital of the British Raj, it maintained close associations with Burma for economic, commerce and political reasons. I am told educated Bengalis were also sent to Burma to handle bureaucratic positions. My great grandfather was offered a job in the railways there.

Das married in Burma, and his job postings took the family to different towns and cities where they became acquainted with the local language and culture. During World War I, he travelled to South Africa alone on deputation as part of the Military Engineer Services for a year. Later in 1941, when there were rumours of an imminent Japanese attack on Burma, he chose voluntary retirement and decided to move out of the country. The family left on a ship ferrying from Rangoon Port to Chittagong, a journey that took them seven days to complete, followed by a train ride to Dhaka.

In Dhaka, Thamma, now 19, enrolled herself at Eden College and completed her intermediate education. When her elder sister Nilima Das, whom I fondly call Khukudida, got married, she moved to Barisal with her to pursue a graduate degree.

But, Thamma had to abruptly stop her studies, for her brother-in-law had acquired a work transfer, and the husband and wife were moving to Calcutta permanently. So she packed her bags once again, this time for Mymensingh, a city known for its educational institutions. In 1946, she completed her graduation from the reputed Ananda Mohan College that was then affiliated with Calcutta University. Next year, when Partition took place, Thamma had started teaching at a school in Dhaka.

In 1948, when Thamma married my Dadu, Manindralal Roy, she was 26. A late marriage in her time would have been frowned upon, but she cared less as a career woman. He was charmed by Thamma’s beauty and confidence, and the union was supported by both the families.

Apart from several novelties received from family at their wedding, a widowed Pishima or aunt, gifted a vermilion case or shidoor kouto to Thamma. The beautiful silver container came with intricate meenakari work — motifs in shades of blue and green imitating flowers and leaves. Its uniqueness characterised by the engraving in Bengali letters — ‘chiroshukhi’ or forever happy. I believe after having lost her husband at a young age, it was Pishima’s way of wishing a lifetime of happiness to the new bride. The kouto would be more than 72 years old now, having been passed on from Thamma to my mother and then to me.

There was a time when the Bengali goldsmith or shyakra was revered, especially those from Dhaka. Their skills and craftsmanship were the hallmark of the jewellery of the era. I am told the women in my family often spent their idle time going through jewellery catalogues, and then placing an order with the local shyakra. Sometimes the goldsmith would put in a word with his karigars in Calcutta, where the desired piece of jewellery would be designed and created. Once ready, the jewellery would be sent back to the client in Dhaka or nearby towns by post. The payment would be completed by money order.

The exquisite meenakari work or enamelling originated in Persia, and travelled to the Indian subcontinent with the Mughals. The designs are painstakingly achieved by fusing fine powdered glass, while the distinctive colours are made using mineral oxides. The craftsmen often use the powder of semi-precious stones as well. Silver containers such as the vermillion case were treasured items with shidoor or vermillion at the core symbolising the identity of a married Hindu woman.

Dadu and Thamma were married for 46 years. As a working mother, her job often took her to various towns of east Pakistan, alongside which, she raised four children. Above everything, the couple was faced with the uncertainties of their future in a country that was ripped apart after Partition. But still, they chose not to move to India. Dadu’s occupation as a local zamindar, who dabbled in mortgage from time to time, seemed bygone. Thamma, on the other hand, boasted of a secure teaching job, which she refused to quit. It would mean starting everything from scratch, and that too in a foreign country. Considering her education and progressive thinking, she often seemed to me as the proverbial matriarch of the family. Their marriage stood the test of time given the upheavals of life torn by war and political turmoil.

And yet, Thamma went on to chase her dreams. She completed her teachers’ training programme and started teaching English, which was followed by being promoted as headmistress of a school in Cox’s Bazaar and finally in Comilla. My father was born here, in 1949.

In the next few years, a dramatic sequence of events took over the Roy household. The political atmosphere in east Pakistan forced Dadu and Thamma to take matters into their hands. In 1960, my grandparents decided to send my father to India, to a residential school in Agartala. At 11 years of age, little did Baba know that he’d never return to play at the ground next to his house or go fishing in the pond in the backyard. The rest of his siblings followed in the consecutive years.

In 1974, my parents got married and started a new chapter in Calcutta. After a few years, they moved to Durgapur, a steel township 170 kms away with a new job. My brother and I were born here. Thamma and Dadu continued visiting us from Bangladesh, a foreign and now newly-independent country. When Dadu passed away, she moved to India permanently dividing her time between her sons and daughter. The shidoor kouto then came to Maa who must have hoped to pass it on to me several years later.

Thamma left us in 2003. On the morning of her passing, I remember Baba staring pensively out the window. His exact words were — “It was Maa who wanted me to become a doctor.”

The heirloom has now found a permanent shelf in my crammed dresser in Mumbai. In my nine years of marriage, I could have filled it with borrowed vermillion from Maa albeit this post-bath ritual of applying shidoor seems like a thing of the past. What remains are letters of the engraving worn away over time just like life’s many storms. As I circle my index finger across the battered rim of Thamma’s shidoor kouto, I yearn to be the girl sewing with her in our verandah one more time.