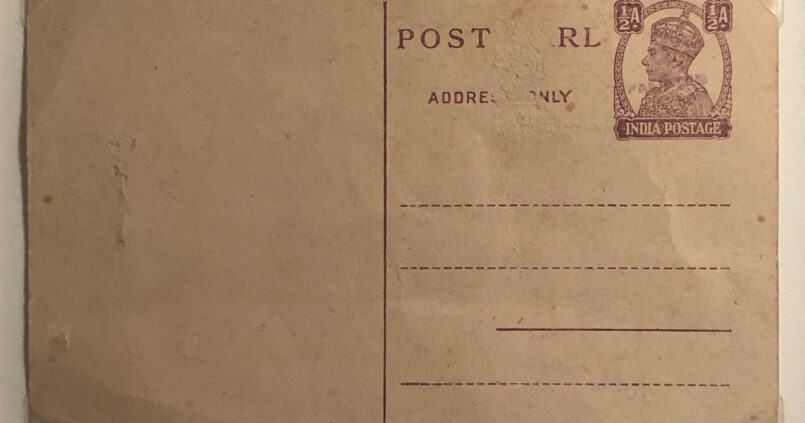 My Nanajan (maternal grandfather) gave this postcard to me when I was around ten, when we lived in the same neighbourhood in Ottawa, Canada. His name was Ahmad Din Bashir, but he went by A.D. Bashir. He was born in Lahore in 1913, and completed a B.A. in English and Persian literature at the University of Punjab through Forman Christian College. His father, Jan Mohammed Ahmed Din, titled ‘Khan Sahib’, owned residential and commercial properties, an ice factory, and was Registrar of the Punjab Medical Council & Secretary of the Punjab State Medical Faculty.

Nanajan’s family socialized in aristocratic circles and connected professionally with people of various religions and ethnicities: they were fluent in Punjabi, Urdu and English, and had the cultural capital to enjoy and celebrate human diversity.

Between 1943 and 1946 he worked in Simla with the Indian Civil Service, in the Office of the National Savings Certificate (NSC). The NSC was a British initiative, used to generate income for the government during World War II, to help fund the British Empire’s war expenditures. This was his war-time appointment during World War II. Citizens would buy these certificates, with a fixed interest rate, to be redeemed at a later date after the war.

The NSC initiative continued after World War II. Right before Partition, he was in charge of controlling publicity for all the provinces in British India; he made posters in 13 languages to publicize the National Savings Certificate, to encourage Indians to purchase the certificates as a way to save money.

In late 1946, he was transferred to the Indian Ministry of Commerce in Delhi. Based on his promotion and publicity work with the National Savings Certificate, he was recruited to represent the Government of India and participate in two overseas exhibitions in 1947: the British Industries Fair (BIF) in London and Canadian National Exhibition (CNE) in Toronto.

In August 1947, when British India was formally decolonizing, Nanajan was oceans away in Toronto attending the CNE. He had a booth, showcasing the
quality of Indian-produced materials. His main purpose was to sell Indian goods and develop trade relationships between Indian suppliers and clients attending the CNE.

At the time of Independence, he chose to join the newly-created Pakistani Civil Service, and this decision effectively terminated his employment with the Indian Government. I remember him telling me that when Pakistan was created, the new Civil Service used these Indian postcards and ‘Pakistan’ was stamped on top of the image of King George VI. For what purpose, exactly, I’m not sure. But when I received the postcard, I knew it was something special.

I kept the postcard in a box along with other letters. It was stored with other cherished memories, but never forgotten. This card is blank on both sides. When I framed it, I made the mistake of hanging it up in the living room in my apartment. The windows were practically wall to wall, ceiling to floor, which made the room beautifully bright and airy. This unfortunately made the purple ‘Pakistan’ stamp fade in just a few short years.

Now, this post card hangs in my office, in a place of privilege on the wall behind my desk, with sombre incandescent lighting bouncing off dark wood. Hopefully its new location will preserve the purple stamp so it doesn’t fade further, relegating it to a distant memory. I’m unsure where or when Nanajan acquired this postcard. It could have been during his time in Canada at the CNE, his brief time in Washington D.C. and London, England, trying to join the Embassies of Pakistan in both countries, or when he sojourned in newly-created Pakistan before helping to open the Consulate General of Pakistan in Sydney soon after Independence.

I’m amazed that he carried this postcard with him during his Partition travels, to his postings in Australia, Singapore, back to Pakistan, and then in his retirement years in Canada, spanning over 40 years and four continents.

This inheritance means the world to me, and not only because of its place in the Indian Subcontinent’s geopolitical history; it reminds me of the special bond that I had with Nanajan. When I was young, I spent more time with him than anyone else: in those formative years, I was always in his shadow. At his home, he asked for my help if he needed to tend to the garden or fix his car. I was always invited to tag along wherever he went. He used to take me in his car as well as in the bus to visit his friends.

He passed away at the age of 77, when I was twelve. In his lifetime, he had lived and worked in four continents, and had friends all over the world whom he kept in touch with until the day he could no longer hold a pen, type on a typewriter, or speak. I remember counting over a hundred cars in his funeral procession; I lost count after.

In my adulthood, from time to time, I reflect on the fact that he chose to give me this postcard, that he carried across the world, from his youth to mature old age. Whether or not I was Nanajan’s favourite, in his lifetime, only the Creator knows.