From the folds of my great-grandmother’s history 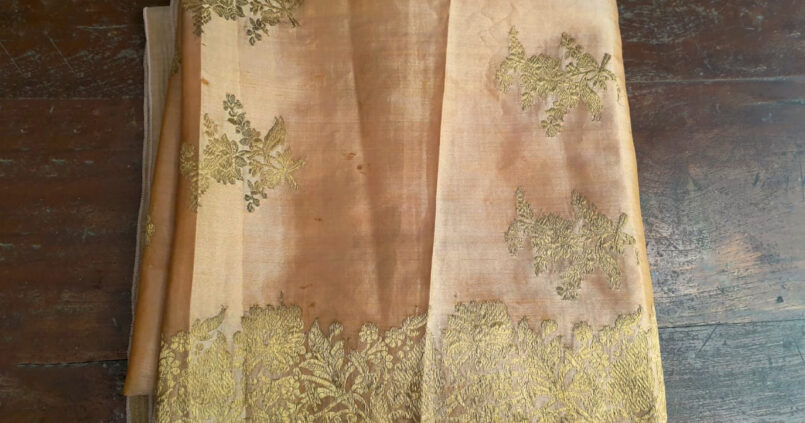 As a child, I often found myself looking at her photograph hung on a wall in my maternal grandparents’ house in a rather quaint room, which had once belonged to her. Bhabhi ji, she was fondly called, my mother’s paternal grandmother. Bhabhi ji, pronounced “pabh ji” in Punjabi. Her real name was Savitri Devi Bhalla, and I was reminded of her a few years ago because of a dupatta my mother had inherited from her at the age of twenty. The treasured heirloom was a part of bhabhi ji’s wedding trousseau and travelled with her across Hindustan, wherever her husband was posted for work, and finally, in 1947, to the refugee camp at Purana Quila, Delhi. Now, it rests with her granddaughter in the city she left it in.

She was known for her grace and beauty, and as I spoke to her youngest son, my maternal grandfather, Virender Singh Bhalla, his description made me think of her as nothing less than a dream. He remembers her to be a devout vegetarian, who visited the gurudwara every morning, and then adds, ‘Pura mohalla janta tha unhe, barkat thi humare ghar pe.’ The entire neighbourhood knew her, and because of her, there remained abundantly good fortune at their house.

Savitri Devi was born in Multan in 1915. Eldest among her siblings, she lost her mother at a young age, and as a result of the father’s position at a government office, the family divided their days between Simla and Delhi. In the year 1929, 15-year old Savitri Devi was married to Anant Singh Bhalla of Lahore, a schoolmaster whose father, Sardar Sahib Sardar Prabha Singh Bhalla, was a Superintendent in the Punjab Police.

As a result of the union, Savitri Devi devoted her life to her husband and their three children, of which my grandfather was the youngest. Of their life together, there is a only a single aged monochrome photograph. However, news of Partition made the family’s survival rather difficult, and as the violence grew in a once-syncretic Lahore, Savitri Devi Bhalla lost her husband in June 1947.

It is a difficult thing, putting history together when those who have lived that history are no longer around to furnish it with the details. And so it was, with Savitri Devi’s story too, that I foraged around the family. I wanted to know about the woman who once wore the beautiful dupatta my mother had inherited, about how she had lived life, particularly as a widow, at the most turbulent time of Undivided India’s history. And so, I approached the oldest person in my family – my grandfather’s brother and Savitri Devi’s eldest son, Joginder Singh Bhalla

One month after his father’s death, Joginder Singh traveled to Delhi. His maternal grandfather, who lived on Babur Road, had managed to find him a position with the government and he left Lahore to work, so he could send money home for survival. At the time, the family – comprising of Savitri Devi, her father-in-law, S.S.S Prabha Singh Bhalla, and her two younger children – lived in Model Town, a posh colony, outside of the Walled City. In Pran Nevile’s most celebrated book, Lahore: A Sentimental Journey, he states that the township of Model Town, located about six miles from the city, “comprised of houses mostly owned by retired government officials, many of whom had during their service, earned titles [from the British Raj]”. And so it was the case for Sardar Sahib Sardar Prabha Singh too.

Joginer Singh recalls how by July 1947, despite the border not having been officially announced, people had already begun to migrate to cities where they thought they’d be safer. But the family believed that a city like Lahore, which had long fostered Hindus, Muslims and Sikhs, would remain as is. Hindus would continue to live in Pakistan, and Muslims in India, for it was merely the system that was changing, not the soil or its people.

But strange things happened in those months between when Joginder Singh left and when the family eventually joined him across the border. In the first week of August 1947, a Muslim family suddenly arrived at their doorstep and moved into the house. It was a large space and so they occupied the empty rooms, and eventually, the two families even ended up sharing parts of the house. “Yeh humara ghar hai”, he tells me of what they said, “and they just started living there!”

And as I hear this, I am shocked. I imagine a rather bizarre patchwork-like joint-family set up, wondering what all they would have shared – whether they’d have divided food in the time of rationing and hunger, whether the Sikh family and Muslim family cooked similar or different things, whether they’d have protected one another from riots and other harm, whether they were cordial or hostile in the beginning. I wonder how Savitri Devi and Prabha Singh would have felt to have people move in to their home without invitation. But most of all, I wonder whether the Muslim family are still living in that Model Town home in Lahore, and what their side of the story was. For history, particular the personal histories of Partition always have two sides to consider.

But this much is clear that the desire for soil and home was greater than the “system” for the Bhalla family continued to live in that house with the migrant Muslim family for nearly two months, ironically on a land which was being ripped apart on the basis of religion. In the recesses of Joginder Singh’s memory, bits and pieces of that shared history in that shared house remain; stories that his mother would clearly tell him when they spoke. “The family had clearly fled from a rural part of Jullundur, having lived in a kucha house, for when they arrived in Lahore and co-inhabited the kothi with us, they attempted to retain certain parts of their lifestyle. Around the walls of certain rooms in our pukka house, were plastered cakes of cowdung, as the children were used to sleeping like that. At one point, this was known to be beneficial to the health of the inhabitants…”

The family eventually left by train in September 1947, traveling across the newly made border to Delhi. In the documents of their registration in the city, the official date is November 15, 1947, which makes me wonder about the gap of three months. I doubt anyone can fill this gap now, for too much has been dulled by time.  I often wonder about the family’s journey across the border, and how in the course of just a few months, 32 year old bhabhi ji not only embraced widowhood, but was also forced to flee from her homeland. How does one simultaneously grieve the loss of a husband as well of a home, carrying only memories of the two? Remembering the tanga rides with him in the Walled City, the cream rolls from Crystal Restaurant and of the glances they stole of each other before they were married? My mother’s words somehow brought me closer to an answer – “For the rest of her life, she wore white and carried his photograph in a faded, golden tin box.”

Once in Delhi, the family lived for a while at the Purana Qila (Old Fort) refugee camp, until they received accommodation from the government as compensation for the property left behind on the other side. The social activist Anees Kidwai, who worked in the various refugee camps across Delhi, put the number of people in Purana Qila in the month of September at 80,000 – 100,000. The camp served as a base, both for Muslims who wished to go to Pakistan, as well as for Hindus and Sikhs coming in to India. What remains of their time in the camp are stamps bearing the words ‘REFUGEE RELIEF.’

I am told that till the end of her life, Savitri Devi continued to collect her husband’s pension, even when the financial conditions of the family were very good and my grandfather tried to persuade her against it, as there was no need.  I feel that maybe, by collecting his pension every month, she was able to keep him alive in her memory and closer to her heart. Her diaries reveal the notes tracking the monthly collection.

It is an incredible thing for an inanimate object like a dupatta to reveal so much about a family’s history. To become the fountainhead of memory, that leads to the unearthing of so many long-forgotten tales. Recently, my mother and I took the dupatta out again – a light peach silk with a broad yet intricate border, woven in a benarasi weave using gold zari.  Each booti on the dupatta has been carefully embroidered, woven into individual flowers using the same zari, adding sense of heaviness and grandeur to it.

After 91 years, even though creases have found a permanent home in the dupatta, the silk is still lustrous as ever, the subtle peach compliments and enhances the gold handiwork, making each stitch stand out brilliantly. On draping the dupatta, the zari overpowers the base fabric, bathing the entire piece in gold, and under sunlight, the colour shifts to a deeper peach, adding a greater reflection of the gold zari. To ensure the longevity of the precious heirloom, my mother recently hemmed its corners to protect the aged fabric from ripping.

For me, this dupatta is the essence of my maternal great grandmother, of generations of unearthed family history, and of a Lahore that was once home.  As I change the teh of the dupatta and fold it to avoid the creases from settling in any further, it makes me think of all the stories woven in its delicate threads and stored within its folds.