Glow of the grime 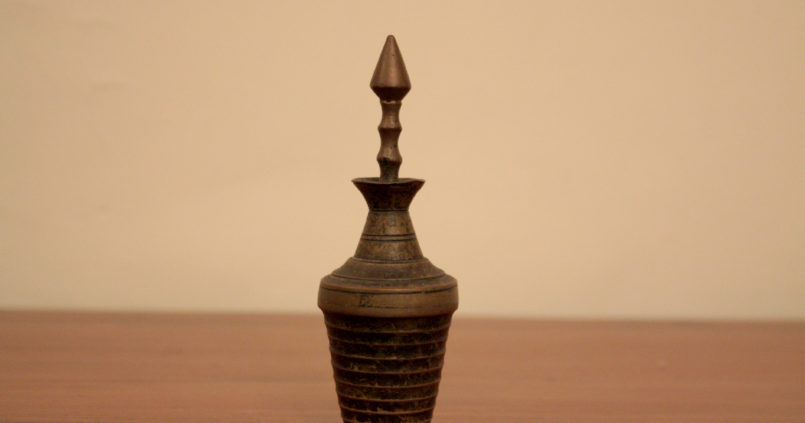 As far as we know, the word kohl comes from the Arabic word kahala, “to stain”. But is also known by many different words around the world – kajal and surma in Persia, kwalli or tozalli in West Africa, and kollurion in Rome and Ancient Greece. In India, kohl has several other terms as well, depending on the region, state or language. It is called surma in Punjabi and Urdu, kanmashi in Malayalam, kaadige in Kannada, kaatuka in Telegu and kan mai in Tamil.

As a substance, kohl remains a testament of cultural value – when I was younger, my mother and grandmother would apply it to our eyes to strengthen them, or sometimes even to ward off evil; Ancient Emirati women were buried with at least three things as the essentials for the afterlife- jewellery and pottery containing kohl; It was used as by ancient Egyptians as a form of adornment for the eyes, and also as a protector from the heat and glare of the sun; In Indian texts on the festival of Diwali, ladies are noted to have applied “collyrium” to darken their eyes. Apart from these cultural significances, kohl has always been a predominant part of Indian dance forms and their attires – Bharatnatyam and Kathakali dancers have used it to embellish their eyes and make them appear larger. 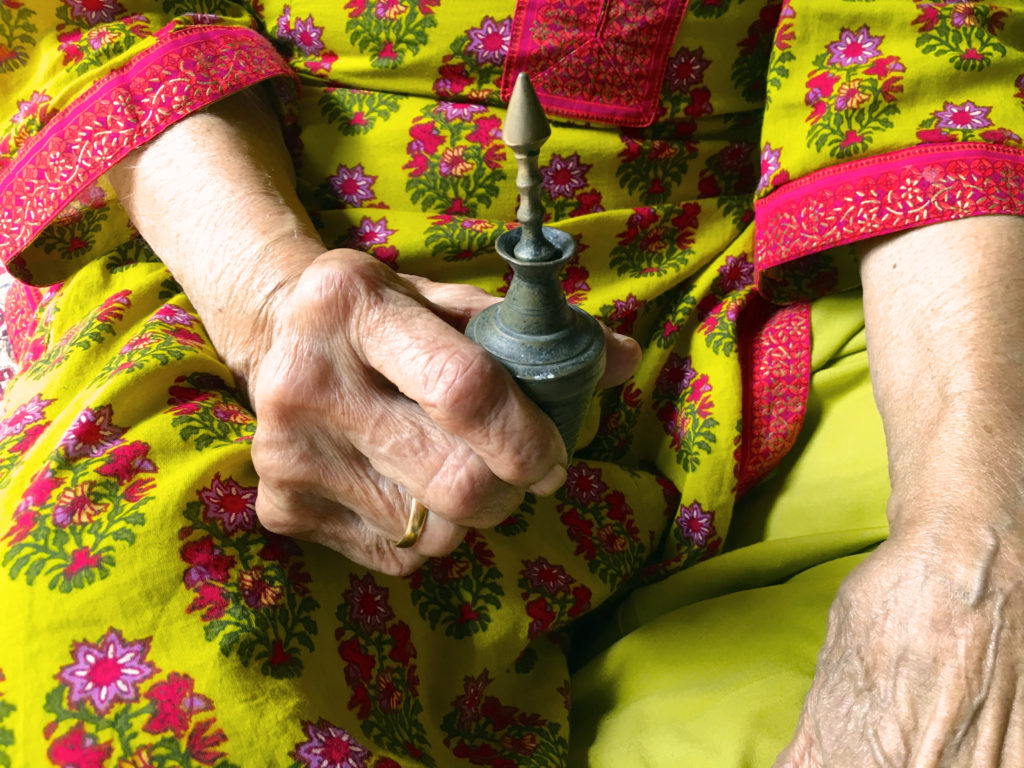 When my paternal grandmother, Bhag Malhotra, and her sisters came to Delhi from the Frontier Province following the Partition in 1947, Chandni Chowk was ‘the’ place to buy absolutely anything. At the time they were living in the barracks at Kingsway Camp, where my grandmother’s elder sister was the camp commandant, and when they could afford to, they’d venture into the Chandni Chowk on the weekends. Nearly 86 years old now, she fondly recalls how Surmewalas would sit in a line outside the Gurudwara Sis Ganj Sahib in those early years of Independent India. This surmedani was one of the first purchases my grandmother made there.

10 cms in height, and 3.5 cms at its widest in the centre, it is forged in pure brass. Though difficult to say when it would have been made, it is handmade – evident from the uneven edges – and is fairly utilitarian in its style, as compared to other, more ornate kohl pots and containers I have seen. The daani, the pot, came separately with it’s suramchi, the long stick (with grooves for the fingers to hold it) used to apply the fine black powder, and the surma itself would have been packed in a small bag. Many years after this surmedaani was purchased, and particularly when my sister and I were young, the women of my family began making surma at home. To keep the fine power as natural and safe for children as possible, they would pierce an almond with a long needle, and holding it, gradually burn the surface. As the almond burned, they’d hold a spoon with the concave side down and collect the soot on its surface.The consistency of the surma was not completely dry and fine, but rather a moist, viscous paste-like substance. Then with their fingertips, they’d dip them in the blackness and darken our eyes. The excess would be stored in a surmedani. This particular one, to be precise.

My grandmother’s sister-in-law, Swaran Lata, had her own fascinating way to make surma, with apparatus and ingredients altogether unique. On Diwali, in order to ensure that the largest diya of the house burnt all night, she would pour an excess of mustard oil into the earthen lamp. Then breaking down twigs of the neem plant into smaller sizes, she would enfold them in layers of cotton, to create a thick, wick-like shape and immerse it into the oil. The neem, an ayurvedic plant, known to repel germs and insects, also elongated the life of the burning wick. She would then balance an earthen cover on top of the lamp and as it burnt, its smoke rose and became soot, which collected on the surface of the cover. In the morning, she would scrape the soot off and mix into it, two drops of homemade pure design ghee or mustard oil. Long years after her death, each time I look at her photograph, I am drawn by the bold nature of her darkly lined eyes.

Though I have now graduated to using kajal in my eyes, my grandmother still uses the homemade surma. She applies only on special occasions and yet it stains her waterline for days. When I ask her to show me how it is applied, she slowly lifts the suramchi – turning it around inside in order to coat its surface with the surma -before she extracts it, and then drags it in one long stroke across her lower waterline, eyes closed. This process is then repeated on the other eye. The surmedaani itself, which had once glowed a luminous golden, has blackened over the years; a dark oxidation has settled into its grooves and ridges, but the surma within it, is still very much usable.

My grandmother often reminds me that to clean it and restore the aged surmedani to its original brass state, we can mix coarse coconut husk with the ash of some burnt coals and scrub the surface with it till it gleams. And I, seduced by the wonder that time has played on this item of antiquity, tell her that the long years of its life can be seen only through the glow of this grime. Till date it sits proudly in her bathroom vanity and each time it is taken out and used, I am reminded of the intimate traditions that the aged object has forged along the course of it’s life.