In praise of the everyday items 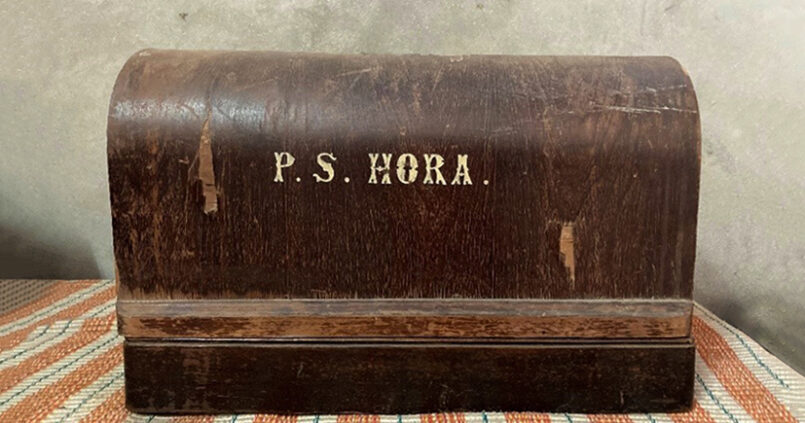 Beji and Bauji, my paternal great grandparents, were two names we were familiar with while growing up. But the faces attached to these names were only known to us through old photographs. Every summer as a child included a visit to Meerut, in specific to  “Ram Kunj” our home since the Partition and the stories of the days in Peshawar. As children, we almost never realized how much history and story may be embodied within everyday items. How a carpet, a utensil, a table – all items of daily use – may hold a world of memories within it; maybe even the beauty of Beji and the stern nature of Bauji.

If we look closely, we can find that there is much to the everyday that we take for granted. While jewels and clothes are often considered heirlooms as they are passed down the generations, I feel that the mundane items which seem to hold no visible value, sometimes reveal themselves to be far more precious over time. Albeit, most of what our ancestors had was lost in the days of Partition. But my stories of those days are few and sacred, thus making it a personal project in trying to piece together family trees and ancestry for the purpose of posterity.

My great-grandparents, Prem Singh Hora and Ram Kaur, though both Sikhs, were married in the early 1900s in a Hindu ceremony due to lack of the practice of Anand Karaj in Peshawar. The exact year seems contestable around 1912, when he was a college graduate and she was only 10 or 11. They barely saw each other during subsequent years, due to the prevalence of a ghunghat system and women not being allowed near the menfolk during the day time.

In what is called Beji’s Room in our house in Meerut now, there is a sewing machine that once belonged to her, and dates back to her pre-Partition days. The richer families in those days had an interesting custom at marriage, where included in every dowry was a sewing machine. Another interesting inclusion were dolls – with the girls being married at the age when they were to be playing with dolls, this was seen as essential to keep them occupied and also give them solace in a new house, starting a life they had little familiarity with. The sewing machine was often used to stitch clothes for these dolls – everything from undergarments to finery.

The sewing machine is a Singer, with gold embossed work and dates back to the early 1940s. Portable in nature, a standard 14 inches in size, it has a wooden cover with the initials P.S Hora (Prem Singh Hora for Bauji) painted on it. There are several other objects from this time that also have his initials painted on or carved into them – things like a set of silver spoons, the Chaur Sahib (used to fan the granth sahib); items that date back to before the Partition and have remained in the family till date.

Usually, the family stayed in Kashmir every summer, but the summer of 1947 was spent in Mussoorie. The sewing machine was taken along so that the women could keep busy, and spend the time stitching clothes for themselves and the children. Ram Kaur and five of her seven children, including my grandfather, had travelled from Peshawar to the hill station, accompanied by hired buses carrying items such as carpets, the sewing machine, utensils, grains , clothes – a significant part of the household was shifted, as the lady of the house was to be comfortable among her own belongings. This annual summer vacation felt almost as if they were setting up another house, albeit temporarily.

Little did the family know that the summer of 1947 would sever them from their homeland of Undivided India, and their hometown of Peshawar. While Beji was already in India when partition was announced, Bauji with his two elder sons reached Delhi by air and then took a taxi to reach the family in Mussoorie. Because much of the household had travelled with my great-grandmother at the start of the summer, the family were lucky to remain in possession of their belongings, whereas many refugees managed to get little across the newly formed border. Till most of 1948, my great-grandfather searched for a suitable home for his large family, until he found one in Meerut – this came to be known as ‘Ram Kunj’.

The sewing machine is just one of the precious items that can be traced back to a life before Partition. In Meerut, it was used by Beji as well as a female tailor, a darzani who’d often come by to use it. Regardless of the weather, the only material my grandmother remembers her wearing was silk and later she added mulmul to her wardrobe, a lot of which was sown at home only. Today, over twenty years have passed since it was used, and many people have even tried to take it or sell it. And yet, it has remained as a part of Beji’s room and as I see it now, a testimony of her life and days.

Another item from the years the country was growing into its new citizenship was a Munshi table. It is 18×12.5×11.5 inches in size, has a slant table top, and is something that I saw regularly being packed up and used everywhere we moved to. It’s only recently I found out it had actually belonged to Bauji. Dated somewhere to the few years between Partition and 1950, the table was an item of necessity for him, and my grandmother suspects this was one of the first items he purchased in independent India. On the carpet, hunched over the low table was where he sat daily to do his work, and inside the compartment, stored his valuables such as papers and money. This munshi table, along with a peedhi still used in our home in Gurgaon, are Bauji’s beloved items. In fact, my father remembers him carrying the peedhi to the roof every day, where he would pray sitting on it, and then eat a handful of soaked almonds.

I’d consider my family fortunate to have been able to bring so many of their household items to India. Post Partition and after a long correspondence between Bauji and the High Commission in Pakistan on the subject of Buried Treasures Operations, his sons, Rajinder Singh and Hawant Singh were able to go back in 1956 to retrieve some of the gold and silver bricks and biscuits that were buried in the grounds of the house and godowns. Bauji had requested that all arrangements and protection to be given to his son. A suitcase of documents still lie with us, including claims of agricultural land left behind, and of properties listed and submitted to the government for monetary compensation. Many would consider this a cheated process by the government, for whatever they received in compensation after the Partition, was often a pittance when compared to what had been left behind.

While I call the family lucky in not facing the hardships so many others had to, I have to note that it couldn’t have been easy to leave the only place they knew as home. I can only imagine the unspoken goodbye Beji bade to the house she lived in and grew up in. The house that had groomed her from adolescence to adulthood, where she had outgrown her dolls and become a woman, where she had given birth to her children. A house she had made a home.

In an interview for my 12th grade school project in 2014 , my grandfather’s brother, 87 at the time,  recalled with tears in his eyes, every lane and nook of Peshawar, as if it had appeared before his eyes. His last wish, like so many of our grandparents, was to go back and see his home once again, which like many remained unfulfilled. In a recent visit to my grandmother, she told my sister and me that a few days may never be enough to learn about their struggles and stories in a newly independent India, or to see all the items from before Partition – a glimpse into their life on the other side.

I realise that for most of us now, our grandparents are the only tangible connections to trace our histories and where we come from, and this realization has prompted my sister and me to record as much as we can before their passing, before it is all lost as we hurriedly grasp for as much information as we can.