The Clock from Sindh 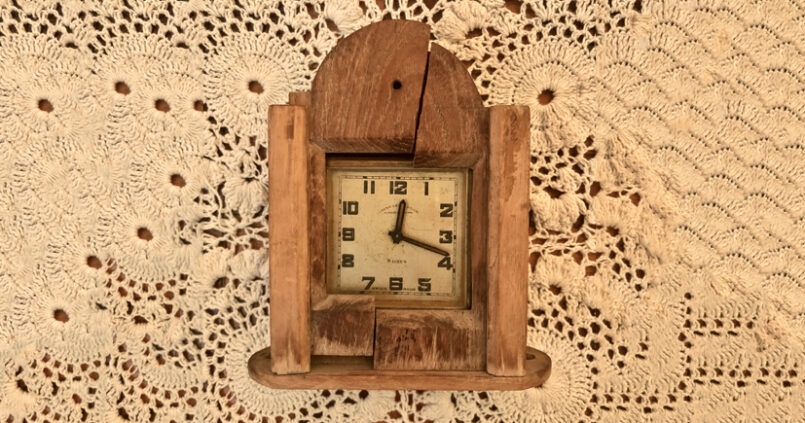 My grandfather’s clock is a champion at keeping time. If there ever were a count of the historical moments a clock has lived through, this one might win. The clock that I speak of has lived through the past, is still ticking in the present, and hopefully, will continue to do so in the future. And, oh, the things it has seen. The clock became a witness for the life and times of the Malkani family when it was acquired by them in 1945. Its time-keeping began in Karachi, Sindh (present-day Pakistan) where Arjun Malkani, or Nanaji as I knew him, lived. He was the fifth among ten siblings, born to Ramchand and Sita Malkani in Hyderabad in 1921, but this was two decades before the clock’s time.

When the clock found its way into the Malkani household, Nanaji was a young man, all set to become an advocate. However, its stay in what is now Pakistan was short—for the lives of the members of the Malkani household, their neighbours, their friends, and hundreds of thousands of others were about to go through unthinkable upheaval and turmoil.

The freedom struggle was gaining strength, adrenaline and patriotism were rushing through the veins of all Indians. The days were becoming increasingly violent as people demanded freedom. The Malkani brothers too did their bit to help, all of them working in secrecy, their missions not even revealed to their blood. On 3rd June 1947, the clock stood witness to a historic decision that changed the lives of millions. In a little over two months, British India would be divided into two. And the Malkanis began to hear that the home that had been theirs for decades, their ancestral land, was not going to be theirs anymore. All of a sudden, they were going to stop belonging.

There was an initial sense of disbelief. Nanaji’s mother, Amma, said in Sindhi,  ‘Asaanjha Musalmaan bhau-bhen asaankhe painjho samjhanda aahin. Asaan hunankhe ghanai dafaa madad kai aahe aen waqt te, hoo ba asaankhe madad kanda, Our Muslim brothers and sisters consider us family, we have helped them many times and when the time comes, they’ll help us.’ But the older siblings decided it wasn’t something they could take a chance with. And so Amma and the younger siblings were shipped off to Jodhpur, in present-day India, where Milu dada, the eldest of the family, worked as a train driver. They carried as many of their belongings as they could—an entire train bogie full. This was where the clock separated from Nanaji, but only for a brief while.

Come August, things worsened and continued to do so in the following months. Amma had been proven wrong—it didn’t matter that their Muslim neighbours loved them still; the land had disowned them, and their home was going to be destroyed. In late 1947, Nanaji and his younger brother, Nari (shortened from Narayan), were the last of the Malkani siblings to make their way to Jodhpur. The rest of the family had organised safe passage for them. However, things did not go as planned. The Sind Mail, which connected Karachi and Bombay, was derailed before they could reach their destination. And the two brothers were left stranded with many others somewhere in Rajasthan, unable to make contact with their family. They found shelter with some distant relatives in Bombay for the next two months, desperately trying to contact Jodhpur. Finally, they managed to locate their eldest brother through the railway offices and reach what would now be their new home. And finally, Nanaji found his way back to the clock—the clock that now belonged in new India.

Did the clock remember the exact moment it crossed the imaginary border where Pakistan suddenly became India? Perhaps.

With the family reunited at Jodhpur, the Malkanis considered themselves lucky—luckier than those who still had no contact with their loved ones, and a lot luckier than many others who had known unimaginable terrors on the journey and not made it at all. Milu dada told tales of the violence that the neighbours inflicted on each other, often he drove back bogeys full of blood and bodies. One particularly horrifying journey he recounted, which has been passed down several generations now, was just after the festival of Raksha Bandhan, towards the end of August. The train full of Hindus he was driving eastward came under attack at the Mirpur Khas junction in Sindh. Milu dada, desperate to get the passengers to medical aid, ripped off the rakhis that his sisters had tied from his wrist, which would have betrayed his religion. He drove on through what was now Pakistan, hoping that help would be provided with the claim that a “Muslim” train needed assistance.

Did trains have a religion too?

Eventually, the siblings all went about their own ways and started their lives once again. Nanaji found his way to Adipur, a town in Kutch in 1958—right next to Gandhidham that had been given to the Sindhi refugees from Pakistan. And somehow, by sheer chance, the clock also found its way to his house. The fifth-born Malkani inherited the timepiece that had lived in two periods—before Partition and after Partition, in two nations—Pakistan and India.

He managed to complete his education and was now an advocate. In 1963, advocate Arjun Malkani fulfilled Amma’s last wish—he got married. And two years later, Varsha Malkani, my mother, was born. For years, the clock lived in the dusty old town of Adipur, perched upon a shelf inside a cabinet in the living room, right next to a set of Matryoshka dolls. Even after Nanaji was gone, the clock—silent now, as it hadn’t been wound in a long, long time—stayed. And it continued to stay, a silent observer, until my mother retrieved it and brought it to her home in Nagpur. Varsha Malkani, was now Varsha Mansukhani, after she married my father, Sanjay Mansukhani . In August 1993, I was born. And years later, when the clock found its way back to my childhood home, it was discovered by my sister, Kashvi, and I.

It is a beautiful wooden piece, Swiss-made, by a company called Favre Leuba. The words ‘8-day’ are inscribed on its dial. For as long as my mother remembers, it has had a crack running down its middle, one that partitions it into two. The glass had probably been replaced, but the crack across its wooden body remains. And it fascinated me to no end—that this clock that had lived in the past, had a crack almost symbolic of the crack across earth that rewrote its owner’s life.

Did it face this damage on the journey that so many others did not complete? Perhaps.

The 8-day clock now sits in our living room, mostly silent as we forget to wind it every week, carefully preserved behind glass by our mother. It mostly remains forgotten, but every time I visit my childhood home, I am reminded of one of the first storytellers I knew—Nanaji—and all his stories. He loved stories, and had much to say about my favourite topic, the Great Partition. I listened and probed and asked for more details than he could allow my young ears to possibly hear, and I painted images of the unimaginable sorrows they had faced in my young head. Nanaji’s family had been prepared for the worst and through an arduous journey, they managed to bring back most of their belongings and start life afresh. All the same, they ran away, forced to leave their home behind.

Unlike my Nanaji, others, I found, did not like to recount these incidents. Many refugees from Sindh did not dwell on nostalgia, for the sentiments of feeling homeless landless can be overwhelming. While those from Punjab and Bengal were given new land in new India, the Sindhis who left their Sindh behind remained refugees in a way, with no place to call our own. And years later, the sentiments of not belonging and the second-hand loss of a home that I never knew, still linger with me. As do all the precious moments that the clock had witnessed—joyful, gruesome, horrifying, peaceful, as they might have been.

The things my grandfather’s clock has seen. 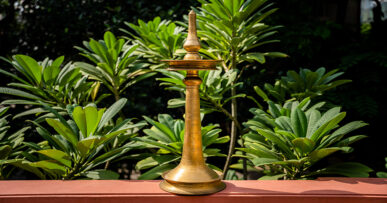