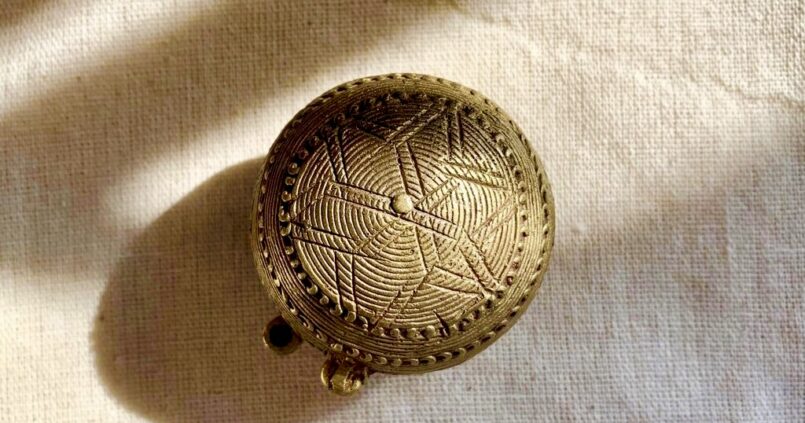 Of the myriad memories I have of my grandmother, there are a few that remain as vivid as a freshly painted picture. My grandmother, Kalabati Devi, seldom smiled. She was not as softhearted or indulgent as women of her times usually were. Widowed at a young age, all the legacy she was left behind by my landowner grandfather was their six little children—the eldest, my father, a little over ten; my two aunts and two uncles; and, my youngest uncle still in her womb — and acres of farmland. Fate and circumstances made her a formidable woman, or perhaps she had always been the kind who rationed her emotions.

When I was a little girl, I would often find her negotiating with farmers and beady-eyed shareholders during hot summer afternoons, keeping a count of the sacks of harvest on the dusty verandah. Behind this steely demeanor, she quietly enjoyed a weakness or two, mainly fish and paan. No weekend would go by when she would not buy the freshest catch from the village pond and butcher it herself into painstakingly neat cuts which would then be coated with a pungent paste of coarsely-ground mustard and turmeric and shallow fried till golden. I can vividly recall her countenance as she would sit hunched on the wooden board of a curved chopping blade, her eyebrows knotted in a deep, meditative concentration. It was a Sunday ritual I loved to watch and partake in. Later, after a hearty lunch of rice and fish curry, she would give me a one-rupee coin from her little brass coin box that she kept tied in the secured folds of her crisp, white cotton sari—it was my reward for not interfering in her task. This beautiful box, since then, had often fascinated me.

Designed from intricate patterns of filigreed brass, the coin box or karata, as it is called in Odia, is a fine craftsmanship of antique dhokra work—an age-old art that finds its home amongst the Damar tribe of Odisha and West Bengal. Traditional metalsmiths for generations, the Damars use the low-wax casting technique to create figurines and utility objects that embody primitive style and tribal motifs from their everyday life. The karata served the purpose of a daily-use wallet for women back in my grandmother’s times. About the size of a regular plum, the box measures 4 cms in length and 3 cms in breadth approximately. Like an evenly cut fruit in the middle, it opens into two neat halves of hollow insides that were originally coated with clay but over the years, have been lined with thick, glossy magazine paper to give it the durability it needed to hold coins. Despite being more than eight decades old, except for some perforation along the rim, the metalwork is still sturdy and functional. Its colour of beaten gold intact, one can still get the overpowering smell of musty, antiquated metal off its surface.

Born in 1924, near Angul, now a major industrial town in Central Odisha, my grandmother was a great storyteller and would often narrate mesmerizing accounts of her adolescence that was lived amidst lush green, tiger-infested jungles by the banks of the river Mahanadi. She would recall how Gandhiji, on his padyatra to Puri in 1934, had made a pitstop at our hometown and how all the men and women from the village had marched to the district bungalow to catch a glimpse of the great man. Gradually, her memory would shift to her wedding day when she would reminisce the details of her enviable dowry. “The brassware in particular was the talk of the village for days after the wedding”, she would claim, her otherwise stoic face beaming with a mellow pride.

Dating back to 1939, this coin box was a part of my grandmother’s wedding trousseau and of the two or three boxes she was given, this one survived the stretch of time and the tides of displacement. In case of a fall or dent, my grandmother would lose no time in taking it to the neighbourhood metalsmith for a quick fix. Sometimes she would ask me to accompany her, an excursion that I would enjoy every morsel of. Back then, I did not understand the toils and precision of craftsmanship that went into the making of such a precious object. Neither did I understand my grandmother’s sentimentality behind preserving it. But I do remember how visibly uneasy she would be if anyone else so much as touched it. Perhaps it was the only material remnant of simpler times she possessed, when she was not yet riddled with a life of hardship.

Over the years, like most things of childhood and in the haste of growing up and building a world of my own, the karata too was gradually forgotten. What remained was a sense of blurry nostalgia surrounding it. That is, until I went home last year. Quite miraculously, after eighteen years of my grandmother’s death and an era of oblivion, the box found me. My youngest aunt gave it to me, saying, “You are the only one after Ma who valued this box so much. Keep it, this belongs with you.” What could I say, except that my heart was full and much more. And so, the box travelled with me all the way to London and remained there for a while before we moved back to Bangalore earlier this year. It was a journey of more than one kind and maybe for a flicker of a second, I could see my grandmother smiling her reserved, reluctant smile.