My grandparents’ ‘Rubaiyat of Omar Khayyam’ 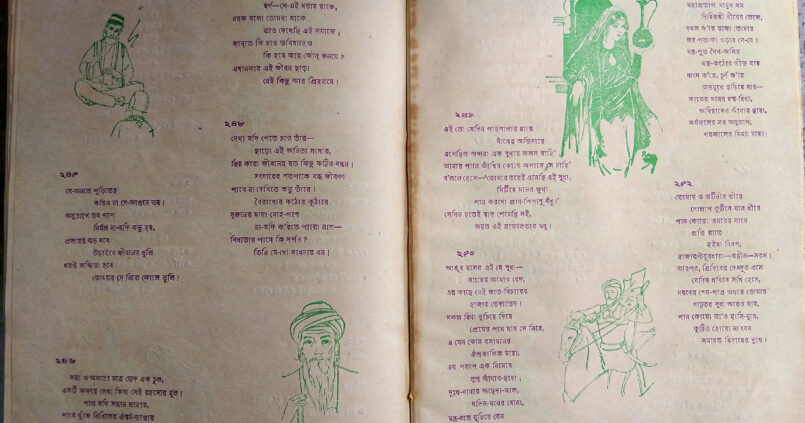 ‘Back in our time, gifting books to the bride and groom on their wedding was very common,’ my grandmother said. As she said this, I thought back to the weddings we had attended in the past few years. Clothes, cash, cutlery – this alliteration summarized the spectrum of wedding gift possibilities. Perhaps it wasn’t just the passing of time but also the finality of a lost tradition that left its footprints in the worn-out pages of the “Rubaiyat of Omar Khayyam”, presented to my grandparents on their wedding in the year 1966.

Omar Khayyam composed this collection of four-line stanza poems, or rubai, as they are known in Farsi, sometime between the late eleventh century to early twelfth century, before he died in 1131. History further made itself known in a personal and intimate way as I read the Bengali inscription on the first page – “To Priti and Dilip Bandopadhyay – on their wedding, 6.6.66”.

I discovered it the way you’re supposed to discover treasures – buried underneath decades of dust. It was tucked deep into the bookshelf, a time-telling machine, measuring its units by an ever growing pile of books. But what made this particular book one-of-a-kind discovery was the fact that it had been fully translated to Bengali by poet Narendra Dev, father of the beloved Bengali author Nabaneeta Dev Sen. Each of the four-line quatrains have been translated from Persian to Bengali, keeping intact the rhyme scheme and essence of the verses. Sometimes, the rich imagery of moonlit minars and Sultani palaces, which are usually meant to conjure flavours of Sufism and Urdu shayaris, are so well contained in the translations, that it makes me forget that I am reading the verses in Bengali.  At other times, the universality of love, pain and suffering in the lines makes me forget that I am reading about a time, place and in a language originally so far from my own.

‘June 4th,’ my grandmother reminisced her wedding day, ‘a day on which it rained heavily’ – as she slowly glued back the book’s dwindling bindings with her own fingers, rebuilding history. Bengali weddings are celebrated in two halves – the second day, called Bou-Bhaat, separated by one day. The inscription by my grandparents’ friend bears the date of the second day – June 6th, 1966.

Other than the vivid imagery evoked by the words themselves, the book is full of vibrant illustrations by Purnajyoti Bhattacharya. There are full-page paintings of scenes inspired by the poems. Most of the recurring images have an aged man in a flowing shalwar and cummerbund, locked in a romantic sojourn with a young woman dressed equally lavishly. In one, they are leaning into each other under a tree. In another, the man listens intently as the woman plucks the strings of a rabab, a bowl full of fruit and goblets of wine before them. The other paintings include the poet gesturing to rain-clouds. Much of the verses and paintings have brought together the night sky, with its moons and stars, and the landscape of human emotions changing from suffering to ecstasy, from rage to longing. This, I believe, speaks greatly of the nature of Omar Khayyam, who was both a poet and as astronomer.

In the illustration for the poem Bhor’er Pakhi (Bird of Dawn), the artist, probably recalling this link between poetry and astronomy, gorgeously painted glowing sequins on the people’s vests and veils, their clothes imitating the stars in the sky.

Even though the pages have weathered into their yellowed inevitability, the letters and sketches have retained their crisp timelessness. A total of three hundred and ten poems have been separated into different sections, titled Abhiyog (Accusation), Bidroop (Ridicule), Prem (Love), Saundarya (Beauty), and Dharma (Religion). Each page contains four poems with two small sketches, changing colours with the emotions of the stanzas. Sketches accompanying poems about the lover’s muse are in green, those about loss and yearning, a turquoise blue, expressions of religion and philosophy, in red.

Sometimes, when I fall asleep with the book in my arms, I inhale the aroma of its frayed edges. That one, particular time-travelling fragrance of old books that take me back to my school libraries and old book shops of College Street – probably the place from where my grandparents’ friend had purchased the book for only seven rupees. I wonder about the significance of the book pulling me back in time – if I’m transported into the past, am I not brought closer to the poet?

Speaking about making connections with the greats, Narendra Dev, with a whole-hearted message at the start of the book, dedicated it to Rabindranath Tagore. In his words, it was his attempt at delivering ‘“a few drops of nectar from Omar Khayyam’s ambrosia-palette’”, to Tagore, on the Bard of Bengal’s sixty-fifth birthday on 8th May 1926 – a day we Bengalis, each year, bookmark as Panchise Baishakh, and celebrate, with song and dance, as Rabindra Jayanti.

This book seemed to have unearthed a new memory, a new way to preserve my grandfather’s presence, whom we lost almost four years ago. The book’s front and back covers bear images of a woman’s gaze, a wine goblet and minars of an ornate palace. They capture the internal themes of the book as far as my grandparents’ wedding could have summarised their life ahead. Both are composed of finer verses, and require deeper introspection.