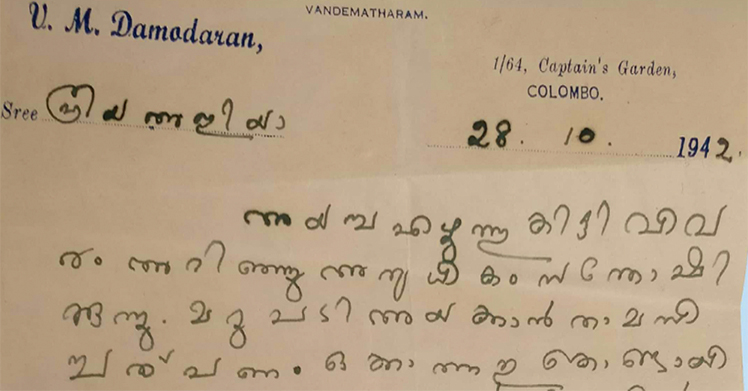 The plantations in Ceylon (now Sri Lanka) were cultivated by the British using Indian hands.  During the early 20th century, employment opportunities were abundant for south Indians. They were instrumental in the establishment of the tea, rubber, coffee and coconut  plantations in the  island nation.


My grandfather, or achachan, as he is fondly referred to by the family in Malayalam, joined this influx of migrant workers in his early twenties. He  stayed and worked in Ceylon for almost 7-8 years sending money back home to support his family. This letter, written on 28 October, 1942 details him asking his relatives in Thrissur, Kerala about the happenings and whereabouts of his  brethren. At that time, letters took over a week to reach his hometown and communication  was nowhere as frequent as in today’s day and age.

My nani (maternal grandmother) passed away recently and the entire family visited our native village in Thrissur for the final rites. It was a  rare occasion when all of us were present. My chechi-amma (mother’s sister) had safely preserved our family’s photographs for all these years and she showed them to us then. Wanting to make digital copies of them, I was rummaging through the pile and chanced upon this old letter. The four sheets  of paper were safely preserved in a transparent plastic folder.  The letter, written before achachan was married, speaks mainly of family matters and describes his life in erstwhile Ceylon. It is addressed to my grandfather’s brother-in- law’s elder brother who was an authority in the town  back home and a caretaker of the family.

The letter also highlights the struggles and hardship felt during the British rule. “Food is rationed and I receive 3 naazhi a week.” Naazhi is the smallest of the measuring vessels associated with the rice-paddy system  in Kerala. 1 Naazhi  is around 200 grams. He has also asked whether his brother has received the 55 rupiah money order he had sent to buy some land back home. Achachan was surviving on a meagre salary of 150 rupiah for 5 months and was requesting his elders to not send any new kids to work there. He specifically mentions “don’t send his relative Govindankutty as he himself  is surviving on only one meal a day”. The header contains his name, V.M. Damodaran and his contact address, 1/64 Captain’s Garden, Colombo. It also has ‘Vandematharam’ printed on it.

Around the time when Nehru was heralding an independent India with his Tryst with Destiny speech, my achachan was awaiting the return of his elder brother from Kuwait. It was very  common for the male members in the family to go abroad or to other states to earn a livelihood.  The two brothers would be meeting after a long time. Unfortunately, the ship from Iraq got delayed. As the final call for my grandfather’s ship to Ceylon was being announced, he decided against joining his  colleagues. He would rather have the warm embrace of his brother. This led to him quitting his  job at the plantation and staying back in Kerala.

Achachan brought up a family of nine children which included six daughters. The women of the family remember him as a person quite ahead of his time, as my grandfather was very insistent on getting  his daughters the best education and making them financially independent. I am referring to  the 1950s here when the social climate wasn’t exactly conducive to his thought process.  But thankfully, his strong work ethic passed on to his progeny and ensured they became doctor, engineers and  teachers.

An atheist and a Gandhian, who had his own set of morals and way of life, achachan wholeheartedly accepted an inter-faith marriage in his family. He paved the way for the future  generations and was always the bulwark of the family. Even at the ripe old age of 87, I remember him  tending to his paramb (field) and keeping things in order. Before the first rays of the sun hit the  field or the morning rooster welcomes the day, he would be on his feet carrying his kaikottu  (spade) to get to work. This is how he started his day, by offering prayers to the soil which  gave him his livelihood. His God resided in his paramb.

When I came across the letter it felt like I was holding a piece of history. A fragment from a bygone era, a time before any of the living members of  my family were even born. My cousins and I have made a concerted effort to make a digital copy of all the old photographs as I don’t  want them to be lost with the older generation. I want such pieces of history to get recorded somewhere and I hope this is just the beginning.