A story told with teacups 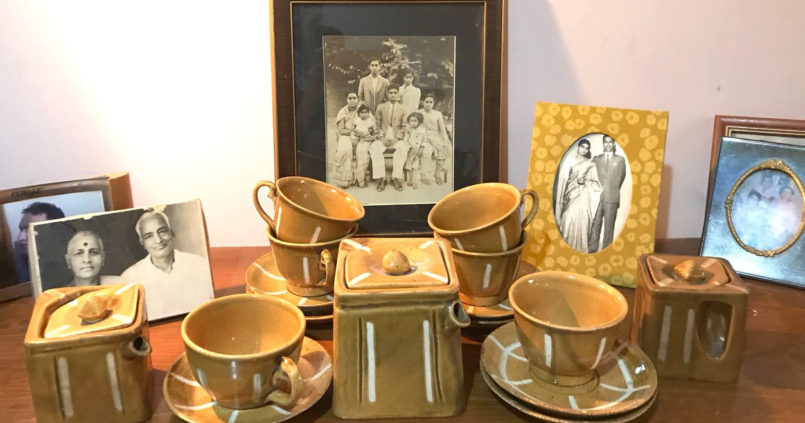 The act of drinking tea is such an everyday ritual in our country, that seldom do we pause to think about the vessels it is served in. But then there is one set of teacups and saucers, that has over the past few months, led my grandmother and I to ponder over its history, over several cups of chai.

This particular tea set belonged to my grandmother’s sister-in-law, Padma, known to the family as Paddi, who bought it from Banaras sometime in the 1950’s for 14 rupees. Perhaps it was made in Banaras, or elsewhere. One will never know, as there are no legible markings or etchings on it. Paddi, my grandmother fondly remembers, was a fun-loving, adventurous person, who would travel to distant corners of the country with her husband, who was employed with the Indian Railways. “They would travel everywhere in the railway saloon, which was a house on wheels, complete with bedrooms, a kitchen, living area and house help too! I remember, at the back of the saloon there was a window to view train tracks, as they disappeared into the distance behind us.”, she says. Paddi was known as Paddi ‘Perima‘, meaning ‘big mother’ (in Tamil), to her nieces and nephews.

“Paddi Perima was really fond of the tea set, and used it in her house in Hyderabad quite often. I grew to like it too. It’s so unusual! About 15 or 16 years ago, when she came to visit us here in Vadodara, she presented it to me”, beamed my grandmother, Revathi Shankar. “Do you know what the most unusual part about this set is?” she asks. “It has 8 cups, instead of the usual 6”,  she says with a joy only a connoisseur of fine crockery will know! The tea set, as was given to my nani, has 8 teacups and saucers, a milk pot, a sugar pot and a teapot, making it a 19-piece set.

The lightness of baked clay, the almost nonexistence of its delicate handles, the generous size of the cups itself and shallow indents with white glazing; all of these details have made me hold on to the teacup, long after the tea is poured and gone cold. The colour too, a deep ochre with specks of brown, isn’t uniform everywhere, hinting at the hands that must’ve crafted and glazed it. The ingenuity in the design of the pots, possibly belonging to the Art Deco style, with the handle carved out from the cube itself renders it almost timeless now, and definitely ahead of it’s time, back then. The only detail that prompts me to let go of the teacup is the ear of its handle, which hurts my finger when placed for too long at its narrow, sharp bend.

Generous servings of tea in the cups must’ve been accompanied with fresh biscuits and cakes from bakeries in Hyderabad, I imagine. Perhaps it has travelled many meandering miles, between Banaras and Hyderabad, safely aboard a railway saloon cabinet, and now treasured in my nani’s crockery collection in Vadodara.

Having never known Paddi Perima closely, I’m curious about her tastes and habits. Would she have bought the set from a roadside seller, or from a crockery shop in the lanes of Banaras? Was it the peculiar, cuboidal teapots and accessories that intrigued Paddi enough to buy and preserve them for so long? Was it the lightness of baked clay, or its form that must’ve caught her eye? Is this truly a unique set, or was it commonly used back then? I wonder.

As I pour my first cup of chai of the day, place it on the circular saucer, my mind’s eye flashes all the teacups and dishes I’ve gathered over the years. There is fashionable studio pottery that is brought out on special occasions. There is a set of miscellaneous cracked cups and chipped saucers borrowed from throwaway piles at craft-fairs. A pair of pristine indigo peppermint cups. Few painted tin cups found at the Friday flea market. A square saucer to go with a round ceramic soup mug. Or even a singular, patterned cup with a singular, patterned crack that seems to disappear with use.

There are all of these possible heirlooms to my (yet unborn) grand-nieces and nephews, for them to wonder and be curious about. But nothing quite like this tea set with 3 cuboid pots and 8 lighter-than-air teacups, however!