Not just a photograph 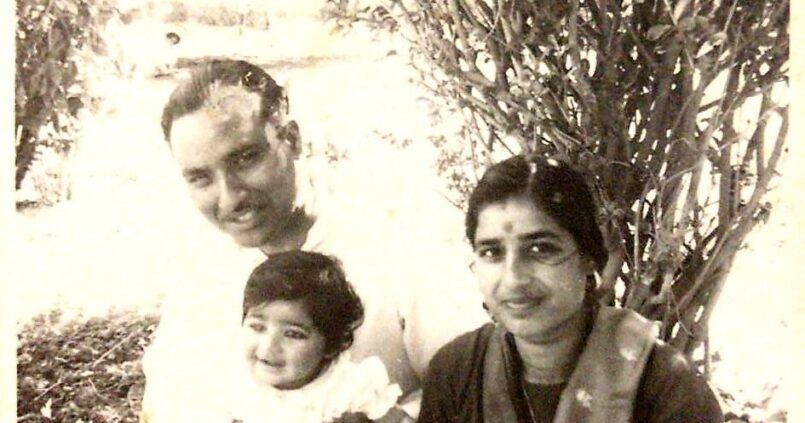 It has been a year since I last saw nanu. My daily trips to nanu’s (my maternal grandfather) place have come down to once in a few months. Each visit is spent looking through some old and dusty sepia toned pictures that take me back in time. It has become my favourite way to pass our time together, because even if for a short while, I get to be a part of his world. And in the process, memories engulf me. It is as if I am watching it all happen through the negatives of the pictures lying within the photo album. It was on one such visit that my hands landed on this black and white picture from somewhere around the 1960s.

I immediately took it to nani, my maternal grandmother, Mrs Uma Gupta, and asked her if she knows anything about it. She replied in an instant, “This is the photograph that had been sent to my family to discuss our marriage, shaadi ke liye aayi thi ye tasveer. Agli baar jab unhe jee-bhar ke dekha, to main Mrs. K.L Gupta bann chuki thi, the next time I saw him, I’d already become his wife! That day I felt that destiny had come to me in the form of this paper photograph to take me on the most beautiful journey, aisa laga ki maano taqdeer khud ye kaghaz ki tasveer banke mere pass aayi thi aur muje mere jivan ke sabse khoobsurat daurahe par le gayi.” They got married on 12 May, 1963 in Delhi.

That moment, the poetess in her held hands with a wife, whose world had been shaken to the core, ever since nana left. It made me realise that pictures often act as time machines. She was holding a faded photograph but living a crystal-clear memory. The human brain works in wondrous ways, and never ceases to amaze us. Of the infinite memories that we collect over time, it knows exactly which chord to strike; making us re-live the exact time we might have been longing for.

With the photograph in my hand, I felt a sudden sense of warmth as I went back to one cosy afternoon, sitting beside nana, cuddling him and pestering him for one more story. His gentle heart that never knew denial kept him going and this time the story started like “Mirpur me humara ghar hua karta tha, our house used to be in Mirpur”. That day, he took us both to his birthplace, Mirpur, in undivided India.

“We were happy there. I was born in 1934. Humare pitaji ka sone ka vyapaar hua karta tha, my family were gold merchants. One day, our father gave us all a 100 rupee note. ‘Kaam ayega, sambhal ke rakhna, take care of it, it will be useful one day’, he said. A week later, Hindustan was divided. India and Pakistan were created. “Log keh rahey the ki naya itehaas banega, a new history will be written, they said. Lekin maine socha, bacha hi kya hai ab kuch naya banane ko, but what was left to create history of?” ﻿

“We had to run for our lives. My mother and sister got separated from us and we later found them through the camps. My brother, five years younger to me, had fever that day and his body refused to run. Amidst the race for survival, looking back would have costed me the very same thing I was trying to save- my life. But my blood was as precious to me. Kya paa leta main, usko waha akela chodke…safar tai kar bhi leta to bhi zindagi to choot hi jaati, what would I gain in leaving him there. Even if I made the journey, life would have been left behind. So I held him on my shoulders and started running again. We flew to Delhi, where our elder brother O.P Gupta was already working. His wife had gone to Lahore to visit her maikaa (her parents’ home). She never returned.”

I now think, maybe through these little anecdotes, he tried visiting his home; A place that in a matter of seconds, became a foreign land. Maybe memories led him to where he belonged, crossing all borders, covering the distances that faith and religion had created.  Gently wiping away his tears, failing miserably at his attempt to hide them, he said, “I don’t know what kept us going that day. We had lost our past and didn’t even know that a future existed. Us din desh azad hua tha, the country became independent but I felt a new kind of binding take over me, kaafi bandhish mehsoos hui thi. I wanted to tell those that had divided us that you can separate the country, but can you separate a soul from its soil, hume alag kardogey, par uss mitti ka kya jo dono taraf ek si hai? Rishton me milaavat toh kardogey, par us khoon ko kaise badlogey jo sarhad ke dono paar ek sa hai?”
That moment, my heart was at home. Living his memory in my memory felt like living with him, in another time zone.

Raised in a family of four brothers, one sister and a widowed mother, nana made use of every opportunity that life offered. From graduating from Hindu college, Delhi University with a Masters in Mathematics to being the Deputy Commissioner for distance education and then the principal of Prince of Wales college in Jammu.

I was surrounded by these thoughts and a peculiar rustic fragrance of old photo paper. Aisa lag raha tha ki is khusboo ke saath maine kayi yaado ko in panno ke beech kaid kar liya tha. There is a certain sense of familiarity in the smell of old pictures. They fill you with the feeling of belongingness and evoke past incidents that stay with you for a long time. It is as impactful as the memory itself. This papery, rustic, gentle fragrance carried by the picture resonates with the aura of nana. It helps me keep his breeze, the smell of air around him, fresh in my mind. So, although this picture belongs to a time before I was born, it stays integral for it is of a person who had been this way over all these years. A coat, collared shirt paired with a tie and a pen in the pocket; all of this defines his personality and habit which he proudly carried with him till his last day.

Even when struggling in his last few days, he used to dream of maths, forget all his pain when given a pen and paper. I still remember him saying, “A teacher must always remain a student; never too old to learn new things.”
His legacy is so grand, that I felt the need to narrate a part of it. In him, I had my biggest cheerleader, friend, greatest guru and source of inspiration. He was the life sustaining us all, he was our life. Thinking about him, I wonder if years really matter. Because no amount of time can fade away his aura that still lights up our souls.

All these thoughts fill my heart like a huge ocean wave gushing towards its shore, leaving its traces all over. And I put the picture back into the album, gently humming to myself, “tere bina zindagi se koi, shikwa to nahi… tere bina zindagi bhi lekin, zindagi to nahi, zindagi nahi…”