Travels of a carpet: From a Persian otagh jolodasti to a Georgian living room 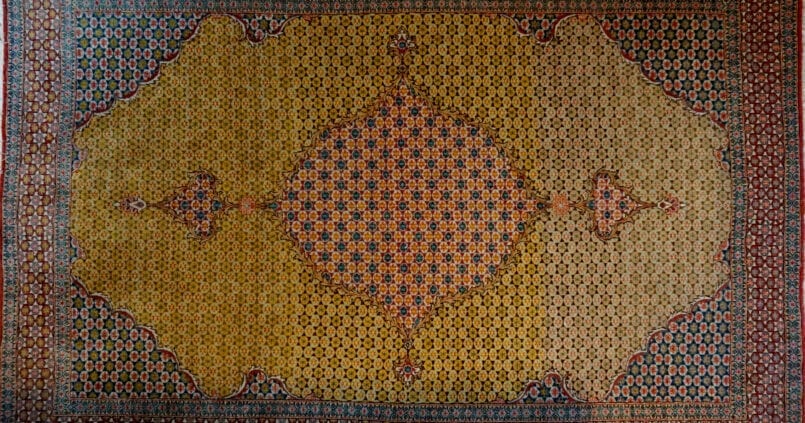 I like to imagine possessions, particularly aged ones, as having a soul or at least bearing imprints of the souls that have had meaningful contact with them. It’s fun to envision all that these objects have seen or heard over the years.

I’ve always been attached to things and history, perhaps because my own family’s is very fractured. Things denote some form of concreteness, presence, permanence, all things that I seek. My father’s family are Muhajirs, Muslim refugees who moved from present day India to settle in Pakistan, after the Partition of India in 1947. They brought nothing with them except their title of Chaudhary and stories of their family haveli built on legends. All was left behind and the family started afresh. This was a cycle that repeated itself when my father left Pakistan to move to the UK so everything that surrounded me had no tangible history to it.

My husband on the other hand harks from a family where both his Iranian father and French mother had family homes and heirlooms that went back more than a hundred years. Some of these wonderful objects have made their way in to my family home, treasured for their beauty, value and of course the memories attached to them. Keeping these material objects serve as a loving reminder of the people who have passed before them and continue a link between their past and present.

One such thing is a beautiful Persian carpet, which started its life in Qom where my husband’s grandparents, Parvin Keyhani and Hossein Djavanshir, bought it while on holiday more than 50 years ago. This city in Iran is known to be famous for its saints and its carpets. Qom has a relatively new place in the history of carpet weaving as ateliers sprung up in the early 19th century but quickly established a reputation of some of the finest, and consequently expensive silk and wool carpets in the world. The carpets often represented a garden, and they chose a beautiful Herati pattern, ubiquitous for the repetitive, almost geometric, floral motifs. In the centre is a medallion, a tradition harking back to early 15th century Persian Manuscript covers.  The medallion has four flowers coming off at each corner topped with a palm tree motif.  Back in Tehran, the carpet occupied a place of pride in the otagh jolodasti or living room (as opposed to the mehmaan khane or formal salon) of their home.

My husband’s father, Firouzan and his French wife, Madeleine lived nearby and one day while sipping tea with her father-in-law, Madeleine commented on how beautiful the carpet was. The next day it was delivered to her home by her brother-in-law. There is a saying in Iran when someone compliments something in your home they say ‘pishkesh’, which means ‘its yours’, and well in this instance it literally was! That carpet travelled with Madeleine and Firo who left Iran for France and stayed with them in the west and then north of the country.

It seems the carpet’s travels where not over as in a similar turn of events my in-laws gifted the carpet to my husband and I and it now lives in Edinburgh with us. Quite a journey indeed! It is laid out in our otagh jolodasti and is trampled on by my two sons daily. It makes me happy to think that a carpet that travelled from Iran to Scotland via France is being walked on by the fourth generation of Djavanshirs. I hope it will carry on being used in the future and will have weaved within it the stories of the family and the lands it has lived in.