Ode to a love story 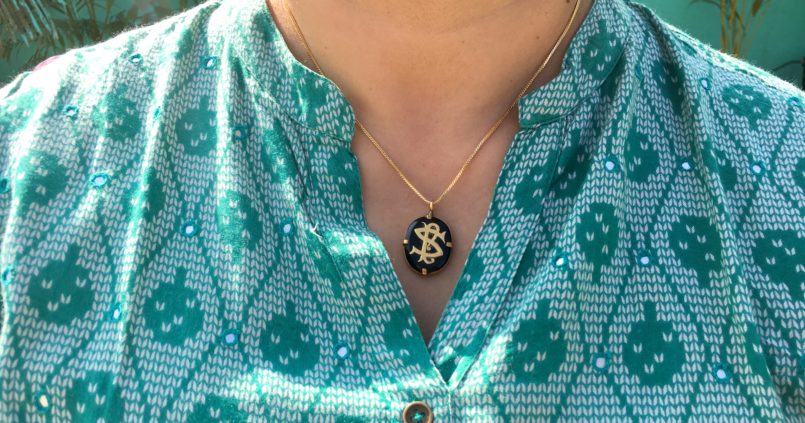 Among the many heirlooms that I have inherited from my paternal grandparents, this pendant remains closest to my heart. To most people it may appear to be a tiny and ordinary piece of jewellery but for me it is a reminder of an eternal love story that made me believe in love at a very young age.

Set in black jade, the pendant measures 35 mm by 19 mm and has the initials of my grandparents inscribed on it in gold, intervowen within one another. S for Suraksha and P for Prem – and this is exactly what defined their relationship – the combined protection and companionship they felt toward one another. My grandfather got this handcrafted at Kanjimal Jewllers [while they were still in Chandni Chowk]  sometime in the mid-1950s and gifted this to my grandmother on one of their early wedding anniversaries.

The pendant also serves to be the first memento that ignited my interest in the stories of Partition.  As a child, whenever I would see my grandmother wearing this pendant, I’d insist that she tell me her ‘story’ and how she met my grandfather. She would tell me that she was born in Quetta in 1932. While she did not have any memories of Quetta, she would always remember that a devastating earthquake that took place in 1935, causing her family to move to Sialkot soon after. She would reminisce about the few years spent in Sialkot, and then with joy, narrate her move to  Lahore, where she spent most of her childhood and early teenage.

On being asked how she came to India, she would say ‘hum naseeb waale the jo hume utni maar-kaatai nahi dekhni padi’ (we were lucky that we did not have to witness a lot of blood shed). A little before the riots of 1947, her family had come to Delhi to meet her maternal grandmother. They received a letter from their neighbour in Lahore telling them not to return as most likely they will be killed in the communal upheavel, during their journey back. They were also told that her paternal grandmother had died during the riots and that the neighbours had performed the last rights for her.  The family immediately made the decision not to return, but my grandmother missed her Lahore city dearly. Even till her last days in 2010, she would fondly say ‘mujhe aaj Lahore le chalo main tumhe poora sheher ghooma dungi’ (If you take me to Lahore even today, I would be able to show you the entire city). I would hear this story endless times as a child and I’d image, to the last detail, what it might be like to visit the Garden City across the border one day. Till today, visiting Lahore remains one of my dearest wishes.

My favourite part of her story would be when she met my grandfather in Delhi. Their love story began in Delhi University. My grandmother was in her first year of Miranda House and my grandfather was a leader of the Student Union at that time. My grandmother would tell me that he had come to ask for votes in her college when they first met. What happened next was a fairy-tale romance that is difficult to find in the modern times of today.

It’s a story from the early 1950s. My paternal family had been living in Chandni-Chowk for over five generations at that time. Such families would like to call themselves ‘asli Dilli-wale’ in the light of the recent mass-migration of ‘refugees’ from Pakistan. So a 6 feet tall, fair and handsome boy of an ‘asli Dilli wali’ family wanting to marry a less than 5 feet, dark, Punjabi refugee girl from Pakistan was somewhat of an unacceptable proposition.

Every time my grandparents told me something about their love story, it made me think that they were a couple far ahead of their time – both in terms of their thoughts and actions. At a time when affection between an unmarried couple was only seen in movies, my grandfather would have my grandmother sit at the front of his bicycle and ride around the streets of Old Delhi. Once my grandfather’s elder sister saw them on his bicycle and that’s when they were caught. As far as I remember, they always called each other “Darling” and nothing else, being probably the most romantic couple I have known. The other thing they both loved was going for dates in Connaught Place. Wenger’s, they said, was their favourite spot. So much so that they also held their wedding reception at the infamous Wenger’s, which at the time was two storied and had a banquet hall!

My grandmother would tell me that there were some strong reservations regarding their marriage at my grandfather’s side of the family. Even though these reservations faded away after a while, she would still receive some passive criticism regarding her skin tone, height, and the fact that she was a refugee. Once her mother-in-law severely objected to her wearing salwar-kameez in the house and refused to speak to her until she started wearing a saree. That’s when my grandmother learnt how to tie a saree and wore only that till her last days. Recalling such incidents in her old age, she would always laugh and tell us how she did not mind any of this because she had my grandfather’s support. Thinking of all this as an adult, I now realise how perseverant and courageous my grandmother was. I also wonder if it was required of all refugees to show such courage in order to start a new life at a new land.

I remember this pendant as a special piece of jewellery my grandmother would always keep safely – wrapped in cotton and packed in an envelope. She would refrain from wearing it every day, fearing that it may lose its shine. I have always thought of this pendant as the perfect example of how inanimate objects can carry years of love and memories within them. Whenever she would wear it or show it to me, she would of course tell me the lovely story behind it, but would also casually mention ‘this will one day be yours’…and that’s how it has come to me.

My grandfather died of a heart-attack in 2007 and my grandmother lost her mental balance right after. She passed away in 2010. At a time when the concept of love and marriage has become so malleable and unsure, it warms my heart to just look at this pendant – S and P, entwined within one another – and remember my grandparents, whose bond was unshakeable, even by the tides of time. 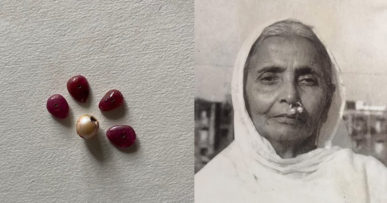