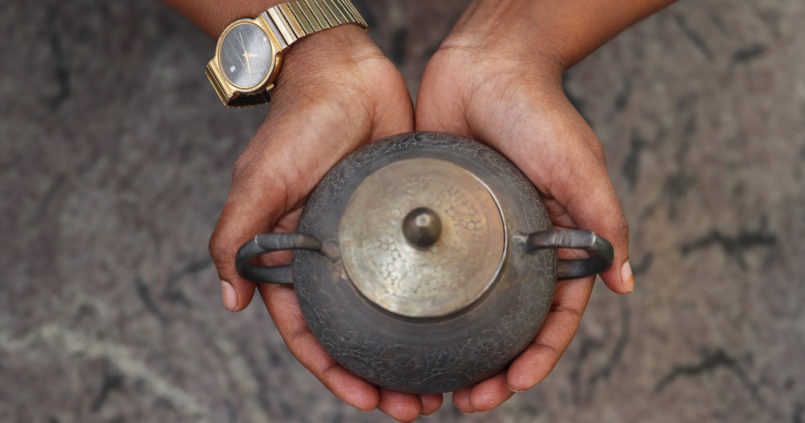 I have a faded memory of getting out of a train on an early winter morning, around 5 am. I must have been 8 years old, layered in various sweaters and jackets. My sister was about 5 and my brother was 2 years old. Our parents held us in one hand and our luggage in the other. We got on a rickshaw from the station to get to my father’s childhood home where now my grandmother lived with my uncles. It was in this kothi, a haveli like house in Bathinda, Punjab that my father, Subhash Goyal was born on 27 February, 1968.

When we were kids, the house seemed very large to us, probably because we were tiny. Houses in smaller towns were usually larger in construction than city homes. My sister and I invented many games around the many doors and windows in the big house. While the elders would usually be talking, we passed time playing games with the other kids in the street. Breakfast usually included poori and aloo from a vendor in the main bazaar.

I visited Bathinda last year, almost after a gap of eight years. The city now has a mall and some restaurants. My uncles have moved to new modern homes. My cousins have moved out to bigger cities for education. But my perspective had changed. The old charming house we lived in two decades ago fascinated me more than the rest of the city. The design of the doors, windows and facades from the 90’s was something I wanted to preserve. It is on this trip that I found some family belongings that were around forty years old in an old trunk.

Both these objects can be traced to my father and belonged to him. My father lost his father (my grandfather) at a very young age, when he was only 16 years old. He didn’t end up completing his education and got married when he was only 22 years! Before I turned one, my father decided to move to a bigger city as he always wanted to make it big in life and start something of his own. With one trunk of personal belongings, a wife and a child he moved to Delhi in 1991. Initially, we lived in a small house which was also my dad’s office makeshift workshop. A couple of years of hard work and passion, we moved to a bigger house when my sister was born. Both my sister and I were given the opportunity to study in the best institutions. My father has worked incredibly hard to expand the family business. Today, my brother who is 22 years old (the same age my father started the business) has also joined him.

When my father was born, his maternal uncle gifted my grandmother a tea set on the occasion of the birth of her eldest son. Even though the gift was not for the newly born, my father fondly tells us how personal gifts were rare. Back in the day, objects that could be household assets, like this silver tea set, were very common.

The tea set, bought from a local silver shop in Bathinda’s Dhobi Bazaar, is made of silver and there are three pieces for milk, sugar and tea. The silver has now oxidised and the set is now almost black in colour. It has been more than fifty years after all! The pieces are round, each with handles on the side and beautifully carved in an intricate floral design. The touch of the metal feels cool and the engraved floral pattern makes the pieces quite textured. Since the set was kept was in storage for several years, it smells of an old storeroom. A smell of dust mixed with metal.

The kettle is 4 inches tall and 8 inches wide. The milk and sugar pots are 3 inches tall and 4.5 inches wide. There are no scratches or marks on the set and it is very interesting that the insides are shining silver still. The lid of the kettle has come off from the joint, but it still sits well on top. It will have to be removed if one were to use it to serve.

Many years later ( in 2008) when I visited his old house to visit my grandmother, I asked for all the vintage objects that they were not using and brought them back to preserve them. In our house, no one really would value the old, nor find it charming, but I immediately fell in love with this. My father still laughs at my obsession with these old things, but for me, it’s a little bit of preserving the lost past of Punjab and my family.

The watch is made of stainless steel and is a yellow gold with a round dial. The strap is 9 inches long and less than an inch wide. The dial says ‘Titan Royal’ where the two gold hands rotate and on the back- waterproof, stainless steel is engraved. I remember when I first got this watch from my father about a decade ago, it used to smell of old spice since that is what my father used back in the day. The watch was kept in one of his coat pockets. It doesn’t have the old spice anymore. The gold sheen has faded quite a bit and there are scratches on the dial.

My father always wanted a watch. It was one of those things for him that was a benchmark almost of success. He started to work early in his life but never saved too much for himself. But a year before he got married and on his 21st birthday, he went to Singapore with his friends. That was quite a big deal, almost an accomplishment and he bought this watch to mark that occasion. He wouldn’t wear it daily, but would save it for important occasions. On his wedding day, he wore a white and gold sherwani with this watch. He says after that many watches happened, watches that were more modern and fashionable, but he never had the heart to give this one away. It was his first real expensive possession. I borrowed it from him around 10 years ago when I moved abroad and wanted to wear vintage. But I haven’t actually worn it. The strap is loose for me but I don’t want to alter the watch in any way so I haven’t got it adjusted. My relationship with my father is definitely a deep one and I am definitely the most connected to him emotionally. However our relationship is of a few words, we hardly express our emotions.

No one else in my family valued these old objects. They were just lying in storage in our family home in Punjab. I have always found vintage objects charming and I am curious about material culture. For me, things I hear about the lost past are stories, but these objects make these stories ‘real’. Since I never met my grandfather, he is almost like a fictional character for me. These old objects and photographs help me feel closer to him. At present, we have rented out the kothi to a family, and sometimes it breaks my heart to think that my uncles might renovate it etc. I think if it were in my hands, I would keep it just like the way it is. I have memories of my parents holding me in certain rooms of that house when I was only a few months old and a memory of my mum making chai in that tiny kitchen and to imagine anything changing is like losing these vivid memories.

The watch is kept safely in a cotton pouch in my jewellery box., while the tea set sits in my study where I store all my vintage objects, craft collectibles, and photos. Alas, it’s too pretty to be used!