Ode to my grandfather’s ancestry 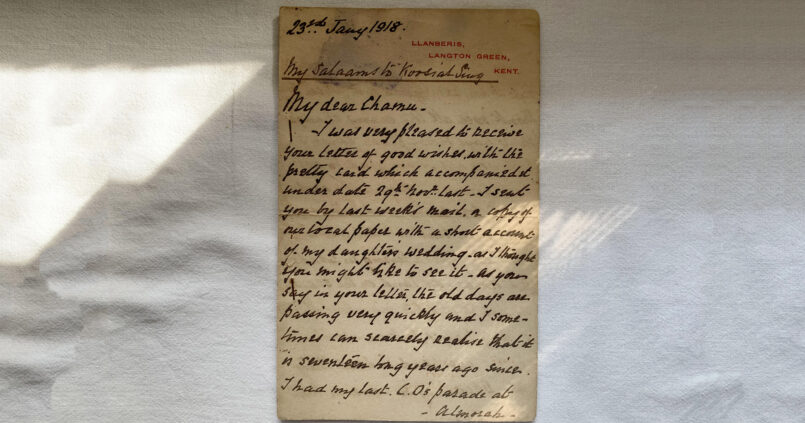 TEXT AND PHOTOGRAPHS BY UNNATI MEHTA

I have vivid memories of my maternal grandfather. I remember him mostly sitting beside a harmonium under a yellow light, reading a worn-out Agatha Christie book. He was an avid reader and a collector of many things. My brother has inherited his habit of reading, and I have inherited the role of being a collector. In an old box are some treasures that once belonged to him.

Since I was little, I have seen photographs of people I don’t really recognize, adorning prime locations on the walls of our home. One particular photograph in a rugged, dusty old frame is of a man standing tall with ranks on his shoulders and a stern look. My nani tells me “yeh mere sasur aur tumhare par nanu hai. Yeh bhaut bade captain the angrezo ke time par” This is her father-in-law and my great grandfather, who was a captain during the British Raj. There is a sense of pride in her voice, and though as a seven year old, I couldn’t understand what was so great about being a captain during the Raj, I indulged her all the same.

I look closely at the photograph, and don’t fail to notice his height. She tells me that he was 7feet tall and special chairs were made for him, she tells me tales of his valour and for most of my childhood, this is all I knew of my great-grandfather. Until recently that is, when I had a chance encounter with my grandfather’s box of documents and family history. I am twenty-two years old with a bare minimum knowledge of the history of the British Raj, and yet I am still able to comprehend the gravity of these heirlooms.  For the first time it is not hearsay stories of valour about my ancestors, but rather something tangible and physical; a memoir preserved through decades by several generations.

The first thing I discover in the box is a record of Jagir. It was bestowed on the occasion of the Prince of Wales’ visit to India in the year 1905, a Jagir in the district of Almora of value 600 rupee per annum from 21-12-1905. In seconds I am taken back to a history lesson in grade 9, when I would have first read this word. Only now, is its relevance fully understood. A jagir given to my great-grandfather! For once, I felt some kind of royalty.

In an emotional rush, I dive into the treasure. Both my great-great-grandfather and great-grandfather served in the Indian Army during the British Raj, in the 1/3rd The Queen Alexandra’s Own Gurkha Rifles regiment. Both were recipients of the Indian Order Of Merit. The oldest of the record dates back to 2nd July 1873 which is an extract from the Regiment Order by Lieutenant Colonel, A. Paterson Commanding of the 1/3rd Gurkhas, Almora. It gives a brief account of my great-great grandfather, Subedar Major Pursiram Burathoki’s military service:

“…a long and honourable service in it of 48 years placing on record the very high character he has always borne since he entered the service in 1825. The Subedar Major was present with the regiment at the siege and capture of Delhi where he was wounded and received the Order of Merit for gallant conduct in the field. He also did good service in Bhootan. In 1861 he was appointed Subedar Major the 1st Regiment ever had”

These are among the only few records left of my great-great grandfather, through which we revive fond memories of him.

Other records belong mostly to my great grandfather- Honorary Captain Chamu Singh, who served in the Afghan Campaign (1870-80), the march to Kandha and first occupation Khelat-I-Gilzal, the action of Ahmad Khel and Urzu (1880), the Upper Burmah Campaign (1886-87), the Lushai Expeditionary Force (1888-89), the Tirah Campaign (1897-98), and in Waziristan (1901-02). There are certificates, photos, official orders and charts, and my favorite – letters between two friends talking about the uncanny appearance of aeroplanes in the sky, the war and about an atmosphere of unrest in India starting in the early 1900s. But the most important among these records is the commissioning parchment of him as Jemadar in Her Majesty’s Indian Army under the seal of Government of India dated 21st May 1886.

A testimonial crafted with true admiration from the heart for one’s subordinate shows the spirit of camaraderie in its truest sense, now seldom seen in contemporary day. One written for Subedar Major Chamu Singh Burathoki by his then commanding officer Colonel E.R Bishop (1/3rd Gurkha Rifle) on his last day of service under his command, dated 19th January 1892 read as follows:

“…this is the last service I am likely to be called on to perform for this good and brave soldier in calling to memory and briefly recording my sense of the excellent service he has rendered to the government and I wish him heartily a long and happy pension period.”

As mentioned earlier, my favourite and most treasured record are the letters. In my reading of the letters between my great grandfather, Chamu Singh and Col Charles Sulley [or Pulley, the letters are difficult to discern], I gather a very strong friendship, having once been stationed together, now across oceans fighting different wars. In one of earliest letters dated 19th December 1914, the Englishman signs of by saying “every kind thought from your old C.O. Always your friend. Charles Sulley [Pulley]”

Their first interaction was around 1875, when as a young commissioned officer Charles,1/3rd The Queen Alexandra’s Own Gurkha Rifles, landed up at the Delhi Camp. A mention of this beginnings can be found in the letter dated 23rd January 1918

“. . .How I wish I could find myself back in those beautiful Himalayas that lovely ride into Naini (nainital) and have a chat with some of you, old pensioner whom I have known since 1875, thirty-nine long years ago when I joined the regiment at the Delhi Camp and saw for the first: a Gurkha. I can so well remember Colonel Paterson, Capt. Monay, Captain E.D Smith, Captain Gregory or rather Major and Dr Govaw with his long beard and old Tej Bahadur standing about among the tents, as I drove upon a “ticca gharry” on a cold December day nearly forty years ago. Well it is past and a very few years you and I Chamu, will be gone. I hope not forgotten”

They talked about everyday things, sending regards to mutual friends and sometimes discussing contemporary issues, ongoing military campaigns, World War I and the nationalist sentiment gaining momentum in the early 1900s. Sometimes, there is mention of family,

“. .. I am glad to get such good news of yourself and the suberdarni and to know that your sons are doing so well. We are indeed living in wonderful times-on land, on the sea and under it and the air above.”

In one letter dated 20th February 1922, with the onset of Gandhian period and the increasing momentum of nationalist movement in India, Charles writes

“…In my opinion the West will never understand the East, oil and water can never mix. And there must and ever will be a gulf between the Europeans and the Asiatics. It is impossible for the Europeans to be ever so clever to divine what is passing through a natives mind and you know better than I do how very little of the inner life of your countrymen we English really know. I was going to say “care to know”. The distinction of caste religion, habits and customs, language and surrounding are indeed foreign and must I think ever remains so to the average English men.”

Charles seems like a terrific friend one would want to converse about everyday life with. They wrote to each other on regular basis, sharing anecdotes, newspaper clipping, photos and a heartfelt share. A long-lasting friendship treasured fondly by both of them for years to come.

Diving into this pile of old torn records, I feel a sense of belonging. A jagir that is awarded to my great-grandfather is inherited by my grandfather and now, by me. Documents of praise have passed through the hands of four generations of my family. These accounts date back to late 1800s, having survived over a century, through two world wars, the Nationalist Movement, Partition and are rediscovered in this age when the culture of letter writing is long-lost. The feeling of such a discovery is surreal.

Having never met my great-great grandfather, or my great grandfather and having spent only limited time my grandfather, these artefacts are the only things left of them. As I uncover, trace and make sense of what all is left of them, I feel exalted and curious with every new discovery/letter or document. Everything has been documented so it would be remembered. My grandfather has compiled his father’s letters in a dossier titled titled “My father’s Letter Drafting (18-1-1932 to 13-10-33). It is a unique feeling to know almost five decades ago, he would have gone through the same material. Now almost five decades and two generation down the line, I find myself doing the same. There is a sense of pride in this inheritance, but most of all, I miss my grandfather, for maybe there were certain feelings, even questions, that we shared in this endeavour.