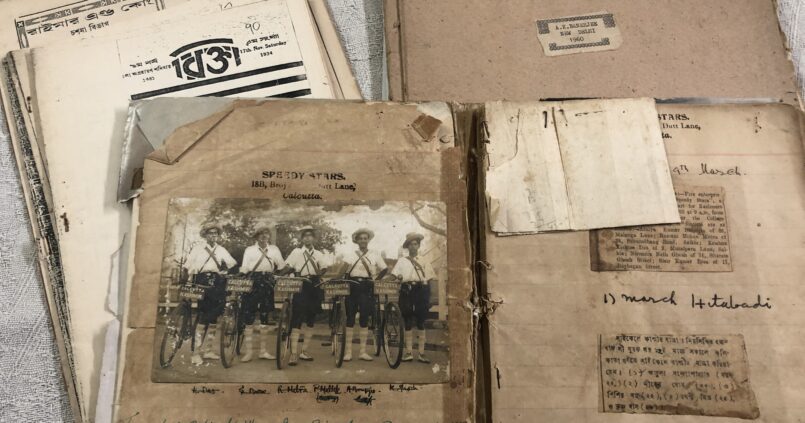 The bicycle today has become an item of luxury and a fitness accessory for many of us. For people from my generation – having grown up in the late 80s and 90s – the humble bicycle would find a mention in our parents’ nostalgia trips, famed stories of how they travelled from one end of a city or town to another on them. I would often hear my mother and her siblings wax lyrical about their father’s (my grandfather) bicycle, which is a constant companion in so many of his old pictures. Since all of my mother’s sisters lived in New Delhi. I’d often hear about my grandfather, the late Atulya Kumar Banerjee’s travels’, particularly about an epic bicycle journey that he undertook in his 20’s from Calcutta to Kashmir in 1933.

My maternal uncle or Mama, Aurobindo Banerjee, a retired IRS officer told me all about it after noticing my growing curiosity after my older brother and I discovered a set of letters and pictures tucked away in a cupboard at home, belonging to my late parents. My uncle and my youngest aunt (my mother’s younger siblings) showed me an impeccably kept journal my grandfather and his friends kept of their bicycle trip, amusingly titled “Speedy Stars”.

The diary is complete with pictures from the start of the trip (they were flagged off with much fanfare), to careful cataloguing of the entire journey. It looks more like a conventional notebook, the kinds you and I may have taken to school, its hardbound cover neatly contained in a glossy sheet of coloured paper.

“The diary, along with a few other items was handed over to me by my father’s friend and Reporter for the Speedy Stars, Romani Mohan Mitra. Romani Mitra was actually my maternal grandfather’s student and that is how he know my father. They were very close friends and I suppose he knew of my interest in history and such things”, says my uncle.

Compared to the frayed and tattered letters and pieces of paper with the ink barely legible, this diary feels newer than my notebooks would at this time. The diary is perhaps only half-full, with a combination of pictures (which are worn out and the people along with my grandfather are barely recognisable) and newspaper articles stuck to them with detailed descriptions of each.

The journey started on 12 March 1933, on the day of Dol Jatra (Holi) and was completed on 27 April 1933. Dadu and the rest of his team made it to their destination after about a month and a half, with a lot of the journey taking them through what is now Pakistan. “The money collected from the cyclists for the tour amounted to Rupees 250. This would have been a lot of money today, almost two lakh and fifty thousand, I believe”, says Mama. They also raised donations from other people and sold photos according to the records in the diary.

No one in my family could tell me a lot about the origins of the club, but from the newspaper articles in the diary, it says that it was like a fitness club of sorts, and they were attempting certain speed and endurance records too. Why did they do it? “Adventure. Plain and simple adventure. He was a writer. A creative person delves into all these things”, my uncle tells me. My uncle is extremely passionate and a keen writer himself. He tried to get details of the journey published in the Indian Express a few years ago but to no avail.

Three pages contain details of the journey: the members of Speedy Stars who undertook the journey, the financial contributions they made or the fund that were collected, and details of when the adventure began and from where. They passed important places like Asansol, Bagodar, Sasaram, Benaras, Allahabad, Kawnpore (now Kanpur), Kannauj, Brindaban (now Vrindavan), Delhi, Karnal, Moga, Firozpur and Lahore during this journey.

While the diary doesn’t mention too many details about the team members, one of the newspaper clippings quotes Mr. P Mullick, Secretary of the Speedy Stars Club as saying that “the club has been organised with the purpose of giving an impetus to the sporting spirit and young men who have a special liking for sports.” My uncle tells me that Mr. P Mullick couldn’t go on the trip with the group. Maybe this handwriting is his and he started maintaining this while the others were away.

Pictures in front of the Red Fort in Delhi, the Taj Mahal, a junction at Sialkot, the Dal Lake and the Shankaracharya temple in Srinagar are some places that are evident from the pictures. The journal also contains clippings from now-defunct newspapers like Liberty, Advance and the Amrita Bazar Patrika.

Another article published in Liberty with an eye-catching caption – “Four Bengalees’ Lure of Adventure” – reports of the group’s arrival at Cawnpore (Kanpur) from Fatehpur. “All of them were in high spirit, excellent health and good mood. They described their thrilling experience of the journey which lead through hills and forests… the young men halted for 36 hours (at the Bengali Union) and were looked after with great attention and care. At dawn on the 29th ultimo (of last month) they joyously rode and whirled their wheels off towards Etawah amidst cheering, shouts and prayers. The Members of the Union pray that the young adventurers may enjoy perfect health and keep up their spirits to accomplish safely their daring enterprise.”

The diary is almost scrapbook like, much like how I would make my own diaries of numerous Cricket and Football World Cups I would keep a record of in school, without ever knowing about my grandfather’s book-keeping ways. It is unclear as to how long the Speedy Stars continued for (the club appears to have had a registered address), or how successful they were in championing the cause of sports and physical fitness.

My grandfather, Atulya Kumar Banerjee, was born in Burdwan (Bardhaman) on 10 June, 1910 and moved to New Delhi from Kanchrapara in North 24 Paraganas, West Bengal in 1952 with his job in the Railways. With his wife and six children in tow (my mother was the second oldest and would have been eight or nine), Dadu moved to the Railway colony at Tilak Bridge. However, his date of birth on the India-Pakistan passport issued to him in 1955 is different – 1 August, 1911. This Passport was issued to him because his job took him to Pakistan for work a few times.

He had dabbled with editing and publishing his own magazine, a Bengali literary journal called Rikta, which ran from 1932-1935, a profession my great grandfather had been in before him. Perhaps he never got the recognition; a collection of his manuscripts and writings remain unpublished, kept lovingly by my uncle and aunts.

Rikta covered mainly literature, politics and current affairs of the time. These are mainly copies of the originals with the covers missing. My uncle donated quite a few of these to the Aurobindo Ashram some time back. Dadu used a pen name, Shree Shebok, for this but interestingly his contact information as editor and publisher is mentioned at the bottom of the last page of the journal. You can see some interesting advertisements in the journal too, for quintessential items like ointments and tea and Boroline, ofcourse!

There are several pictures of my grandfather along with his beloved bike, after he had been married; it remained a faithful companion for many years. According to my uncle, “He (like his friends accompanying him on the journey) had very ordinary cycles, mostly second hand, as were then available in those days, years before indigenous manufacturing activities started. I don’t exactly remember if he ever opened up on the trip (or on the Bengali journal he started around that time) to us. But if it was the same one we saw and was with him until it was stolen a few years before his death in 1984, it was an exquisite piece – a British Humber with a handle with a pure brass handgrip. He was extremely possessive about it and meticulously maintained it, though I used it extensively. Your mother too rode it.”

There’s another special thing about this bicycle journey my uncle tells me, “My maternal great-grandfather, Balai Deb Sharma, was a newspaper editor and a revolutionary. He went to prison quite a few times and funnily enough he met my grandfather in 1933 at the first stop of the bicycle journey in Burdwan. In fact, my grandfather promised him then itself that he would marry my grandmother.” Mama has heard this story from his mother.

I generally look at stories of Partition or when India was under British rule and not a lot of people talk about adventures and discovery by the youth, probably because people had other priorities.

Most of the articles highlight the reception they received from people wherever they made their pitstops – mostly at Bengali clubs. I have a fascination for travel, not only to experience a new place but the journey that takes me there and what one finds out along the way. Dadu’s picture with the bicycle has a shikaari shambhu look to it, but that is how I entertain myself when looking through such things. It is no coincidence that I made my first motorcycle trip in 2008 at around the same age my grandfather would have been in 1933.