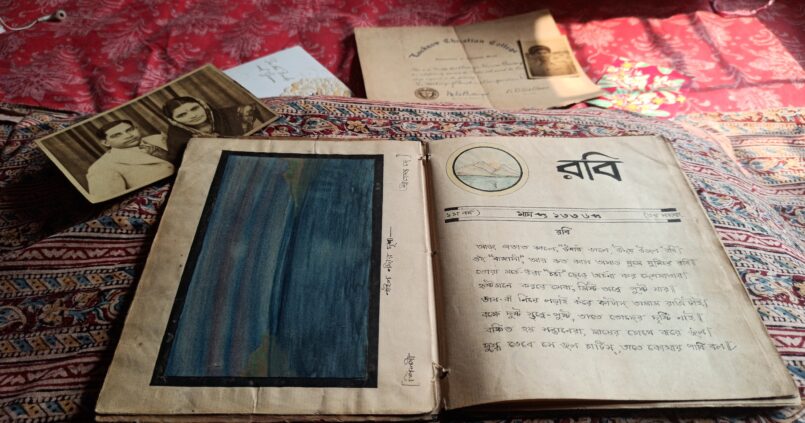 My paternal grandfather, Lt. Col. (Dr) Amiya Kumar Banerji was born in Lucknow, India in 1912. He was born into a ‘Probashi’, immigrant Bengali family who migrated from Nadia, West Bengal in the early 1900s. His father Sri Shishir Kumar Bandhopadhyay had five sons and two daughters and my extended family is now spread across different parts of India and the world. My grandfather was the third eldest son and married my grandmother, Sovana Banerji and had two sons-Ashish and Preetish. Ashish and his family have settled in Canada, while I am the only daughter of Preetish, who was a Radiologist at Kolkata Port Trust.

My grandfather, Dadu, was a doctor in the Army Medical Corps who served in the British Indian Army, and later the Indian Army. His illustrious career is remarkable as he came from a humble background but earned his way into medical services through his hard work and intelligence. He  travelled around the world and visited several countries including England, France, Japan, Egypt, Korea and the United States of America. In India, his family spent a large part of their time in Poona, as he was the resident Radiotherapist at the Military Command Hospital.

This magazine, somehow was preserved and travelled as Amiya’s family did across several places including Lucknow, Allahabad, Jalandhar, Pune, England and finally settling in Kolkata in the early 1970s. It is an edition of a publication of a Bengali magazine ‘Robi’, translated from Bengali as ‘The Sun’ by a group of Bengali young men known as ‘Bangiyo Chhatro Shomiti’ (Translated: Bengali Students’ Collective).  This was a student body initiative by Bengali boys (something like a Young Men’s club) living in Lucknow, trying to connect to their roots by celebrating their mother tongue (some of the stories have minor spelling errors and the content of the fiction evidently shows young minds grappling with ideas). It probably dates back to his teenage years when he was completing his Intermediate College Education.

The edition which survives is dated ‘Magh, 1336’. It follows the ‘Bongabdo’ or Bangla calendar and corresponds to January 1930. The writings are beautifully scripted and edited by my grandfather, Sri Amiya Kumar Bandhopadhyay and Sri Kamal Kumar Bandhopadhyay. My grandmother thinks that it is his handwriting that we see in the magazine and that Kamal and Amiya were friends. My grandfather would have been around 17 years old when he was editing the Bengali journal. I haven’t been able to find any evidence or archived material on this magazine and I presume that only a few issues were published.

My grandfather has a small contribution and not a very large personal piece that I can point to. The handwriting is distinct and well-articulated, emphasising the fact that Bengali was spoken, read and written in some schools in Uttar Pradesh. This was likely due to the influence of a large number of Bengali migrants who had moved west to different Indian cities and strongly established themselves. This was a vibrant and active community that set up institutions in Lucknow such as Boys’ Anglo-Bengali Inter College in 1901, the Bengali Youngmen’s Association in 1892 and the Bengali Club in 1903. One of their Presidents was the eminent Sri Atul Prasad Sen.

The magazine ‘Robi’ does not appear to be affiliated to any of these institutions and may have been an attempt to voice the patriotic feelings of the general student body during these tumultuous times. It was on 19th December, 1929 that the All India Congress in its Lahore session passed the ‘Poorna Swaraj’ or ‘Total Independence’ resolution which was made public on 26th January, 1930. The years 1929-30 also faced a worldwide economic depression whose impact was far reaching. My grandfather is not a political person. However his inclination towards patriotism during his early years is incredible and new information for us. Something we have realised while trying to piece information together in the magazine.

The first page of the magazine has poetry with strong associations to the concepts of “Swadesh” and enlightenment of the youth. There is a strong reference to the country as the motherland. The Bengali community should rise and shine like sunbeams, lighting the path towards independence. The reference to “Swaraj” strongly reflects the awareness of the youth. The year 1929 also saw a severe international economic decline, also known as the ‘Great Depression’, whose effects were felt worldwide. A cartoon of a certain “Clive Bank” failure is most likely a take on the economic situation. Another cartoon depicting a satirical take on the economic slump is of a wife asking her husband for new gold jewellery, but he fails to do so and asks her to adorn herself with his bones. The present generations express their emotions online via cartoon faces known as emoticons or emojis, which are extremely popular. The magazine, surprisingly has a set of online 1930s emojis, showing basic expressions of faces under the topic ‘How to be an artist’ ! So whimsical.

The last page of the magazine has an advertisement of a ‘Swadeshi Bhandar’- a shop selling Swadeshi goods in Aminabad, Lucknow. It is a store selling exotic Banarasi sarees as well as woollens at a reasonable rate. There are some highly humorous poems written on ‘luchi’ (fried friiters), ‘porikkha’ (examination) and ‘pantha’ (mutton) which is a reflection of the wittiness of the writers. A few beautiful water coloured sketches, faded but vibrant add to the beauty of the magazine. A small anecdotal account at the end of the magazine on the discovery of mermaids makes it a very interesting read.

The magazine has a red cardboard textured colour front and back cover, with a few marks on the cover and back cover. It was considered as an unimportant piece of paper and my Dadu probably saved it for the sake of nostalgia. In his last days he was in a cleaning spree, discarding lots of his personal documents but somehow this item survived. Lt. Col. Amiya Kumar Banerji passed away in the year 2000 in his Kolkata residence.

The notebook now belongs to my grandmother, Mrs Sovona Banerji and has been lying in a bookshelf ever since we have been living in Kolkata. During my teenage years, I often spotted it while helping with spring cleaning the books. The magazine captures a unique piece of not just personal history of my family but a larger socio-political significance from the viewpoint of India. It is a small piece of significant writing which depicts how historical events have a far reaching and deep impact on the youth. The independence movement moulded the minds of the young Indian men of that time. 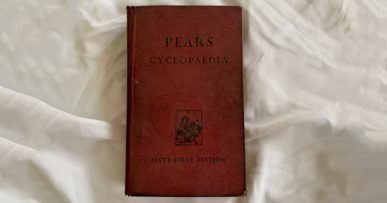