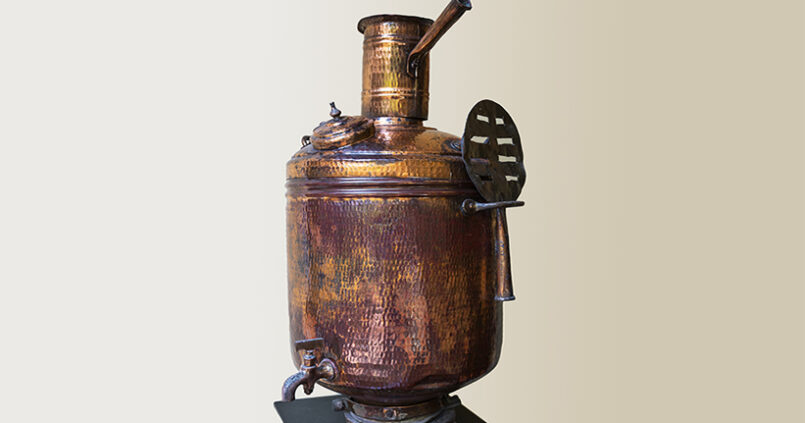 In the corner of Sandhya Venkat’s typical Madras home, a beautiful copper patina of burgundy and dark green catches the light pouring in through the courtyard. Although maintained exquisitely, turquoise and white spots reveal its proximity to the coast. The copper boiler originates from Madras and is likely from 1943, over a decade before Sandhya was born. It is 2’3” tall with a chimney that extends 5” beyond the vessel, complete with a narrow spout. The boiler itself is 15” in diameter and has a pair of handles, a concealed opening through which the boiler is filled with water, and a grating with a handle used to prepare the fire. At the base of the boiler is a ¾” tap. Engraved on its glistening handle are its manufacturing specifications: ‘¾”’, ‘TESTED’, and ‘300 lbs’.

Copper boilers were common in most Indian homes throughout the mid-20th century. The daily ordeal involved collecting coal, wood, or dry waste like coconut coir, that was used to fuel the boiler. The coal was placed on the grating and slid underneath the boiler, held in place by clips. Water was fetched from the home’s storage tank and poured into the boiler and the fire would be lit. As the hot air and smoke from the coal traveled through the chimney, the water in the boiler heated up within a few minutes. Periodically, the grater was jostled to sift out the ash that formed. Boilers could be placed outdoors, but were often inside the bathrooms that were large enough to accommodate it; soot-stained walls, the heavy smell of smoke, and sometimes a stinging eye would all be part of the morning routine. It was only courtesy that you made sure to refill the boiler with more water so as to not cheat the next member of your family out of a warm bath.

The copper boiler is a reminder of simpler times; rather ironic for the women who would predominantly use and maintain these objects. Sandhya recalls the hard work that her mother, Alamelu Subramaniyam, and siblings put in. As those were the days before electric mixers or geysers, or gas stoves, to be house-proud involved a lot of labour. For instance, to make sambar or rasam podi (powder), Alamelu Subramaniyam would use old-fashioned grinding stones at home as opposed to getting them ground at a shop. She would use an enthiram stone to prepare raw rice and make snacks. The device is made of two circular slabs of stone. A wooden stick was attached to the top stone and would be used to grip and rotate one over the other. Dals would go into a hole on the top and be ground between the stones. Sandhya points to the centre of her courtyard and there sits the very same enthiram, now converted to a water feature.

Sandhya was born in Madras in 1957 was and raised in a household of seven children — six girls and one boy. Sandhya and her siblings’ childhood is peppered with memories of helping with chores their mother would delegate: Saraswathi assisted their mother in the kitchen by cutting vegetables and cooking; Raji was in charge of dusting around the house, making the beds, and rolling out chapatis; Meena had to ensure the the younger siblings’ clothes were laid out for them for after their baths; Umma would help out by grating coconut and grinding masalas in the ammi kallu (mealing stone); Sandhya, the youngest of the family, was in charge of stacking the plates and vessels back in their shelves, and polishing the brass kerosene stove; Durga, the eldest and cleverest, was in charge of being in charge of the rest of her siblings, and their only brother, Ramu, got away with never being assigned any duties. As for the copper boiler, Sandhya remembers watching in awe as her sisters polished the copper surface with puḷi (tamarind) and fine ash to return it to its most impressive state.

Although she can still recall the smell of smoke and coal, when Sandhya was growing up, the use of the copper boiler tapered off as the electric geyser rose in popularity towards the end of the 20th century. But it would be reliably brought out each Deepavali, glittering and ready for the traditional Ganga Snaanam bathing ritual.

Sandhya looks around her home and identifies the objects she has acquired over the years and holds on to. While others might have traded in the new for the old, unimpressed with the obsolete, Sandhya cherishes the objects she uses to relate to her childhood and the past through. And now this shimmering alchemist’s apparatus, that was once so unremarkable it was in bathrooms around the country, has found a new charm in the eyes of new generations. Sandhya giggles at the thought that what was once in her mother’s bathroom is a showpiece in her home. But she’s thankful that along with stories of their grandparents and great grandparents, she can pass on these objects to her children and in turn their children.

This object is from a home in Madras. It’s part of a series in collaboration With Love, Madras, an upcoming book that explores the city through its homes. Follow @withlovemadras to know more about Madras’ rich history, its charming characters, and the beautiful spaces within its homes.