The heirlooms of Zarina Begum 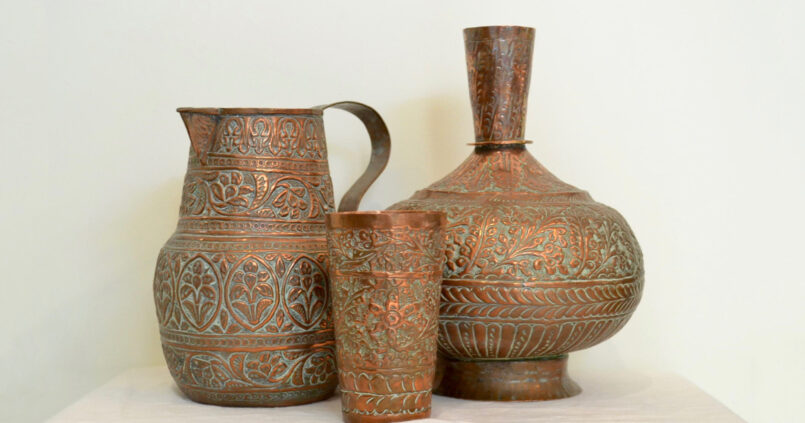 My maternal grandmother, my Nani, Zarina Abid, was born in 1934 with a ‘silver spoon’ as they say. Her Father Sheikh Muhammad Ilyas was a successful businessman, who expanded his eponymous distribution company (Sheikh Muhammad Ilyas & Sons) towards the middle of the British Raj. In around 1898, he and his father, Haji Sheikh Muhammad Din had established a small crockery business in Lahore’s Dabbi Bazaar but went on to associate with other multinational companies. They soon developed a distribution network of everyday household items across several cities in the Punjab and Kashmir region, working closely with British companies such as the Imperial Tobacco Company, Woodwards & Thompson, Lever Brothers Ltd. and Lipton Ltd.

As time passed, S.M. Ilyas proved to be one of the few Muslim business owners who managed to survive the prolonged economic crisis during the Independence Movement, working with a variety of wholesale producers in items ranging from cigarettes, soaps and toiletries to cereals, cements and fertilizers. As S.M. Ilyas & Sons expanded, the company began to be recognised by public officials as well. For instance, the Commissioner Lahore Division presented him with the certificate, dated 5 December 1938, which reads: “DISTRICT DARBARI CERTIFICATE This certificate is awarded to S.M. Ilyas & Sons in recognition of meritorious public service.”

His success at the time could largely be attributed to the fact that he continued the distribution of goods even when most businesses wouldn’t or couldn’t, particularly when the ethno-religious riots erupted within the city as news of an imminent Partition drew close. More than often, his team would collect the company’s stocks at great peril from deserted railway stations to ensure an uninterrupted supply to customers.[1]   His company kept growing amidst the religious tensions in the Walled City, where S.M. Ilyas along with his wife and eleven children lived in a large haveli in Dabbi Bazaar. My Mother often recalls my Nani telling her of the stress and fear that haunted every girl raised during Partition, regardless of ethnicity, religion or income status. She and her sisters were often exhorted to jump from the bannisters that spiralled the courtyard without thinking twice, in case rioters were to barge into the haveli. Honour would come before life at any cost.

Eventually, the new nation of Pakistan was created and soon after, the country’s economy began to grow. Given an increasing demand for all kinds of products, S.M. Ilyas’s business flourished. In due course, he would move the family from the Old Walled City into a landmark house with sprawling lawns in the New Muslim Town. The building was unfortunately demolished after his death and a full-fledged residential colony, including commercial center was established in his name on the vast land area released by the original house.

When my grandmother, Zarina, S.M Ilyas’s youngest child, got married in 1952, she moved away to Rawalpindi but would always recall the fond memories of her large family and treasured the gifts she took from home. In the wake of unforeseen events, perhaps explained only by divine destiny, she returned to Lahore a year before she died in 2001, and lived in a small house on Ilyas Street in Ilyas Colony.

My maternal grandparents were like most young couples of their time, married based on their parents’ criteria of eligibility: respectability, modesty, and family reputation. This picture is from their wedding day in 1952. They grew up in the turmoil as well as the aftermath of Partition, their perspectives strongly impacted both by the brutal insanity and massacre, as well as the acts of humanity and empathy they witnessed. My grandfather, Sheikh Abid Hassan, who was also from Lahore, would nostalgically tell us stories of saving his Sikh neighbour from rioters and bandits by hiding him under blankets in an old trunk while his house was being searched. He kept in touch with these friends, some of who migrated to England in aspirations of a better life. But his stories were always indicative of the heartbreak and pain of the families that were torn apart as the British left Hindustan in reckless apathy.

Ironically, however, his education and professional career until his retirement were entirely shaped by British colonialism and its remnants. He went to a university in Manchester, came back to be employed in the Attock Refinery Limited set up in Rawalpindi by the British in 1922, where he worked tirelessly for his entire career. He followed the ultimate British sartorial style, with shining shoes, and a matching tie, shirt and suit combination. He also loved the idea of writing letters and birthday cards, which he would send out to his family and friends in his immaculate cursive handwriting. My grandmother too – no doubt from her cosmopolitan father and husband and their dealings with the Raj – had inherited a melange of traditional as well as British mannerisms. She was a perfect homemaker, maintaining customs of proper evening tea, complete with cakes and pies, as well as investing in fine crockery and crocheted tablecloths. My mother and her siblings called their parents “Mummy” and “Daddy”, not “Amma” or “Abba” as it normally would have been in Urdu.

However, there were some things about my grandparents that remained intrinsically traditional, and they not only held on to these traits but also passed them along to their children. The items my grandmother received from her parents at her wedding further augmented this characteristic. Brass crockery may be found in almost any South Asian household, but this particular pitcher, surahi and glass set were a part of my grandmother’s trousseau, along with other ornamental utensils such as decorative trays and silver cutlery. The intricate floral motifs are of typical Mughal and Islamic designs, usually found on frescoes in mosques or in illuminated manuscripts and calligraphy in countries like Pakistan, India, Iran and Egypt. The stems and flowers carved on the pitcher, for example, could easily also be found on the painted walls of the 17th century Wazir Khan mosque in Lahore, or the mosaic tiles in the Shah Mosque in Isfahan, Iran, from the same time period.

Included in my grandmother’s habits were making sure decorative household pieces were dusted regularly and displayed in the formal drawing room—which included both western pieces such as porcelain candle stands and fleur-de-Lille tapestry, but also traditional wooden furniture and local carpets—a complete reflection of my grandparents own lifestyle. Similarly, this brass crockery was valued greatly, and kept with utmost care. My grandmother would take them out for use only on special occasions such as Eid and religious festivities, after which they would be safely cleaned and dried to prevent them from rust or ruin. Along with inheriting this brass set upon her marriage in 1982, my mother also inherited this habit of preserving things that had been in the family for decades.

Like my grandmother, my mother, Attiya too has always been sentimental, holding onto the memories of her parents by cherishing the presents they had given her; displaying some and safekeeping others in her cupboards or vanity case. Due to the travelling nature of my father’s work, these brass items journeyed with us, first to our home in Dares Salaam, Tanzania and then to Rome, Italy where my Mother would always find a suitable place to display them proudly. Over the years, I have tried to bring them back to their original shine, rubbing and buffing their surface with the ever-so-dependable polishing liquid brasso. Once polished, they have a very warm, reddish-brown colour, not as bright as the deep orange they would have been almost seventy years ago. However, I find that they look best a few weeks after they have been polished, when the patina finds its way back into the grooves and crevices of its floral motifs—restoring some of its antiquity.

I kept the set in my room for a long time, before realizing they deserved far greater attention. The three pieces now sit on a console in the entrance of our house in Lahore, alongside other decorative pieces my parents have collected over the years. The pitcher on its own, the glass placed upside-down on the surahi, as is customary. To me, the items that decorate our homes are an embodiment of the soul of the family, contained in the picture frames that hang on our walls, the carpets that lay on our floors and even the brass crockery that sits on our entrance console. They have a tale to tell of a past we inherit and hold onto, fragments of which we pass on to future generations.