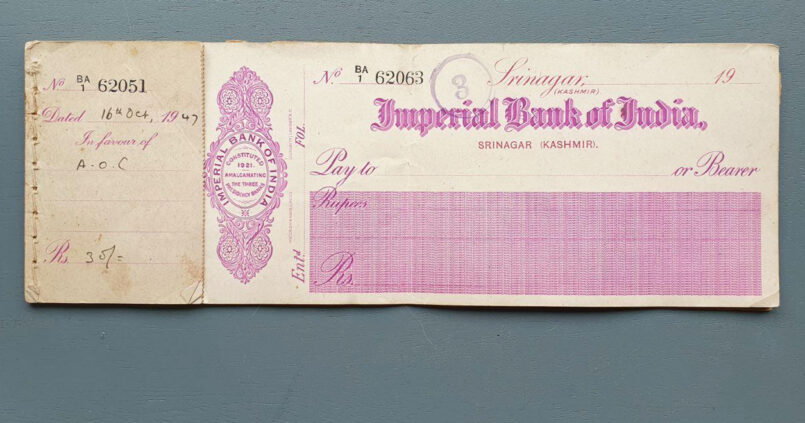 My Nana, Wajid Ali Khan, who we called Aghajan, told us many stories of his life in pre-partition India. His best memories were from his youth spent in Srinagar, his stories of activism, struggle during migration, hardships settling in a new city, his adoration of Mohammed Ali Jinnah and pinning for his home in Dalhousie.

His mother and my dadi were real sisters. He was a father to five daughters and two sons, my mother being the second He chose to name her Zammurad after his 13 year old sister who had died after a long illness. When I was a graduate student in United States, I met a very persuasive young lawyer from Srinagar. I hesitantly told Aghajan about him, worried about his reaction over receiving a proposal from an Indian. This was 2001, not 1947 but not much had improved in terms of the relationship between the two nieghbours. He listened silently as my mother gently introduced to him the idea of a possible cross-border marriage. The next day when he came by, as he did most evenings, he brought along a little gift for me. His consent and emotions surrounding the proposal were folded and tucked away in his checkered dress shirt pocket. He pulled out an aging cheque book and handed it to me.

I could not contain myself as I ran my hands over the print. Imperial Bank of India – Srinagar, Kashmir. The last set of cheques were dated from October till November 1947. His eyes shone so bright as he expressed how thrilled he was that my Walima would be in Srinagar. That was the quickest display of trust from a man who usually took a lifetime in accepting outsiders.

Wajid Ali Khan was born on 17th March, 1923 in Dalhousie, India. At the time of Partition he was based in Srinagar where he ran a successful Optician’s business. As the Pakistan movement began to gain momentum, Wajid participated actively in local politics in support of Muslim League. Meanwhile, Sir Radcliffe drew the fatal line and mayhem unfolded. Wajid’s immediate and extended family began to make their way across the border into Lahore. But many in Kashmir – him included – were confident that it would become part of Pakistan, given the Muslim majority of the Princely State, and remained.

Four months later, roughly around November 1947, as Wajid sat sipping tea at a tea stall, an old acquaintance spotted him and reported him to the authorities. Wajid spent the next 10 months in New Delhi jail. Many years later, in his evening visits to our home in Lahore, he would often recall how terrible the conditions were in which political prisoners were kept and chuckled at his own description of the thick cakey daal that was served in place of meals.

Immediately after his release, he bought an air ticket and flew over to Lahore. The elders in the family describe with emotions those traumatic and uncertain times when during the months after Partition, many male members of the family were unaccounted for. The extended family trickled in over a period or days, weeks and months, – making their way through Amritsar via the Wagha border by train and road.

The following year, Wajid married the beautiful Kishwar, a young 14-year-old first cousin. Along with his older brother, Salamat, he set up a new business of photography goods and studio services by the name Stanley Studio on Nisbat Road.

Aghajan’s pre-partition cheque book’s last entry was November 1947. I pride myself over listening carefully to his stories and yet there are so many unanswered questions. Unfortunately he had passed away before my first visit to Srinagar. After the customary Walima wazwan was served and the last guests left, my mother, brothers and I became tourists. We drove around Dal Lake and saw the valley from Aghajan’s eyes. We shopped in Suffering Moses, one of the oldest businesses on Polo View and tried to imagine him sitting there sipping golden kehwa with his bright sharp eyes which only spoke the truth. We soaked in the city and its backdrop realizing that life had come full circle. My mother expressed that she never thought she would visit Aghajan’s Kashmir in person.

I hold on to the cheque book like a medal of honour. I continue to tell the story of how it came into my possession and the significance of its last cheque entry. More than an old object or document, it is a seal of approval that my grandfather, our family’s patriarch, gave to me at the time of my marriage. Amid all the chaos that life entails, this cheque book was handed to me like a beautiful rubaiyat – on each page a couplet that connects my grandfather’s  life to mine.