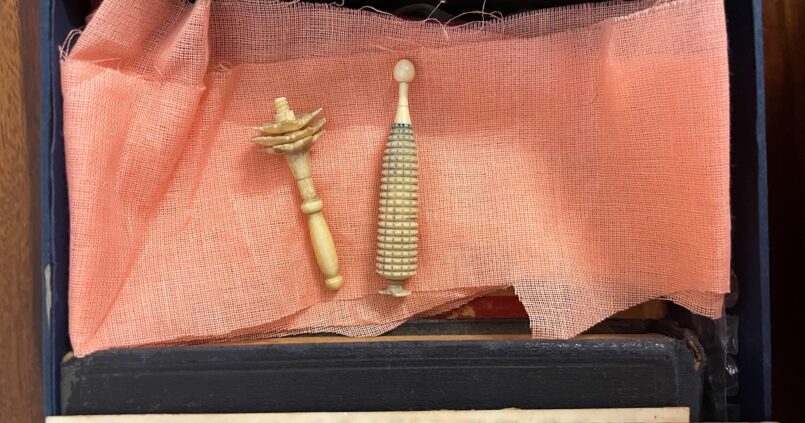 As a part of her trousseau, on her wedding – which incidentally took place during the India Pakistan war of 1971 – my maternal grandmother, Shashi Bhalla (neé Sood) carried a few objects from her mother’s trousseau from Bombay to Delhi. Two of these were later passed on to her daughter, my mother, Sapna Puri, and have now found their way to me. A surmedaani, and an ivory stick used to apply bindi.

Surma or kajal is a dark susbtance used on the lower waterline of the eye to darken them for shringaar. It is applied with a fine, long stick called suramchi, and stored at in a daani or container called surmedaani which literally means, a container for surma. Like many women across the Indian Subcontinent, my grandmother also made her surma at home using a recipe which, like this daani was passed down to generations of women in the family.

Every year, nani would make surma on Diwali, and distribute it amongst her sisters and cousins, as nobody, apart from her learnt the family recipe. Like her mother, Vedvati Sood (neé Beri), nani stored the surma in this daani bequeathed to her, and the excess was kept in small boxes made of chaandi. Homemade surma has medicinal value that cools and refreshes the eyes. Due to old age, nani has stopped making and using surma, but she still recalls the refreshing feeling.

The second object is a long stick which nani used to apply bindi. While I have not been able to find its traditional name, it is an important part of the shringaar ritual, as wearing a bindi, especially among Hindu women is particularly important. Traditionally, bindi is in the form of powder or paste, which would be applied, mostly by women, on their forehead, aligned with the nose, and between the eyes. Often in different colours and designs. My grandmother would apply her bindi using a thin sheet of chaandi which had a  design for bindi cut through it. Placing the sheet on her forehead, nani would dip the end of the stick in the bindi paste or powder, and trace the design on her forehead, by filling the outlined design on the sheet.

This surmedaani is made of pure ivory and is three and a half inches tall. While I could not find the accompanying suramchi, its smooth, round head extends into a long neck which, upon rotating in anticlockwise motion unscrews itself from its grooves and sits separately, as the cap of the daani. The outer body of the daani has been designed through detailed cut work, into small even, symmetrical squares. Bits of black surma has darkened the mouth of the container and has settled between the squares. Inside, there is still some surma left, which has coloured the daani in black. Below this, balancing on a short leg, supported by a paper-thin ivory platform, this beautiful daani stands erect.

The ivory stick used by nani to apply bindis on her forehead is 3 inches tall and extremely thin, its width is less than a centimeter, but the flowers on the top make the stick seem broad. The ivory is extremely smooth, it has been carefully designed and divided into different sections. At the bottom of the stick, the ivory has been given a U shape, and has a small crack on it. This part of the stick is used to draw bindis on the forehead. Extending upwards, the stick curves into an ivory band which encircles the stick. Above this, the stick broadens. Sporting three flowers, carefully cut out in ivory and placed on top of each other, like the petals of a lotus, the two flowers below fill the gaps between two petals in the flower above them. Though slightly chipped, the flower in the middle rotates in circular motion, while the rest stay still. Above the layers of flowers, the stick becomes thick, this keeps them in position. What I have with me, is only a part of the original stick, for at the top, there are empty circular grooves which, nani tells me, held more such intricacies. The stick has aged more than the daani, as it has acquired a darker shade of yellow than its companion.

In April 2020, nani had mentioned the ivory surmedani to me in one of her stories. After a searching for a few days, I found the ivory stick instead. Unaware of its use, I presumed it to be the suramchi of a grand surmedaani. When I showed it to my grandmother, she told me the what the stick really is, and its use. She then, from memory drew me a picture of the surmedaani, and asked me to look for it. After searching for almost year, my mother found it in June 2021 and with it, also handed over the history of generations of women of my family.

These two objects belonged to my great-great grandmother. Unfortunately, neither nani, nor her sisters have been able to recall their grandmother’s name for too many years have passed. Married into a family of zamindars in Nur Mahal, the fair, blue eyed lady meticulously followed and taught her five daughters, of which my great grandmother was the third, rituals of shringaar. From draping yards of fabric, to wearing beautiful sets of shalwar kameez with modern juttis. They would neatly braid their long lustrous hair and, wear a variety of jewelry. Beautifying their eyes with dark surma, they would accessorize it with fashionable spectacles. Finally, the women would conclude this ritual with a hint of fragrant attar.

Many eons ago, nani tells me as she was told, her grandmother had asked the family kaarigar to make these beautiful instruments for her personal use. Later, these were passed on to her third daughter, Vedvati at the time of her marriage to Sant Ram Sood, on the Basant Panchami of 1927.

While I have not been able to find more about the foremost bearer of these objects, my great-great grandmother, there is a tale that nani often recalls.  Like the recipe of surma, a few more objects of beautification and health were made at home. As the tale goes, years back when Vedvati’s mother was visited by a saint, who taught her the recipe of an eye medicine, and instructed her to make and distribute it among all, but to never take anything in exchange. For she would lose all her knowledge otherwise. Obligingly, she made the eye medicine using fresh rose water stored it in a sippi, a container made from seashells, and gave it to many, including all the family members. Like an heirloom, she passed down the recipe to all her daughters, who continued to practice it.

Though evolving with time, for centuries, shringaar has been an important ritual practiced by women across the Indian subcontinent. Along with surma and bindi, many other practices are involved in the ritual of shringaar, such as applying fragrances, adorning jewelry and decorating one’s hair with flowers.  Emphasized and taught to all the women in the family from an early age, the rituals of shringaar are not just practices of beautification, rather a tradition which brings generations of women together. Along with shringaar, various aspects of daily conduct, rituals and rites, secrets and wisdom is passed on to the younger women.

Though only a fragment of the original surmedaani, and the once long, bindi stick have survived, I am the fifth generation in my family to cherish these things of beauty. As I hold these small pieces of ivory in my hand, I think of all the women who possessed it before me, and gave it a prominent place on their dressing tables. The way heirlooms are passed from one generation to the next, especially to daughters and granddaughters from mothers and grandmothers, is an intimate act in itself, and has a magical touch to it. Wrapped in a mulmul cloth and stored in a box with other family heirlooms, these two objects make me think of all the hands that they met, days that they saw, and the secrets they hold. For, even when a part of an object survives, it becomes the custodian of the days that were once lived, and carries with it, an essence of its past owners.