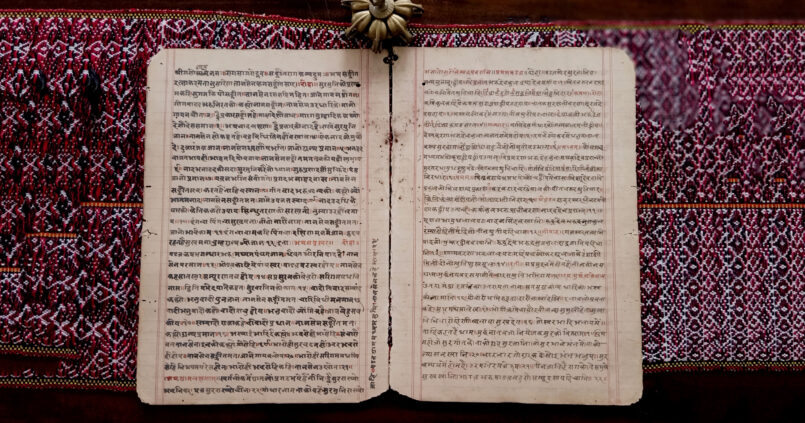 In my possession is a manuscript that is now more than a century old. The pages have aged to a fragile golden brown, the edges crumbling, some have gaping holes. Altogether the document is about 4 inches wide at the spine, and I would estimate it to comprise of 300-350 handwritten pages. The title page begins with a customary Sanskrit invocation to Lord Ganesha, followed by the credentials of the author, written in English, Hindi and Farsi. The name of the book is Sangeet Benode and can best be described as a treatise on Indian Classical Music. Written in Brajbhasha, khari-boli, and Sanskrit, it is a collection of over one hundred original bandishes or compositions in different ragas; the author mostly signs off in English.

In all likelihood, the manuscript was never officially published because it looks like it was never completed. There are three different handwritings in it, but a single name – Gurhu Narayan Lall Verma who takes credit on page one, and states that he has been given the responsibility of writing and compiling this book in the year 1913 (samvat 1970).

I own this book much by chance, from my marriage into a family from Lucknow. When my husband’s grandmother’s house in Mahanagar, Lucknow, was being sold and its contents including books, papers, utensils, furniture were being downsized, my husband picked up this book. He must have been a teenager at that time. After we got married I took an equal interest in preserving it. Nobody in the family remembers exactly how this manuscript found its way to them, but, there are two possible explanations – it was customary for a Ragmala collection or a collection of original compositions in raga music to be a part of the dowry of affluent families in India at that time, so this could have been such a gift. There was also mention of a relative who worked at a music school in Kolkata, and he could have brought it in.

The fact that the book was old and might have contained material of value was pretty obvious. But at that time, nineteen years ago, as a newly married girl, I did not have the maturity, or intuition to go about exploring it in depth. The first time I set my eyes on it, I was overwhelmed by the sheer number of compositions, notations and ragas, and assumed it was simply a repository of a musician’s original compositions. But I was wrong.

I am a practicing dhrupad vocalist. In 2020 my humble music world suffered a setback, and I inwardly began questioning the relevance of what I was pursuing, and how I would take it forward. I needed to reinvent, find new and original content, and dramatically individualize my musical identity. Then it dawned on me. Maybe that original content could come from the hundreds of compositions in Sangeet Benode.

So there it was – a new path of discovery, of learning and finding myself, in the musty, tattered pages of this manuscript that sat before me like an ancestor, waiting for me to ask it “will you teach me?”. When I finally opened it up in September 2021, along with the untapped treasure of original compositions, I discovered rare prose and poetry, some elevated to scriptural significance. I sometimes wonder why this manuscript should have fallen in my lap, but whether I am the rightful heir to it, cannot any longer be questioned.

I’ll take you through the fascinating elements of this great treasure. While perusing the pages, I found torn pieces of newspaper used as bookmarks, and initially dismissed them, drawn only to the compositions and notations. But something caught my attention and as I began reading through the torn bookmarks, I was amazed to discover they were from a Hindi newspaper reporting on World War I.

The raga categorization in the manuscript is based on the Shaiva tradition and the writing belongs to the pre-thaat era. This is an important detail – that the raag categorization is not based on the popular thaat system propagated by Vishnu Narayan Bhatkhande, but predates it to a time when ragas were categorized based on the six ragas created by Lord Shiva, and the subsequent wives, sons and grandsons of these six original ragas.

Every few pages, one comes across a half or full-page watercolour painting of the raga being discussed in the compositions. From as early as 14th century, music theory texts have visualized and gendered ragas. Students of music were supposed to learn painting so they could meditate on the raga, evoke its image and then translate their vision into visual art. Historically, there were three distinct and interlocking elements of raga understanding – the technical knowledge and understanding of raga at the skill level (raga), an intellectual and artistic understanding of the raga at the aesthetic level (ragamala), and an inward evocative connection with the raga at a spiritual level (ragdhyan). The book seems to be based on this thought. I am also an artist and would always wonder why I find my music and art sometimes like two sides of the same coin; and just like that, Sangeet Benode answered that for me too.

Classical music compositions, their words, taal and gait, like any other art form can show us a glimpse of the time they were made in. Here too there are compositions from the Dhrupad genre and the Khayal genre, indicating a period of transition or popular movement from one to the other. There is also a poetic description praising a person called Mahendra Chatterji as the inventor of the harmonium, thanking him for giving a new life to Classical music. Even today traditionalists contest the use of harmonium and accuse it for impoverishing the purity of the musical rendition. But I can deduce that this was a time when the orthodox classical music was losing its popularity and people were experimenting to survive.

The final uniqueness that I have chosen to present is that the manuscript contains a number of original compositions by the legendary singer Tansen, including “Tansen Krit – Raga Sār“, a rare two-page poetic scripture containing intricate knowledge of classical raga music. It mentions the birth of raga-sangeet from anhad naad, and later goes on to describe each swara in a couplet form with its birthplace, its vehicle, the colour of its clothes, its caste or antecedents, and the names of its shrutis or microtones. Among the compositions I found one in Raag Malkauns with the words, “chiranjeevi raho Raja Ram…” – this would make most of us think that this is written about the glory of Lord Ram, but that is not the case. Very few would know that Tansen began his career and spent most of his adult life in the court and patronage of the Hindu king of Rewa, Raja Ramchandra Singh (r.1555–1592), and the composition was written in his praise. Tansen seems to have written numerous such compositions, many of which find place in Sangeet Benode.

I have wondered if this manuscript contains anything of value. Maybe none, because it belongs to an era the musical detail of which is no longer relevant or useful for today’s world. Or maybe none because standards and conventions for the learning and practice of music have moved so far along that it makes no sense to revisit it, especially since it might push many out of their comfort zone. But for people who love to swim against the tide, myself included, this treatise is a treasure. For me, this manuscript is a vehicle to get a glimpse into history, which when approached with a childlike open mind, could lead one into an alternate musical system that had once been in practice. To discover the occasional gem that lies hidden in these crumbling pages, and perhaps carve out a unique musical journey. A lot awaits us in the aged pages of this forgotten book. 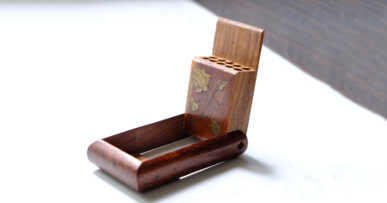 Heirlooms from the Modern Gentleman