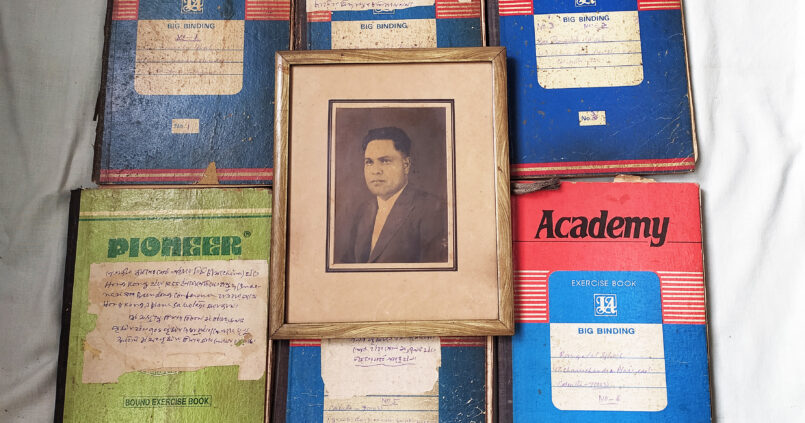 15 August, 1990. My paternal grandfather, Sri Rangalal Ghosh starts to write his autobiography at the age of seventy-eight. After thirty long year, this immaculate piece of work will eventually make its way to me.

He writes this memoir on simple hardbound exercise books in pure Bangla using a ball point pen. It is an absolute treasure trove, and like all personal memoirs has many interesting anecdotes. In total, he writes one thousand detailed pages. Despite thirty years old, the original manuscript is in a very good shape. It has been carefully preserved by my elder aunt who gave it to me earlier this summer.

According to our family’s longtime well-wisher, Gopal Kaku, who has been working in our family since my grandfather’s times, he would come down to the mezzanine floor at 3:00 pm in the afternoon. My grandfather, Thakurda would have his tea, take his medicines and then begin to write. He writes a vivid account of his life in six volumes of detailed chronological accounts.

In the foreword, he writes, “The life story and memoirs of a senior freedom fighter who was a trusted associate of Netaji Subhash Chandra Bose, and an active member of the Azad Hind Government.” He acknowledges that he is not a writer, but is merely putting his experiences together chronologically. His efforts, he believes, will only be successful once people are fully aware of India’s freedom struggle and the contributions of Netaji Subhash Chandra Bose. The memoirs cover a detailed chronology, from his birth in 1912 to his life in Kolkata in the late 1970s and 1980s. My grandfather writes about two motherlands – one, his birthplace, India and the country, Burma- which gave him shelter for many years. The text is divided into three parts. The first part covers the initial days of his life -birth, childhood and education; the second details the freedom struggle and business in Rangoon and finally, the third settles into his life in Kolkata.

Rangalal Ghosh was born on 16 February, 1912 in an East Bengali family of Noakhali, in then undivided India. His early education was completed under the guidance of a home tutor, following which he studied, at the Arun High School in Noakhali. He passed his intermediate examination from Victoria College in Cumilla, during which he was also a volunteer of the Congress youth committee. They would visit hospitals on behalf of their local club to help the patients, as nurses were not there in large numbers. Only a few ward boys were present. They would even cremate the bodies of patients who had no one to look after them. From the early age of nine, he has been actively involved in social work. He gleefully thanks his father for encouraging him. The pages come alive when one reads them, taking the reader deftly back into time.

He mentions the name of Satyendra Chandra Mitra of Noakhali who was an active member of the Jugantar Party, and later joined the Swaraj Party. Since childhood, thakurda had an eager interest in the freedom movement. He had heard about the Chittagong Arms Haul in 1932, where arms and ammunition would be secretly passed and acquired at night. Chowmuhani being a major business centre was the focal point of all these activities. My grandfather was even arrested and spent time in Cumilla Jail and Dumdum jail. While in jail, he used to cook food for the inmates. In 1940, with the help of one of the inmates, he managed to escape prison and fled to Burma by ship.

In 1943, Netaji Subhash Chandra Bose took over the charge of the Indian National Army from Rash Behari Bose when he arrived in southeast Asia from Germany on the former’s request. Many people joined the Azad Hind Fauj at this time. Doctor Lakhsmi Swaminadhan(who later became Lakhsmi Sahgal) left her bright career of gynaecology behind to join this regiment. My thakurda had heard about Netaji from Satyen Mitra and many others. When he heard that Netaji had come to Southeast Asia he was anxious to meet him and join his army.

His wish was fulfilled pretty soon and he got a chance to work under the leadership of one of India’s greatest freedom fighters, Netaji Subhash Chandra Bose. The Azad Hind Government was officially established on the 21 October, 1943. Thakurda writes about this day in detail, mentioning the names of the Ministers who were given their respective duties in various departments. Colonel A C  Chatterjee was made the Minister of Finance; S A Ayer was the Minister of Publicity and Propaganda; Netaji himself was the Head of the State, The Prime Minister and the Minister of Foreign Affairs and Mr. A M Sahay was the Secretary.

In 1945, Netaji appointed my grandfather as the Air Raid Precautions (ARP) Officer of the Indian Independence League headquarters in Rangoon. Even the appointment letter has been carefully preserved by our family. The memoir clearly states how happy he was to be associated with Netaji. He recalls his feelings when he first had a talk with Netaji. Unable to sleep the night before the meeting due to excitement. He even requested Netaji to call him “tumi” and not “apni”. He writes in Bangla, “Ami ei sangbad janiya nijeke oti soubhagyoban mone koriya mone mone otyonto anondo onubhab korite lagilam je Netajir moto ekjon mohan neta jahake sara Asiar lok Netaji boliya manya kore, sraddha kore agamikal amar shonge tahar samna samni dekha hoibe ebong kotha hoibe. Eita amar jiboner sobcheye boro soubhagya.” I consider myself lucky to know that I would be meeting Netaji personally for the first time tomorrow. The whole of Asia respects him. That I would meet and greet this great leader gives me immense happiness. Once again , I render myself very lucky to have got this opportunity.

The pages elucidate the everyday mundanities and the passionate politics of the time. He writes about The Hikari Kikan, which was the Japanese liaison office responsible for the Japanese relations with the Azad Hind Government, usually used to take care of the ration and daily needs of the INA officers according to their ranks. How Netaji used to travel in a moss green coloured Ford V8 car and took care of the Indian residents in Japan and other parts of southeast Asia including Burma and Singapore. He writes about one particular incident. A south Indian wife and her son were seen waiting outside Netaji’s office and the lady was constantly crying. When Netaji arrived and met with the lady, she told him hat her husband had been arrested by the Japanese military police two days before and she hadn’t been able to locate him. She was very scared. Netaji assured her that he would find her husband immediately. He called the chief of the Japanese military and requested to meet him. Eventually, the man was found and brought to Netaji’s office. Netaji told the Japanese not to do such a thing in future. “If any Indian does something fishy, it will be the responsibility of the INA”, he said.

My grandfather recalls meeting Captain Laxmi Sahgal, who was the chief of the Rani of Jhansi regiment. Later,  his job was to prepare roads and proper resting places for the soldiers of the INA in the areas captured by them. He had to meet Netaji and take the necessary instructions from him and his officers who were incharge of this department. They used to take all the raw materials and do the work very swiftly.

One can feel the tension and fear while going through the pages. There was a constant fear of being bombed by the enemy planes. Soldiers had to be very cautious, while some travelled by land, others travelled by train. The railway bridges were a constant target of the British fighter planes. People used to travel from one place to the other mostly during the night. Thakurda also writes that the British Government in India refused to accept the food and ration supplies sent by the INA for the manmade famine of 1943. The memoir even mentions the day when the Indian flag was hoisted for the first time on Indian soil. Major Shahnawaz Khan was incharge of this mission and the Indian Tricolour was hoisted at Moirang in Manipur. This was the first time that the flag of India was being hoisted on Indian soil that had been possessed by Indian soldiers. He says that this incident increased the mental strength of the INA soldiers to a great deal. He writes that before an officer went to war, he had to write a few things in a register. One of the things that he had to write there was what did he want to become when he would visit free India. My grandfather recalls writing that he would want to be a farmer so that he can improve the lives of the farmers.

My grandfather travelled extensively in Singapore and Burma with Netaji. After 1947, my grandfather had a construction business all over Burma. He lived in Lewis Street and worked on several important Government water supply pipeline projects. My aunts , uncle and father were born in Rangoon, and were gradually sent to Kolkata by my thakurda. My father was the last of his four children, who came to Kolkata from Rangoon. Thakurda also moved back to Kolkata permanently in January, 1967 where he gradually set up a construction business and built his own house in the southern part of Kolkata.

My grandfather spent the last days of his life writing this autobiography, considering it his duty. After hearing about it since my childhood, I finally had the chance to read this document now. My grandfather had passed it down to my aunt, who had carefully preserved it all these years, with the eventual intention -– like her father – of getting it published. Maybe, I was destined for this job truly, for it is a treasure which will enrich our family and the history of India’s freedom struggle. 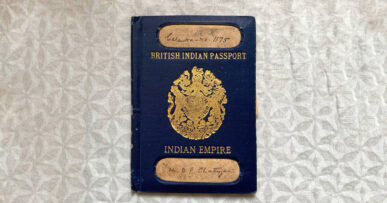