The Uruli and my Patti: A story that never was 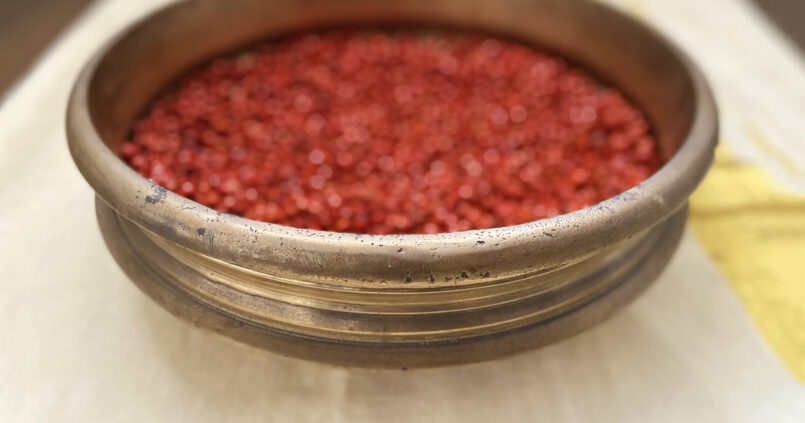 TEXT AND PHOTOGRAPHS BY KAVYA GANESH

My paternal grandmother, “Patti” was born in 1949 in Kuzhalmannam village of Palakkad, a city bordering Kerala and Tamil Nadu. She went on to live in Vaidyanathapuram, in her father’s ancestral home, with her mother, one sister and four brothers. Her mother, who was referred to as Thathammai by the entire family, was the reigning monarch of Patti’s childhood. She was the one who bought the expensive Uruli at the local angaadi.  Usually, Urulis would be made out of a mixture of bronze and brass but these were made of pure bronze and a considerably serious investment for Thathammai. As she bought four differently sized Urulis, she intended to pass on one each to her four sons. “It was a way for her to sustain her Parambariyam or lineage, and only the boys could take that forward,” says my Patti. The brothers were the important kingdoms; Patti and her sister on the other hand, unprofitable vassal states.

The Uruli as a vessel was popularly used for cooking over wood-burning stoves in Kerala and Tamil Nadu. Nearly 100 years old today, this Uruli was used to make payasam, vadaam maavu, sweets, kozhakattais, murukku and fried snacks. Around 14 inches in width and 5 inches in height, Patti recalls the way the flames from the wood burning stove would envelope this grand vessel as her mother deftly prepared the food and kindled the fire all at once. The six siblings knew that if they were sent to fetch the Uruli from the dark and scary “arai,” some rare treat was going to be prepared! The arai was a dingy underground room in the house that, in addition to storing items, played host to spiders and other creepy insects. It seemed ironic that an item so highly valued was relegated to the most desolate room in the house. I cannot help but find a strange kinship between the inanimate Uruli and my very real Patti: both filled with tremendous potential to bloom out in the world but restricted to performing duties based on others’ valuation of their worth. Clearly, there was a hierarchy of the vessels used in Thathammai’s kitchen – the stone and clay pots were for everyday use but the prized Uruli saw the light of day only two or three days a year.

The Uruli holds no sentimental value for Patti, who was never allowed to even touch it as her mother did not want her handling the valuable item. She laboured on each day, helping her mother with all the chores at home, but the Uruli was always out of bounds. It was for the boys and nothing should taint that. The relation between the high value of the Uruli and her forced distance from it revealed a theme all too familiar in my Patti’s childhood: that of being unwanted, undervalued and a baaram or a burden – a word her mother would openly use to refer to her and her sister. They were symbols of dowry and hence a loss to an already impecunious family, they would not carry forward the familial name and they would not bring any wealth or returns; essentially, they were not worth any investment. The Uruli, thus, was the entry-point from which Patti unknowingly became a voice of feminism and equality.

Equality was an ideal that Thathammai had never seen or experienced throughout her life. Of her siblings, she was the only daughter who was married off to a man as his second wife. Her family was struggling financially at the time and marriage to a widower, 20 years older than her, meant less dowry. Thus, Thathammai was herself once a baaram to her parents. The injustice of being the second wife led to years of bottled-up resentment that Patti claims was the reason for her bitterness towards life. In fact, Patti would often say to me, “My mother never spoke to me with affection. What will I remember?” And like so many women of their generations and after, both Thathammai and Patti had their lives defined by the patriarchal notions of society. Both were married when they were young teenagers and went on to live lives confined within the four walls of the house.

Thathammai had no share in her father’s wealth, all of which went to her three brothers. As a mother, her Urulis were meant for her sons. In fact, when Thathammai passed in 2011, Patti had to pay a sum of Rs. 200 to her eldest sister-in-law to purchase this Uruli that belonged to her own mother. “I had to give money to get just one of my own mother’s utensils”, Patti said, her tone betraying the harsh injustice of the entire situation. It was as though she realised the unfairness of the transaction only when she said it out loud.

The bias towards the male child, especially in inheritance rights, is common in India. Although succession laws have granted equal rights to parental property for women, legal policies do not always reflect social realities. Women, throughout their lives, are ingrained with the notion that they deserve an unequal share through social dogmas and mores that they often come to accept and perpetuate this valuation of themselves.

As a result, Thathammai resented the circumstances she was forced into as a woman, yet she continued to treat her own daughters poorly. However, change was trickling its way down, albeit slowly. Thathammai had to drop out of school in the 5th standard while my grandmother studied till class 10, a feat no other girl in her family had accomplished. Patti insisted that all three of her daughters, my aunts, get a college degree before marriage, and none of her daughters continued the practice of giving any form of dowry. The cherry on the cake being that all the assets owned by Patti and Thatha (my grandfather) are intended to be split equally among her five children. There is no Uruli among those assets, but there is an excited chatter between the steel utensils, bank accounts and their Mandaveli house; a new story has been born. The vassal states were slowly growing into full-fledged kingdoms.

This Uruli now sits in the pooja room of my home filled with red seeds as was common in my mother’s hometown in Kerala. “I have a fascination for all things old and antique so I wanted an Uruli”, my mother says. What was once used as an expensive cooking item is now displayed for its aesthetic value. To me, the newly polished, functionally reimagined Uruli is a symbol of resistance and change. It has taken a completely different journey from the one intended and found a defiant place in the Empire of my grandmother’s family. Defiant of all that Thathammai and the social monarchs before her intended. Patti may never feel like the Uruli is hers but in its layered grooves and subtle cracks it holds her story, a story that will resonate with many women at different levels. The Uruli is still preserving Thathammai’s parambariyam, but that of a redefined lineage, a lineage that society has overlooked for far too long. That of the girl child.

I would like to express my gratitude to Professor Devapriya Roy for her guidance and encouragement through the research and writing of this piece.