The sea of silver 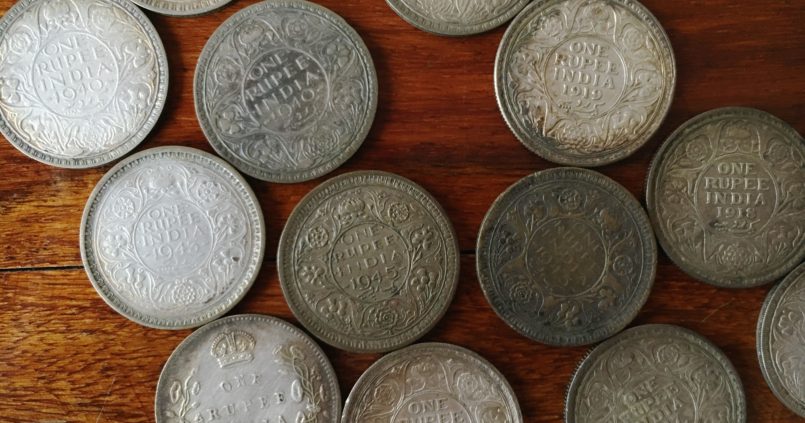 TEXT & PHOTOS BY AANCHAL MALHOTRA
New Delhi, India
Originally published in Remnants of a Separation: A History of the Partition through Material Memory (HarperCollins 2017)

The past has been surfacing frequently and unexpectedly these days. It is March 2016. I return home from work to find my paternal grandmother, my dadi, hunched over the bed, sifting through a pile of metal. a plastic sheet has been spread over the mattress, and her elusive coin collection, unseen by me but talked about frequently by my father, has been toppled on to the sheet. For as long as I can remember, this coin collection has lived discreetly inside a blue velvet pouch. Rupee, paisa, anna, taka, dhela – a veritable hoard amassed by her over the years. Mementos of monetary change in the subcontinent, some passed down from her mother and some her own. Today, they are strewn across the sheet, and my grandmother’s long fingers pick at them erratically.

But this is not an unusual sight in our house, especially of late. My grandfather died a few weeks ago and the plastic sheet has been ceremoniously laid out many, many times since. as drawers and cupboards are gradually emptied, belongings are laid out – some his, some theirs – to be classified for keeping or discarding. Coupled with this sorting are memories, which inevitably tumble out alongside.

I stand at the door and watch her. her eyebrows are knit together. Though I’m not surprised to find her this way, I am curious since this is the first time I’ve actually seen the collection. ‘What are you doing?’ I ask, visibly startling her.

‘I was sorting through some things and I found this pouch. It has my old coins. Purane zamane ke.’ she is speaking to me but her eyes have already returned to the pile. I come in and sit down on the cane chair next to her bed. She is singling out the larger silver coins and laying them in a line, chronologically. The collection begins from the year 1904 and ends at a coin from Independence, 1947.

As I study the coins, I think about what she means when she says this. What have I not seen in my time. My grandmother, Bhag Malhotra, was born in 1932 in the North-West Frontier province (NWFP, now Khyber Pakhtunkhwa Province) in Pakistan into an affluent family of landowners. Her father, Hari Chand Gulyani, the youngest of four brothers, passed away when she was a child, and her mother, Laajvanti, became a widow at the age of only twenty-five. They were cheated out of their share of the family property, leaving them in dire circumstances. In 1947, at the onset of the partition, my great-grandmother and her five children fled across the border and arrived in Delhi.

From the front of the lineup, she picks one and holds it to the light. Then she wipes it clean and places it in the middle of my outstretched palm. It is heavier than I expect, minted in solid silver, dulling at the edges but still brilliant. ONE RUPEE INDIA 1945. The amount is written in english and Urdu and is surrounded by a floral wreath. I flip it over to find an image of the king, embossed in all his regal glory. George V King Emperor, it reads proudly.

She takes the coin back from me and says, ‘In my childhood, one rupee was worth a lot of money.’ My grandmother is sitting next to me, yet her voice seems to be emanating from elsewhere. ‘I remember this incident from when I was six or seven years old. We needed money for something important and my mother had none. It had to be something important or I wouldn’t have done it, I wouldn’t have asked. It was always me when money was involved. I was always the one sent out.’

She pauses and runs her flattened palm over the sea of one-rupee coins. ‘I can still see the scene play out before me. The ancestral house was large and each of my father’s brothers had his separate quarter. I walked across the house to the room of my cousin – my eldest uncle’s daughter-in-law who was much older than me. she had had nothing to do with the division of family property and seemed kind enough. so there I was, knocking on the door innocently, hoping that she would understand our plight. she opened the door and asked me what I wanted. “Five rupees,” I had said to her. “Just five rupees, didi. We don’t have anything, and this will last us the whole month.”’

Suddenly, she stops narrating and looks at me, her moist eyes boring into mine, and I realize that my grandmother has extracted perhaps the most heartbreaking memory from her past. now, from the pile, she separates five of the one-rupee coins and stacks them on top of one another. Five rupees.

‘That was what I asked for,’ she gestures. ‘and she said no. she didn’t help us. no one in that house did.’ a small river trickles down her cheek and lands in a pool at the neck of her kameez. ‘Humne kya kya din nahi dekhe,’ she repeats slowly.

Her palm tightens around the five silver coins, claiming them. she brings her fist up to her chest and holds it against her heart, as though owning the currency now brings her delayed consolation. As she weeps, coins still clutched tight, I sit with a void in my heart for a memory that is not mine. In this instance, I am just a listener, a passive contributor to the vulnerable act of unfolding a painful past. Yet, at the same time, it is her very vulnerability and the intimate nature of this experience that provokes within me a sense of guilt. and I think to myself: am I an intruder?