The trousseau that stood the test of time 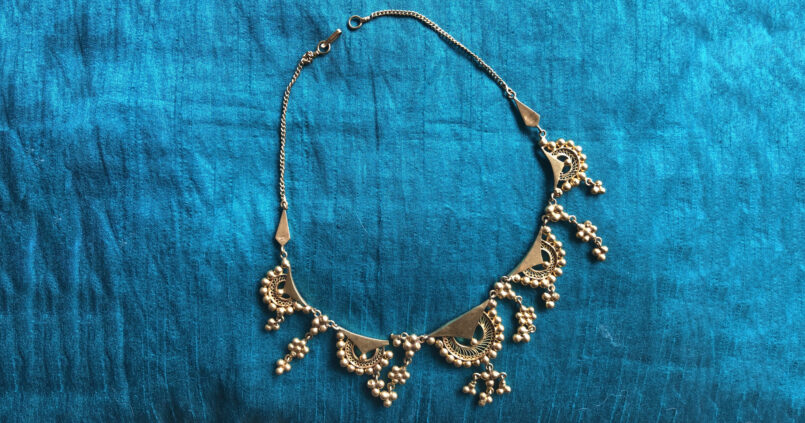 This necklace belonged to my late maternal great-grandmother, Kailash Marwah Nayyar, or Badi-mummy as I liked to call her. She was born in 1927 in Kunjah, a town located in the Gujrat district of Punjab, in present-day Pakistan. She was married at eighteen to my great grandfather, Dharampal Nayyar or Nanaji as he was popularly known, in the year 1945. This necklace, a wedding present Kailash Marwah Nayyar recieved from her in-laws, is one of the valuables that was passed down to her daughter, my grandmother, and the only thing that can be traced back to Undivided India.

Kailash Marwah Nayyar would have been a new bride in 1947, only two years having passed to her marriage, when the family had to flee to India. She couldn’t bear to part with her wedding trousseau, something that the family had acquired at great pain and expense, and this decision of hers proved to be a saving grace for the family. Made of pure gold, commissioned in Amritsar, the necklace came with a matching pair of earrings that were sold to overcome the family’s hardship during the days of Partition.

Similarly, over the next few months, Kailash Marwah Nayyar sold her luxurious wedding trousseau piece by piece to help the family survive in Independent India. And though this is an admirable thing, one can’t help but feel heartbroken at the thought of a young woman having to part with these markers of a new marital life. Objects of beauty and luxury – likely amassed by her mother and mother-in-law, and entrusted to her at the cusp of a new life – sold at such turbulent times. Ultimately, she was left with only five things from the original trousseau: a yellow Banarasi zari dupatta, a brown satin suit with zardozi work, a green tissue-silk suit, this necklace and a few bangles. This necklace is the only item that remains, but my grandmother’s memory of all the other things is as clear as day.

Born to Ramratan and Rajrani Marwah, my great-grandmother was one of 11 siblings. She was married to my great-grandfather at a time when his once affluent family’s wealth was on a downward spiral. The Nayyar familial haveli in Kunjah, that had once been one of Maharaja Ranjit Singh’s many houses, was the only proof of the wealth that the family had acquired through his late father’s title of Dewan sahib. Maharaja Ranjit Singh, popularly known as Sher-e-Punjab or “Lion of Punjab”, was the leader of the Sikh Empire, which ruled the northwest Indian subcontinent in the early half of the 19th century. The details of how the haveli came to be theirs are now blurry and likely lost in family lore.

The story of my great-grandparents’ journey from newly created Pakistan to India during the Partition is something I know like the back of my hand. It became a permanent sight, especially during my great-grandmother’s last years, that we would spend the evenings in her room talking about the past. Anecdotes from her life in Undivided India – some new and some repeated, that I would listen to with rapture each time. These storytelling sessions were inevitably followed by her fashioning the white chunni she always wore into the shape of a little mouse, and tickling me with it. Even towards her last days, she was a ray of sunshine. I was ten years old when she passed away, but when I look back upon those years, I feel grateful for the time that I had with her, for memories with a great-grandparent are rare and something very few people get to experience.

My great-grandmother’s accounts, though fascinating as a child, seem almost blood-curdling now. While the timeline is fuzzy, I know that she left with her parents for India before the violence was at its peak. Once in India, they stayed with relatives in Kashmir. Her mother-in-law and brother-in-law traveled from Kunjah to stay with relatives in Gurdaspur. But before they had left, they collected the family’s precious belongings. The haveli had a massive bawdi, a stepwell, with a few rooms at the bottom. Unable to imagine Partition to be a permanent or long-term decision, she locked these items in the rooms for safety, in the hopes that they would return soon.

And while his family left for Gurdaspur, my great grandfather however, stayed back to keep his job at a bank in Kunjah. His family may have migrated to safety, but in his mind, this talk of the division of land had to be merely temporary, and so he stayed to protect the haveli. One day, while on his way to work on his new cycle, he got confirmation that Partition was imminent. Instead of going to the bank or back to the haveli, he rushed directly to the train station to catch the first train out of Kunjah. Unprepared, he left in his bank uniform–a pair of shorts and a shirt – with only a little money in his pocket. Once on the train, he found a large, empty metal box and hid inside it for the entirety of the journey. To protect himself even further, he had wrapped his right arm with a piece of cloth to mimic an injury, but in reality, it was to cover a lotus tattoo – a Hindu symbol that if spotted, could be a death warrant. This act may seem far too specific to have multiple instances, but sadly enough I’ve come across similar stories of tattoo mutilation and concealment in the days of Partition on both sides of my family. I’m told that my great-grandfather’s train may have been one of the last that carried people to safety, for as soon as Partition was officially announced, these trains carried only the bodies of dead from one side to the other.

Thankfully, he made his way safely to Kashmir where he was united with my great grandmother and her family. They, however, were separated from her brother for a year and a half before and assumed the worst, till they reunited in one of the refugee camps. My great-grandparents moved several cities and finally settled down in Seoni, Madhya Pradesh. There, Kailash Marwah Nayyar turned her talents of knitting and crocheting into a successful business, in an attempt to regain all that they had lost. In 1952 they welcomed my grandmother, their only child.

It has been seventy-five years since this necklace was first made for my great-grandmother’s wedding, and yet it remains just as beautiful. It is crafted solely from gold and no other metals or gems, perhaps because the family’s financial situation at the time did not permit anything too extravagant. The necklace might seem relatively simple but when studied closely, it reveals an intricate detailing. Quite heavy for its size, it sits flush against the neck and because of the uniqueness of the design, feels as though it quite rightly belongs to another era.

Whenever she holds this necklace in her hands, my grandmother wonders how her mother would have looked when she wore it. All of eighteen years old and newly married in an Undivided India – when no care of Partition had foreshadowed the new couple’s life, no trace of worry had shown on their faces, no struggle for survival had permeated their days. This necklace was a symbol of union and hope. My grandmother thinks about how her mother would have looked on her wedding night, her neck adorned with this necklace, it’s matching earrings reflecting the moonlight in a time of no electricity in Kunjah. Many years ago, the necklace broke when my grandmother wore it to a party, so now it is kept safely in my grandmother’s locker. To me, the necklace is a pathway into family history – a remnant of their struggle, and my great grandmother’s strength.

Her father never spoke of Partition or his journey to India, and the things he saw or felt along the way were lost with his passing. My great grandmother on the other hand was a master storyteller with an extraordinary ability to retain and remember and from her, I learnt about the other side. As we celebrate seventy-three years of Independence, I remember her presence. As a child, I would associate her with her blue and gray walking stick, white chunni mice, and her permanent spot on my grandmother’s bed. But now more than a decade after her demise, time has made her mean so much more. Kailash Marwah Nayyar was a master storyteller, a human encyclopedia on Indian cricket history, a businesswoman, an amazing cook, but above all, a figure of strength, resilience, and enterprise.