Souvenir from the trenches of World War One 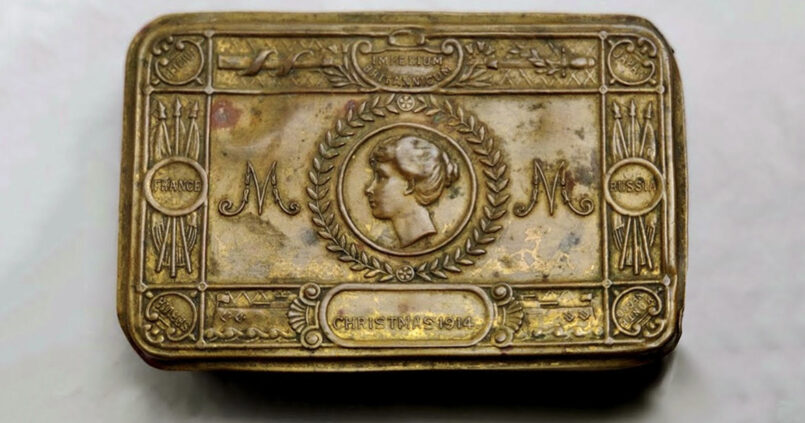 My grandmother, Jagdeesh Kaur Bhatia, kept the jewellery she wore on a day-to-day basis — a gold necklace and pair of earrings- in a small brass box that never fully closed. Though I never saw it myself, despite being around her most of my childhood until she died in 2011, I can imagine her peeling off the chain at night and reaching behind each earlobe to unscrew the stones, placing them both securely inside the box, and then finally closing the lid that would not fully shut. I can imagine her thinking it to be a decrepit item; that she must remember to get the lid fixed, only to forget about it completely until it was time to deposit her jewellery into it again the following night.

Little did she know, and I wish I could tell her now, that she was keeping her gold in a box that had history etched onto its very surface, history that would help me trace the possible explanation – and in turn the secret family lineage – of how this box from 1914 made its way to us, all the way from Western Front of the First World War, to the Rawalpindi of Undivided Punjab to the Indore of Independent India.

For a while, my father used this box to store a menagerie of items – a tiny maroon leather gutka emblazoned with ‘Japji Sahib’ on the jacket, a string of off-white prayer beads, a Canadian badge and a few foreign coins – before he passed it down to me. At first, I didn’t pay close attention to it because it looked like just any rusted old box. But when I looked carefully at the inscriptions on the lid, I was intrigued. The first thing that caught my eye was the bold lettering of CHRISTMAS 1914 on the lower part of the box. I found it strange that my Sikh grandmother would possess an item that had ‘Christmas’ engraved on its surface and presumably belonged in an era years before her birth in 1949.

It wasn’t that she was an orthodox woman who would disapprove of inter-faith items in her house. In fact, vaddi mumma – as we grandkids called her – was an open-minded person who would eagerly sit through the entire Kate-William wedding broadcast while reminiscing Princess Diana’s beauty, and could name all the players in the cricket teams of, not just India, but every other country as well. The strangeness was because having grown up within the sheltered environs of her Sikh family in the village of Panki near Kanpur, I could hardly imagine my grandmother indulging in activities related to other religions let alone buying things pertaining to them; the woman did not even know her own birth date, just like many from that generation and before.

Moreover, the box had other unusual words engraved on it. It is bordered with names of countries – France, Belgium and Servia on the left, and Japan, Russia and Montenegro on the right. Naturally, this further piqued my interest. Though vaddi mumma lived a comfortable life throughout her marriage in Indore, the family’s international trips happened only after her death. In fact, the only time she stepped out of the borders of India was on a Sikh pilgrimage to Panja sahib and Nankana sahib, in Pakistan during Gurupurab in 2001. So it seemed a bit out of place, if not sad, that she would own a box upon which were engraved the names of these seemingly random countries.

In the centre, there is the embossed figure of a woman in side profile; she wears her hair in a tight bun, and her neck is long and slim, in some ways reminding me eerily of my grandmother in her youth. On either side, the letter ‘M’ is stylish is etched. But the key to the mysterious box lay in the lettering at the head, IMPERIUM BRITANNICUM. My eyes caught this only after they’d seen everything else, and from thereon, it was just a matter of a simple Google search.

During World War One, nearly 1.5 million soldiers from Undivided India were sent to fight on behalf of the British Empire and its allies, as colonial troops. For most of these men, it would be their first time outside of their villages, districts and provinces, and hardly any of them could have imagined crossing the black waters to the continent of Europe to fight alongside European troops. Nonetheless, for the duration of the War, Indians served as combatants and non-combatants in the various theatres – from the frigid trenches of the Western Front to the deserts of the Middle East – earning war honours and praise for their gallantry.

As the first few months of the war drew to a close, the British King George V’s 17-year old daughter, Princess Mary expressed a wish that ‘every sailor afloat and every soldier at the front’ should receive a Christmas present, seeking donations for the “Soldier and Sailor Christmas Fund”. Due to the strong public support for the gift, £162,591 12s 5d was raised. The gifts were devised in October 1914 and distributed to all those who were serving in the War during Christmas that same year. This included not just British troops but also colonial troops, including those from India. The country names etched on it were actually the allies of the British during the war. Since it was an initiative of Princess Mary, the M stood for her name. The demand for these five-inch brass boxes was so high, that they were also distributed to a vast number of military personnel, prisoners of war, as well as the next of kin of 1914 causalities.

In Laindon in the Great War, Ken Porter writes that, “for smokers, there was one ounce of tobacco and twenty cigarettes, non-smokers received a pack of acid tablets, a khaki writing case and a lead bullet pencil, while nurses received chocolates.” Sometimes a pipe and tinder lighter too, were included. According to the National Army Museum, UK, the Committee in charge was obliged to respect the tastes and dietary rules of various ethnic and religious groups, understanding that changes may need to be made in the gifts intended for Indian troops. The Gurkhas received the same box as the British; for Sikhs, the box was filled with sugar candy, and a tin box of spices; for all other Indian troops, the box contained a packet of cigarettes, candy nuts and spices. Writing material was also included, as were greeting cards and portraits of the King, Queen and Princess. After consuming the contents, many of these brass boxes were either sent home from the front, or kept by the soldier as souvenirs.

Prof. David Omissi’s seminal book, Indian Voices of the Great War: Soldiers’ Letters, 1914–18, archives the correspondance of the Indian soldiers. In a letter dated from 16th February 1916, Kaiser-i-Jahan writes from Muttra, UP to her brother, Khabit Allah from the 8th Cavalry attached to the 2nd Lancers in France about this box. The last lines of the letter, originally in Urdu, read, “I have heard that all the soldiers got boxes at Christmas. Don’t go and give your box away, for I am very keen on seeing it.”

While perusing through all the available searches on this surprisingly popular item, there were eBay ads listing the box for a little over eight thousand rupees! Vaddi mumma did not get this from eBay, that’s for sure. My grandfather revealed that his wife had inherited this box in her daaj, the Punjabi term for trousseau, from her mother, Prakash Kaur Bhatia. From there, the pieces started to fit together. Although I never knew Prakash Kaur, I’m told that she was raised in an extremely wealthy family in Rawalpindi. Not born, just raised. Adopted at an early age by her own mother’s sister who could not bear any children, Prakash Kaur grew up in the lap of such luxury, wherein she had cooks to make and serve exotic meals and played with toys that were the object of envy and desire amongst all her cousins.

But then Watta-Satta, or Vatto-Satto, as we say in Punjabi, happened – an archaic custom of ‘exchange’ amongst families, defining the fate of many people at an early age. You take my daughter for your son, and in return give me your daughter for my son, was the gist. It was an aged custom, especially ubiquitous amongst people wanting to marry within their own surname and apprehensive about not being able to find a proper, say, ‘Bhatia’ in this case. So they made promises to ensure the marital safety of their children, regardless of how many years it would be before the marriage took place. Prakash Kaur’s biological parents had promised her to a man named Takht Singh Bhatia who belonged to a peasant family in a village near Kanpur. Her adopted parents, however, weren’t as happy with the match and about sending their beloved daughter to a kaccha house where there wasn’t even a trace of proper electricity (and there hardly would be, ever).

But Prakash Kaur never complained. Content with the life she led, she and her husband raised a family of three children, amongst them my beautiful grandmother. I am told that although Prakash Kaur was an introvert and hardly spoke even in front of her biological brothers, when she did, her words were carefully measured, as it not to be wasted gossip or complaint. Throughout her life, she maintained the refined essence of her upbringing – an urgent need for cleanliness and grooming, of health and good food – but no one ever recalled her being snobbish about it. Far from it, in fact.

While she would go back to her maternal home in Rawalpindi, the in-laws would fight over who would accompany Takht Singh to go pick their bhabhi and get her back to Panki, eager to spend a couple of days amongst the luxuries that they’d never seen before. But I wondered what Prakash Kaur’s family done to afford such a luxurious lifestyle? Again, it was this box that unlocked the secret to the family’s military connection. I learnt that Prakash Kaur’s father – the one who adopted her – was a buyer and seller of military equipment for the British. He secured a top position during the British Raj, and as a result, became an extremely wealthy and well-connected man. It was he who’d procured the box (amongst other military-related artefacts) and had most likely presented it to his wife, who further bequeathed it to their daughter, as a token of the status and splendour she grew up in.

Largely introverted throughout her life and never one to share her feelings, I sometimes wonder if Prakash Kaur deliberately gave this precious box to my grandmother, so that the silence on her end wouldn’t deem her into insignificance after her death. So that her daughter may have something tangible that enclosed the memory of her mother. I wonder if the box can also be seen as a memento of the life Prakash Kaur came from, the life she willingly relinquished.

One hundred and six years have passed since this object found its way to our family, and eventually to my grandmother, who kept it safely by her side. Though slightly broken, she had used it to store things like jewellery and keys. And despite being oblivious to its historical significance or value, she did realize its importance, even if as a token of the life she had left behind, or how her parents had doted on her. Maybe that is why she never threw this broken box away.