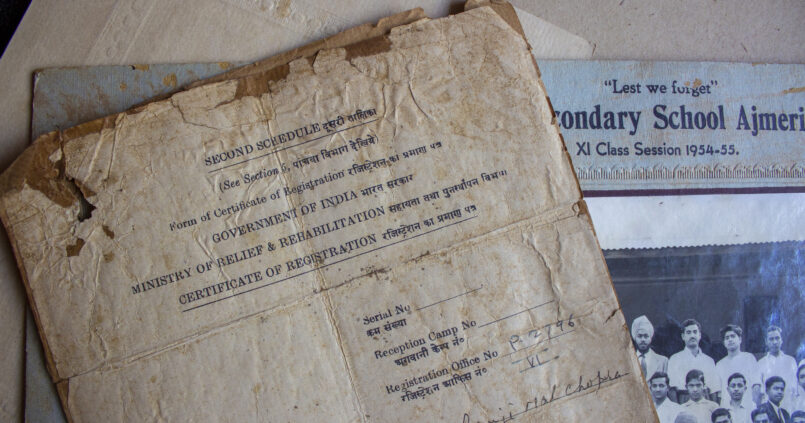 For most of our childhood, Mangal Sain Chopra, our great grandfather or bauji – as he was called at home – was a garlanded photo on our living room wall. Our first introduction to him as an actual person came when, aged eight and ten, we were to be given awards at a school event. When we returned home that day, our grandfather told us that bauji, too, was brilliant at academics. He recalled the time when his school’s principal decided to award him with a small scholarship amount, instead of spending it on a schoolboy’s usual indulgences, he went to the market and came back with a wall clock, some utensils, and other items that were needed at home.

This small but significant detail stuck with us. Over the years, we asked more questions and got more answers about the remarkable man that our great-grandfather was. Once, when the village well dried up, he dug a new one all by himself. Another time, he beat a professional wrestler who was foolish enough to challenge him to a duel. But most importantly, he was honest, diligent, and assiduous.

Born in 1904, Mangal Sain Chopra grew up in the lush green fields of Chak Maluk in Chakwal tehsil, nestled in the Himalayan foothills along the river Jhelum. He got a job with the Railways after his matriculation, subsequently shifting to Multan where he worked at the District Superintendent (DS) Office. Since he was now of marriageable age and had steady employment, his family began looking for a bride. Respectful of his family’s wishes, he told them to go ahead – but said that he wished to meet the girl once before things were finalised. But he discreetly also left word with his parjai ji (sister-in-law) that if by chance, Kaushalya Devi’s parents – acquaintances of the family from the neighbouring village – approached them, they could go ahead and finalise the byah without waiting for his okay.

And so it came to be, that Mangal Sain Chopra married Kaushalya Devi – called bhabhiji, pronounced as pabhji in the Punjabi way, at home – the daughter of a retired patwari from the neighbouring village of Farid Kasar, and in 1946, they moved to Rawalpindi to be closer to Chak Maluk. This was their last place of residence in Undivided India.

Our grandfather still remembers how, in June 1947, his father received a notice from the Railways. Would he continue with his job at his current location, it asked, or would he prefer to transfer to what would now become Hindustan? At a time when there was so much confusion about whether Partition would actually happen or not, the dispatch from the Railways made it clear to this family that the land that had always been their home would soon become another country. Barely a month later, after hurriedly wrapping up their affairs, the Chopras boarded the Frontier Mail, now known as the Golden Temple Mail, on a family pass – which bauji arranged through his contacts in the Railways – and bid farewell to their mulk.

Bauji, bhabhiji, and their four children, the youngest of whom was still a baby, arrived at the Delhi station after a train journey that was fairly uneventful but fraught with uncertainty about how they would rebuild their lives. They were still luckier than most, because at such a turbulent time, bauji’s Railways job, a sarkaari naukri, made him a central government employee – it was their foothold, their support, as they navigated the unfamiliar landscape of this new and unknown city. Their first few days were spent at the station itself, as bauji got accustomed to his job in Delhi. At night, they huddled in the station’s telegraph office with three other migrant families, having convinced the Railway officials to leave the office unlocked after working hours till they arranged other accommodation for themselves.

Bauji was finally allotted quarters near the Sadar Bazar station. The next few weeks were spent settling in, and slowly getting their lives back on track. Frequent visits were made to the Purana Qila camp, looking out for aunts and uncles and cousins who were gradually trickling in from across the new border. Having accompanied his father to the camp, our grandfather, who was only ten years old, remembers the chaos in trying to find their relatives, going through the long lists of refugees who had registered, the announcements on the loudspeaker, and the many migrant families struggling for rations.

Soon, the older children started working, and our grandfather started school near Ajmeri Gate. Three months later, bauji registered himself at the Paharganj desk of the Ministry of Relief and Rehabilitation, which was keeping a record of all incoming migrants and refugees. At that time, with no ration cards, driving licences or passports, their sole kaagaz or official identification paper – their first formal proof of them belonging to this new land, the first acknowledgement from the government that this family had left their home in Pakistan and settled in India  –  was this refugee registration certificate issued by the Ministry.

This document is still carefully preserved by our family, although it has yellowed with age and its edges are now frayed. Creases – from being folded multiple times, perhaps to tuck into a wallet – now permanently line the tissue-thin paper, which is slightly larger than an A4 sheet. It makes note of bauji’s addresses in what became Pakistan – both in Rawalpindi and in Chakwal – and is signed by a Mr Deshpande. The ‘Reception Camp Number’ field is blank, because the family hadn’t registered at a camp. This certificate possesses the aged, musty smell that is so characteristic of old documents that seem to hold within themselves layers upon layers of history. The inked words – refugee, relief, rehabilitation – have slowly faded over time, but remain just as impactful.

Bauji passed away in 1998, at the age of 94. He had lived a long and eventful life, and had made an incredibly tough decision to migrate during the Partition in order to secure what would hopefully be a better life for his family. Fittingly, he died at home, surrounded by his children, grandchildren and great-grandchildren. At that time, our grandfather had just retired after years of dedicated service to the Railways, just like his father. In so many ways, bauji’s choices shaped the way we grew up, the opportunities we got and the lives we now live.

In 1947, this certificate marked our family’s identity as citizens of a newly independent India. Today, it stands testimony to their resilience and fortitude. Bauji led his family through one of the toughest periods in the subcontinent’s history with courage. The simplicity, integrity and diligence with which he lived his life set a standard that the generations after him have aspired to uphold.

When Google Earth was launched, the first thing our grandfather did was search for Chak Maluk. He spent the next few days looking at every mohalla he had visited as a child, every field he had played in, and every city they visited in summer vacations. Both of Bauji’s offices – the DS Office in Multan, as well as the one in Rawalpindi – are still Divisional Offices of the Pakistan Railways. When we first looked them up on Google Maps, it seemed almost incredible that our bauji had spent so many of his years these distant, faraway places – he had walked in these corridors, signed papers in these rooms, shared chai with his colleagues in these very lawns.

For us, finding this certificate and learning about what it stands for has meant asking more questions about the larger idea of conflict and the impact it has on people. After living through a partition that didn’t just divide a land but also divided its people, fuelling hatred and violence, we wonder how Bauji would have looked at today’s India. Over seven decades have passed since then; we live in a world drastically different from his. Would he be proud of us?