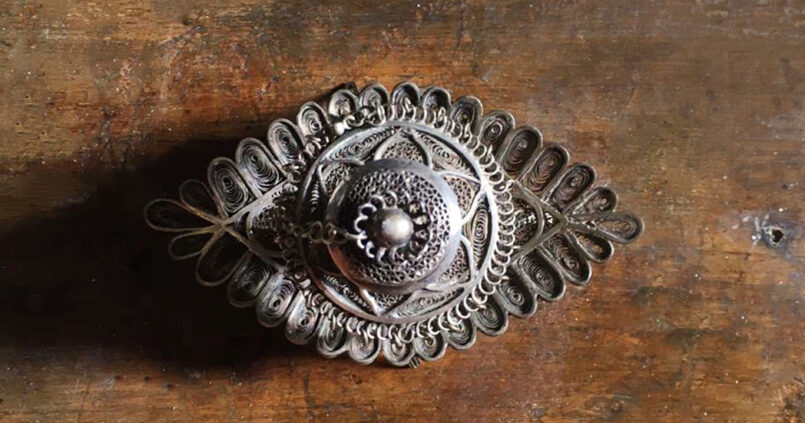 A Sindoor daani or fondly called a ‘sinhora’ in the languages of Bhojpuri, Maithali and Magahi, can be seen placed on every married woman’s dressing table. This little container stores rich red vermillion powder applied above the bindi and in between the hairline. Other than playing a very important role in a married woman’s everyday beauty ritual or shringar, it is used in rituals and festivals across the subcontinent, particularly on the eastern side.

In Bihar, where my family is from, the festival of Chhath- worshipping the sun god and the female deity called the Chhath mata is celebrated with great enthusiasm. Women who observe the 36 hour long fast of Chhath go to the banks of the river Ganges; they take dips in the holy water of the Ganges and pray to the setting and the rising sun and as is customary, they apply bright orange coloured sindoor from the tip of their nose to all the way up to the top of their head. This unconventional length of the sindoor signifies longer and healthier life of the husband. Till date in the rural areas of Bihar, all married women apply orange sindoor instead of the red one, not only on themselves but also on female deities that are worshipped throughout the region. The orange sindoor is  made of turmeric, mineral lime, water and mercury sulphide. Mercury sulphide naturally occurs in cinnabar, which is powdered and then mixed with different natural ingredients for the perfect colour. Despite being toxic, this mercury sulphide is cool in nature. When sindoor is applied on the bride’s hair partition, the mercury cools the body down and makes her feel relaxed.

The festivities of Chhath Puja

Historically, sindoor and the box that held it bore a great importance in the society as a sign of social status of the family. Zamindars in Bengal got beautifully carved sindoor daanis made of gold and silver studded with gems and precious stones for their daughters, while the fishermen and the forest tribes made theirs out of wood and bamboo which were later meticulously painted and decorated. As time passed, the importance of these precious receptacles began diminishing. There could be many reasons for this; the most important one being that now vermillion may be seen as sign of patriarchy and male-dominated society. Another is that women these days simply may not want to apply it, making it a consensual choice that differs from person to person, region to region. Traditionally however, – the sindoor daani has played a significant role in a married woman’s life and in Hindu weddings in general.

My maternal grandmother Rajkali Devi will turn 90 this year. She was born in Bihar and her husband’s house was in a small village near present-day Dhanbad, Jharkhand. Her four children are Bharat, Kamla, Lakshmi and Rajesh; Kamla is my mother, second eldest of all her siblings. She was married 1974 and it was during her bidaai (farewell) that, my grandmother presented this beautiful and exquisite piece of silver to her.

For the longest period of time, this sindoor daani was kept inside my mother’s cupboard unused. As a child, I always wondered what it was meant for. Whenever I’d ask, she’d tell me that though she used it during the first year of marriage, it was too precious and ornate an item for everyday use. From there on, it lived in her cupboard. The minimal use is clearly evident upon examining the sindoor daani carefully, for the small compartment is still stained with the bright orange sindoor that a Bihari bride is supposed to apply in her first year of marriage. This colour distinction, orange instead of the ordinary red is what sets her apart from the other ladies, a marker that she is a new bride. However, women from rual Bihar – irrespective of how long they have been married – will still apply the orange sindoor instead of the red one.

When I ask my grandmother about the sindoor daani, she says, ‘I had made this for your mother fifteen years before her wedding was even finalised!’ It is so meticulously designed that it doesn’t at all look like an object of mere utility, but one that is of incredible ornamentation. Like an artefact you may find it in a museum.

About the design of the box, she tells me, ‘Your mother’s name is Kamla which means ‘lotus’ in Hindi. If you see carefully, this sindoor daani is made in the shape of a lotus. The stand looks like a big leaf, followed by a stem, and then a full grown lotus flower with a small compartment to store vermillion on the top. The cap is attached with a silver chain so that it does not get misplaced or lost. She clearly remembered the pleasant spring morning when the jeweller, Iqbal johri visited her. One in a million she called him, for she had never seen such a skilled johri before. My grandmother got married in 1943, at the young age of 13, and since, she had all her jewellery made by him. It was said that he had made all the jewellery of not only the Rajmata of Darbhanga Raj, but every other lady of note at the time. My grandmother remembers a time when there was no communal politics between people, where a Hindu family and a Muslim family would eat iftar meals together, as she often did with Iqbal johri and his wife. She even recalls keeping rozas every Friday during the month of Ramzan.

The day my grandmother discussed the design for the sindoor daani with him, the pair had sat in the courtyard of the house in Gomo near Dhanbad where my mother, Kamla and aunt, Lakshmi were playing close by. According to my grandmother, she had to draw the design eight times on a sheet of blank paper to make Iqbal johri understand exactly what she wanted. He agreed to make it, but took his time. After nearly two months, my grandmother was busy making pickles under the unbearable summer sun, Iqbal johri came to tell her that he had finished the piece. Very carefully, he took the sindoor daani, wrapped in a green cloth, out of his bag and presented it to her. It was perfect, just as she had imagined it. She paid him a sum of Rs. 150 for it and till date, she calls him a magician.

My mother got married in 1974, when she was sixteen years old. At that time, a system called the gauna (pronounced as ga-au-na) was prevalent, wherein the girl and the boy were married at a young age, but post the wedding celebrations, the bidaai or farewell only took place three to five years later, so that they both could grow up and complete their education. Only then, would the groom come back to the bride’s house with his relatives and the bride would be sent off to her marital home.

But my mother’s case was different, as her gauna was done only one year after the wedding. When I ask her why, she tells me that at the time, her ailing mother- in-law had wished to meet her youngest daughter -in- law. It was this way, that as a seventeen year old, my mother travelled from her father’s home in Gomo, to her husband’s in Kotraha.

At the time of parting, Rajkali Devi gave her daughter four things – the silver sindoor daani, a pair of heavy silver anklets, a big wooden sinhora full of orange sindoor and one of her silver toe-rings. During the farewell from her maiden home, my mother wore the silver anklets and toe-rings. En route to her marital home, she remembers holding the wooden sinhora in her hands, and keeping the silver sindoor daani, still wrapped within Iqbal johri’s green cloth in her luggage, between her sarees. When she reached the village, her mother-in-law took a pinch of sindoor out of the wooden sinhora, unveiled her and as was customary, applied it from tip of her nose to her head

Next morning, my mother scooped some sindoor out of the wooden sinhora and carefully deposited it into the silver sindoor daani. From that day onwards, she began collecting sindoor daanis and manages to pick up a new one from every place she visits. Today, she has a beautiful collection made from different materials and sourced from different places.

When I took out the sindoor daani to examine it, both my mother and my grandmother were sitting beside me. A tear rolled down my grandmother’s cheek when she saw it again. She asked where we had dug this out from, holding on my mother’s hand tightly. Then very carefully, she opened it. With a big smile on her face, she told us to clean the silver with lemon and Colgate powder, so that it may shine again. My mother has five daughters, and this being the only heirloom, will be bequeathed to her youngest daughter, my sister, when she gets married. Even though my mother knows very well that- being a lawyer, my sister may not apply sindoor to the court, but it is her desire to pass this heirloom as an epitome of their blessings and prosperity.