Who needs a Meat Shelf anymore? 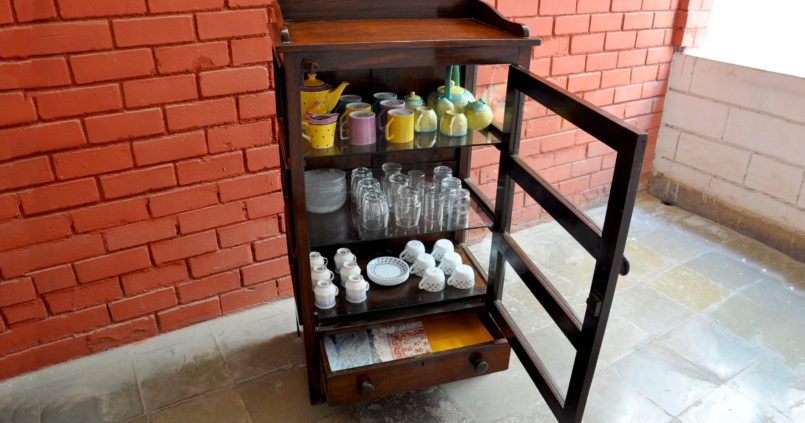 My maternal grandparents moved a lot of places in India during their life together, but started and ended in the same place – Bangalore. Bangalore is home and even to this day is precious, nostalgic and special to a whole host of Indians. Before Bangalore became the bustling city we now know as ‘Silicon Valley of India’, it used to have other more lucrative and inviting names – ‘the air conditioned city’, ‘city of lakes’, city of gardens’ and potentially a few more I am not aware of. When my grandparents first started their life here as a newly wed couple it was 1960 and Bangalore was called ‘The Cantonement City’.

My grandfather, Araza Kesava Mohan Rao, was a man of many talents and interests from sports to books but his work was that in the Office of Income Tax. He left every morning at 9am and would be home by 5pm. He was smart, quick, honest and proud. The post colonial lifestyle was deeply embedded in both Bangalore and Mohan – from the safari suits and sunglasses to driving around in Ambassadors under the canopy of lush green trees, Mohan had acquired a fine taste for the life in Bangalore. My grandmother, Araza Vayusutha (aka Sudha) moved here when they got married and their home was (in hindsight) clearly influenced by post colonial remnants – be it the four poster beds, using mosquito nets or even the meat shelf.

At a time when refrigerators weren’t readily available, the Meat Shelf was an extremely useful unit in every kitchen. It was surrounded with mesh on three sides and had three compartments and a drawer to store cooked food, vegetables and milk from getting spoilt and kept them away from rats, cats and cockroaches. This was possibly Mohan’s first purchases after he got married – a beautiful strong 3ft by 2ft rosewood meat shelf. Each leg of the meat shelf was placed in a tin foil with Gamaxin powder in them (ingenious of Mohan to think of it) so ants wouldn’t crawl up the shelf and enter it through the hinges. My mother, Mala, remembers this meat shelf traveling with them every time they moved through her growing up – Bangalore, Goa, Anantapur, Hyderabad and back to Bangalore. It basically saw my grandparents through their entire life as a married couple.

Mala received this meat shelf when she got married in 1987 and started living in her own new home in Bangalore. I grew up knowing it as a ‘meeshelf’ not fully understanding or questioning why it was called that. Neither, I think, did my younger brother. I remember having this meat shelf, forever, it is as much as constant as my family and family homes are. It always smells old but clean when you open it and I was taught to always handle it with care. Not because it was weak, but because its contents were always either edible which could spill or fragile crockery which could break. I’d always unhinge it delicately with my fingertips and open the door with minimum force, absolutely unlike the way we yank our fridge doors open nowadays.

While we were living in Delhi in 2001, I saw it receive its beautiful makeover in to a Crockery case at an old furniture restoration shop in Old Delhi. The creative mind behind this was Mala, who clearly saw she needed storage space for her shiny fine china, and didn’t need to store any edibles in an archaic meat shelf when she had a fully functional modernrefrigerator. The mesh on the meat shelf was replaced with glass and she introduced 2 glass panels inside creating 3 compartments and retained the rosewood drawer at the bottom. This meat shelf travelled with us as we moved, from Bangalore to Delhi to Hyderabad and back to Bangalore.

Still standing tall and proud as we near 2019, this 59 year old meat shelf stands pretty in the kitchen of one of Sudha and Mohan’s apartments in Bangalore. Such a remarkable significance of its life having come a full circle and we are not yet sure how many more years it has left. It is currently being used by Sudha and Mohan’s only granddaughter (yours truly) as she starts every morning with her favourite mug that sits pretty in what is now a rosewood crockery unit serving the third generation Araza at home.