The passing down of legacies 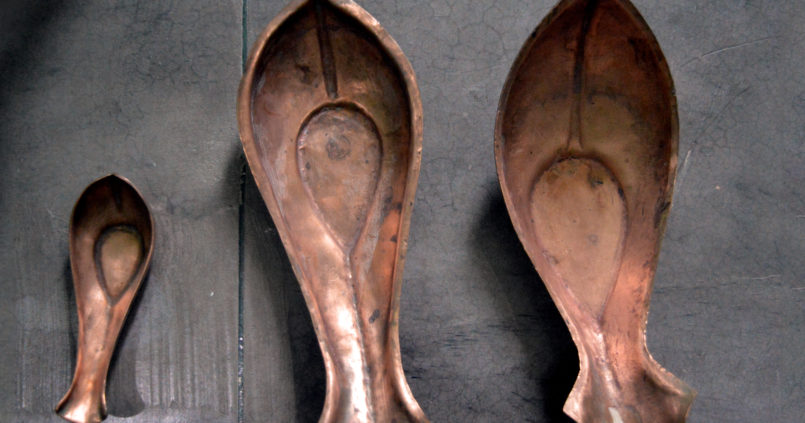 Bengali households often have a rich set of traditional items that are passed down as heirlooms from generation to generation. These are either pieces of jewellery, clothing, or any kind of utensil. For our family, it is the Pooja utensils that my mother received from my grandmother, and which my grandmother had once received from my great-grandmother. These unique Pooja utensils are something that every Bengali household boasts of; not only because of their beauty but also because of the names used for them. It is said that Bengali is one of the sweetest language, so, not only are our names are beautiful but the names of the objects we use are too. Like, Kosha, Kushi, Jalshankha, and Kulo. They are poetical in themselves.

These utensils are over 100 years old and were bought by my great-grandmother, Boroja Sundari Bose. She bought them in Varanasi in the early 1900’s, somewhere between 1906-1912. They have been passed to the women in every subsequent generation since, and since I am the only child, they will likely be passed down to me. For me, these utensils hold the long ongoing tradition of my family and the scent of my grandparents and great-grandparents. Within their aged metallic surfaces, live the memory and nostalgia reminding me of my roots.

I have a habit of taking out all the utensils from my grandmother’s old chest and prepping them for the festival season. My mother avoids using them all the time because of the importance it holds for her and my father, but I make sure they are used at least twice a year, during Durga Puja and Kali Puja (Diwali). All the utensils are either made of shells, brass, bronze, or copper because these metals are considered auspicious for Puja.

There are two Jalshankhas in which water is poured during a Puja ceremony and Tulsi leaves are added for purity. One Jalshankha is made of shell and the other one is made of copper. Then there are two Koshas and one small Kushi used during Pujas to put Ganga jal and flowers. Then there is my Mom’s favorite Ghanti (bell) made of brass and has Sheshnaag carved over it. The detailing in the bell has eroded  with time but the Sheshnaag head is clearly visible. Another utensil that has a Naag on it is the Pancha Pradip and it is made of Brass. It is quite heavy because of the purity of the metal used. There are two standing Pradeeps made of brass – quite heavy, but beautiful, nonetheless. The last item is the Kulo which is used not only in Pujas but also during marriages. It is one of the most loved items of my mom.

My father polishes them once a year but makes sure that that actual shine of the metal is maintained to keep the memories attached to them alive. He says they reminds him of his mother and grandmother, the soft and musky smell of her saree, her wet hair, and the smell of incense sticks in the Puja room every morning. When my grandmother sat for her prayers, my father would sit  down beside her while she chanted the Geeta Stotra. She used these utensils every day, but to keep them from losing their antique charm, my parents use them only occasionally. After they are used, my dad gently cleans them and keeps them back in my grandmother’s old chest and they stay there for yet another year, waiting to be taken out and be adored.

For my mother, it is my grandmother’s blessings and for me, it is the love I never actually got to experience because my grandmother passed away when I was 5 years old. All I remember about her is the soft white saree, her walking stick made of bull horn and how she loved narrating the Ramayana to me. When I inherit them, I will make sure that the tradition of rich Bengali culture and a Zamindari family is carried forward. I see these utensils twice a year and all I can say it that, ‘I have tears in my eyes every time I touch them.’