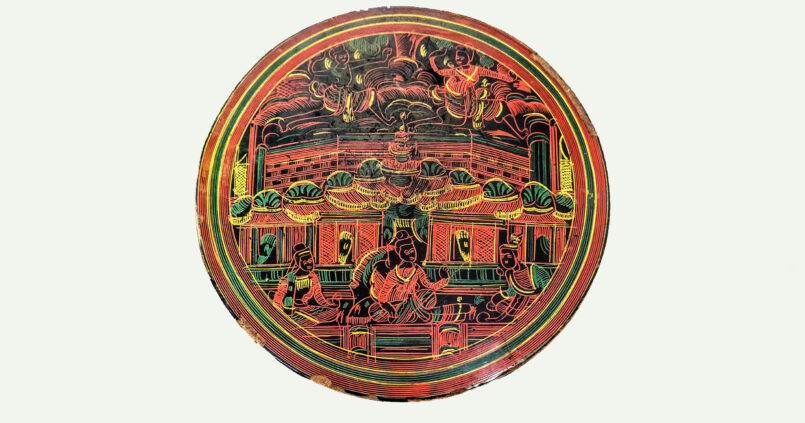 One of the few remnants of my family’s connection with erstwhile Burma (now Myanmar), is this lacquerware box, an inheritance from my maternal grandmother. When my mother, Manimegalai, got married, the box was a part of her dowry. But for long, it had been lying in a corner in our house, taken out and dusted only during special ceremonies like weddings or betrothals. Though the traditional use of the box in Burma was for storing everyday items, after moving to India, my mother and her family began using the objects they carried back either during rituals or for keeping flowers or fruits, simply as a way of reconnecting with their past. According to my mother, the box should have been at least 75 years old, before she passed away in 2015, so now it must be well over 80 years old. Each time, I see the box, I think of her, and the stories she would recall from her childhood in Burma, for her family was among the many Tamils who migrated there in the late 1800s and remained for generations.

It was my mother’s paternal grandmother, Meenakshi, who first migrated to Burma as a widowed petty trader when she was hardly 20 years old. The family originally was based in a small village in the Chettinad region of Southern Tamil Nadu. The Chettiyars, a mercantile community had been trading in the South East Asian countries even before the 1800s. Following them, a lot of other communities from the region also migrated to South East Asia in search of better prospects. The Chettinad region is a dry arid belt, often prone to drought, which pushed many peasant families, like my mother’s, to move to Burma, as they dreamt of being wealthy like the Chettiyars, who traded there.

Passports belonging to the author’s mother’s paternal grandmother, Meenakshi, issued in 1904 and 1916

This is how many Tamils migrated to Burma; most were traders big and small, but many also worked as labourers in the shops and businesses there. My mother’s grandmother used to trade timber from Burma and spent half the year there and rest in her village back in India. Later, my grandfather, Mr. Muthiah, worked in a Chettiyar’s timber shop in Burma, while he was only a teenager. Slowly he learnt the trade and set up his own timber shop, eventually becoming a wealthy businessman. He married my grandmother, Mrs. Sangu Muthu, who was also a migrant Tamil settled in Burma, and they had five girls and one son, of which my mother was the fourth child.

She and her siblings spent their childhood and initial days of schooling in Burma. Only in 1964, at the age of 13, did my mother come to India.  Even until she died, she remembered some words from the Burmese language. However, since the Tamil and Indian diaspora was quite large, Burmese schools taught Tamil and the family employed home tutors for practicing the language as well.

Wiping the dust off the beautifully painted box, she would often recall the quaint hill towns and the wooden stilt house in a small town called Pegu (currently known as Bago), where they lived, about 100 kilometers from the capital city of Rangoon. Apart from the many Tamilians in the area, they also had Punjabi neighbors, and together they built temples for deities like Murugan and Mariamman. It seems that every year the monsoons would cause severe flooding and people would remain indoors for months together. During these months, provisions were stored in numerous boxes of varying sizes and uses. Later when they moved to India, these boxes were among some of the items they carried, further gifted by my grandmother to each of her daughters, which is how this particular box found its way to my mother.

My mother’s box, it seems, was used for storing Areca nuts and betel leaves. It was apparently a ritual for my grandparents to chew paan after lunch every day and the box occupied a permanent space beside the dining area. Made of lacquer, the box is cylindrical in shape, measuring 11 inches in height and 9 inches in diameter. It is three tiered and opens into three round trays of black and dark maroon – two shallow trays about 2 inches deep and one large container at the bottom, which is 6 inches deep. There’s also a small lacquer bowl about 2 inches in diameter, used for keeping lime.

The most beautiful part of the box is the lid, which extends across the entire length of the three-tiered box, encasing it. It is covered entirely with intricate line drawings, depicting what looks like a scene from a kings’ court. There are three human figures, the central one seated on a throne, wearing robes that resemble a Kimono. The two other men flank the central figure, as if in a discussion. The upper part of the lid likely shows an extension of the same painting, where the two other men are shown fighting or chasing each other. The background is filled with the details of line drawings rendered into curtains and pillars.

Owing to its age, the box has worn down in some places, its edges are chipped and scraped, and the paint has lost its luster. Through some of the chipped portions, one can see the inner frame of the box made of woven strands, presumably of reed or a kind of thick wooden straw similar to bamboo. According to my mother, boxes like these were sold on the roadside by lacquerware artisans who would paint the surfaces right there, and apply a glistening coat of lacquer on it. Apart from these courtly scenes, some boxes were also painted with scenes of animals and birds.

In 1942, the Japanese army that had fought to free Burma from the British, turned to now invading and conquering Rangoon. Soon, the Burma Independence Army, allied with the Japanese, gained dominance and an interim power was constituted. However, the British continued military campaigns in some parts and the years from 1942 – 46 saw turmoil and uproar among the various factions.

My mother used to recall that after Burma gained independence from British rule in 1948, the country succumbed to internal conflict between the communists and the Socialist Party. Though many Indians fled during WWII, the conflict largely affected the areas around Rangoon, and the town of Pegu in lower Burma region where my mother’s family lived, was relatively safer. But even as the insurgency was brewing, Indian migrants were discriminated against by the military Junta, as the call for Burmese nationalism grew louder.  In 1962, the army took over the rule and the civilian government was toppled. The coup d’état led to widespread violence against immigrant-owned businesses and firms, as a step towards limiting foreign influence on economy. During this time, the town of Pegu also became a hotspot of violence.

(L-R) The author’s mother, Manimegalai (L) and aunt, Sinthamani posing in a wooden toy car at a studio in Rangoon; Transfer certificate of Sinthamani from the Burman Baptist Middle School in Pegu; Wedding invitation of the author’s eldest aunt Indera, printed in the Burmese language and English

The wealthy Chettiyars had already begun to offshore their earnings to India while the less-fortuned labourers fled right after the independence. Despite the threats closing in, some Indians decided to stay back in the hope of things getting better, including my mother’s family. However, in the years after the military coup, amidst a mass exodus of the Indian community, my mother’s family fled Burma in 1964. I got to know a bit of this history from my Periamma (my mother’s elder sister) Ms. Chintamani, who has carefully preserved the Union of Burma Airway tickets and notice to my grandfather from the Immigration Officer of Pegu, and few other letter correspondences, seeking flight tickets to Calcutta.

They had to leave behind everything – their houses, the temples they had built, the businesses they had grown and whatever fortune they had made. They carried whatever little would fit in their bags, along with mostly memories. That is how this box travelled all the way, tucked inside lugagge on a flight from Ragoon to Calcutta and on a week-long train to Madras, and further still to Madurai, from where my mother’s family travelled on a bullock-cart to their native village in the interior Sivaganga district of present-day Tamil Nadu. It was the first time my mother had arrived in her homeland, India. Laying her eyes on the Cauvery while crossing it on the train remained etched in my mother’s mind as one of the first striking memories of India.

(L-R) Vaccination certificates of the author’s grandparents, Muthiah and Sangumuthu, issued by Traders Travel Service, Rangoon, which also had a branch in Calcutta; An envelope of the All Burma Indian Congress of which the author’s grandfather Muthiah, was a member.

Today, the name ‘Burma’ sounds distant to me, as a land that’s geographically far and emotionally alien. It’s almost strange to think that three generations of my family had such close ties with the country, with some relatives still continuing to live there. But, Burma too, finds place every now and then in our lives. Such as in the Kavuni Arisi halwa (a sweet made of black sticky rice, that was picked by the Chettinad people from Burma), which is a part of the feasts in our family; or the old black-and-white photographs in family albums, clicked in the studios of Rangoon; or even in the names of my mother and her siblings – Manimegalai and Chintamani, both of which are Tamil epics inspired by Buddhism; or in this box that sits in my living room, next to my mother’s portrait, holding century-old memories of migration in its tiered trays, immortalizing in it an important part of my family’s history. 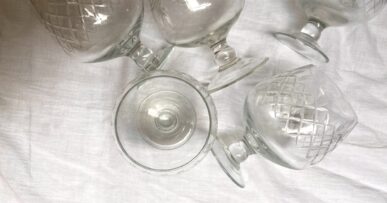