A whiff of ittar 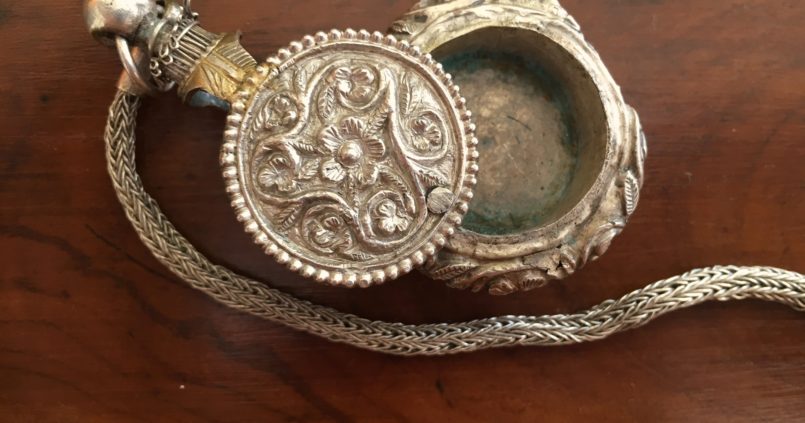 The only memory I have of mama, my grandmother, Chandrika Devi, is an old photograph of hers, taken at the time she was dying. In 1968, no one in the immediate family owned a camera and somebody was sent over to summon a photographer from the nearby town, to take a picture of the dying woman, as was the custom in those times. This only picture of hers, with paan-stained mouth, is similar to another photograph of my great-grandfather, also during his last hours, which indicates two things: that people in my family loved paan, and that families which could not afford a camera and wanted to keep something of their loved one as a keepsake, resorted to this practice of having photos taken of the dying during their last moments. For those were times when owning a camera was a luxury and people went to studios to get photographs clicked. Such morbid photos of those long gone, with eyes half closed, near death are still found hanging on the walls of homes or in old photo albums.

Later, when my uncle, Panna Lal, got a job in the allied services, he bought a camera after saving up for months and with it, he clicked a lot of photos of my grandfather. It is known that my uncle loved photography but his wife, my aunt Manju, says that when my grandmother died, they could not reach the village in time to see the last rites being performed, and hence the only living memory of hers became that last dying photograph. That Panna Lal became such an avid photographer later, could have been a direct result of the fact that he could not see his mother towards the end, and hence vowed to click as many photos of his father to keep, if only, for posterity.

While growing up, I would often look at this grainy, old black and white photograph of my mama, Chandrika Devi, that hung somewhere on the walls of my ancestral house in Pagra, a village in North Bihar, and would wonder what she had been like. She died at the age of 42, a year after the marriage of her eldest son, Panna Lal to Manju. The marriage of her only daughter, Neelam, a few years earlier, had not yet led to any children and hence, she died without seeing any grandchildren at all. My father, Sunil, the youngest of her three children, was merely 14 years old at the time of her death, and hence, perhaps most affected by her early demise.

My childhood memories consist of our paternal house in Pagra, an amla tree, my parents, a brother, and a retinue of household helps with names like Tejan Kaka, Panchu, Doman, Palat, Koyli Mai, who all had stories to share about mama, based on which, I often wondered what life would have been had she still been alive. My grandmother was born in Chandpura village, Hajipur, in an affluent family. The daughter of a flourishing transport businessman, who owned an ambassador and a fleet of buses, the dowry my grandmother had received, was the talk of the village till many years later. For even as a child, Koyli Mai would tell me about my mama’s stock of silver, which had arrived in huge bamboo baskets.

I have faint memories of summer afternoons when an ittarwalla, a man selling aromatic oils and perfumes – ittar – would arrive from Awadh with a black briefcase. I remember peering inside his bag and admiring the various vials and bottles, with strange names and a myriad of smells. My parents would buy small amounts of a certain ittar from him and fill it in glass jars that had globular lids, which were then placed inside a wooden ittardan, a small rectangular box made to keep ittar.

The sheesham box, 7.5 inches in width, 3.5 inches in height and 4.4 inches in depth, had once been a part of my grandmother’s bridal trousseau, I was told. It had bronze inlay work in geometric motifs on the top, while on the inside was a cardboard case, covered in maroon velvet, with eight round slots to hold the ittar bottles in place. I still recall the animated expression on my father’s face as he taught my mother and me how to dab some ittar on a piece of cotton and rub it on the wrists, over the clothes and then keep it inside the ear. It became very clear to me that my father loved such visits by the ittarwala, as for him this was a way to keep his mother’s memories alive.

A few years later, I moved out of my village home for the purpose of studies, and as a result, many of the old traditions that were once regular and held very dear, like yearly visits from the ittarwalla, gradually dwindled. Over time, I completely forgot about the ittardaan and the intimate world of perfumes, their application and my grandmother.

It was in 1997, when I rediscovered this box, during one of my visits home. I found it kept inside an old meat case, another lingering item from history – a wooden cabinet with wire mesh, constructed to keep milk and other food articles overnight away from the reach of the prying cats. The ittardaan now looked old and musty and a layer of patina had grown over the bronze inlay work on the top. I cleaned off the surface and found the inlay work, still intact, which strongly reminded me of my growing up years and our visits from the ittarwala. The maroon velvet was worn out and the wood was gouged in places. The glass bottles were still inside, though, but were eventually lost over the years when my parents had to shift house during the family partition in 2009.

In the same year, while looking for property papers inside an old, iron box, my family discovered another ittardaan from the past, also belonging to my grandmother. 2 inches in height and 1.5 inches in width, this was a round, pendant-like, intricately engraved in pure silver that came with a chain and a hook. On the top, was a screw, which upon opening, revealed space for keeping solid perfume or maybe just cotton dipped in ittar. The hook suggested that it was worn like other pieces of jewellery, perhaps on hooked onto one’s clothes or as a necklace or bracelet.

Years later, when I was getting married in 2011, my father got both the ittardaans cleaned and polished, and gave them to me as keepsakes of my grandmother. I carried them to my home in Delhi as a loving reminder of a woman whom I never met, but who had shaped the tides of my life and those of my family. Even today, when I open the box, a whiff of old perfumes greets me, a reminder of all the time that has elapsed.

Today, I have a child and he is lucky to be surrounded with both set of grandparents who love him the way a grandchild is supposed to be loved and cared for. Back when he was born and both my husband and I were working, my parents volunteered to help raise him and he thus ended up spending the first three glorious years of his childhood in my ancestral village. When he would cry at night, my parents would show him the photographs of me and my husband and he developed a habit of asking questions about all those people whose photographs adorned the walls of the home. In the course of such conversations with him, I have showed him the single photograph of my grandmother.  Once he is a little older, I will also tell him the story of the ittardaans. And going by his fondness for my village and the people over there, I am sure he will love it in the same way that I always have.